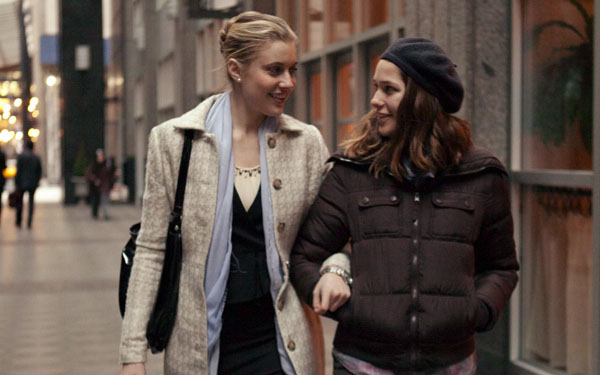 Gerwig and Baumbach: The Masters of Indie on Mistress America

For college lit student Tracy (Lola Kirke), freshman year isn’t going quite as well as she had hoped. Her classes are a snore, her roommate is rude, and she was rejected by the literary society she was heart-set on joining. But things look brighter when she meets her decade older stepsister-to-be Brooke (Greta Gerwig), a New York sophisticate who dazzles Tracy with her cool cosmopolitan life, hip friends and entrepreneurial ambitions. But appearances are deceiving, and Tracy intuits that Brooke’s friendships run shallow, her business schemes are half-baked, and her motor-mouth philosophizing is more neurotic than insightful. But this only makes Tracy look closer, as Brooke’s trainwreck of a life gives her the one thing she craves most: something compelling to write about.

Of course, keeping her front-row seat to the Brooke show means Tracy must maintain her illusion of wide-eyed admiration–just as Brooke maintains her illusion of keeping it all together. Can this pair bond within the confines of this mutual ruse-fest? That’s the central question in Mistress America, directed by Noah Baumbach, who co-wrote the script with Gerwig.

But what begins as a meditation on female friendship veers sharply towards screwball farce when Brooke and Tracy venture to Connecticut to ambush Brooke’s wealthy ex-boyfriend Dylan (Michael Chernus) and his fiancé Mamie Claire (Heather Lind), asking them for money to finance Brooke’s pipedream of opening a combination bistro/hair salon. Her idea is as wacky as the random cast of characters that pops in and out of scenes, including a gaggle of pregnant book-clubbers, and the next-door neighbor who barges in, just because. And when someone discovers Tracy’s manuscript—written on onion skin paper, no less – the entire group critiques it, then subjects Tracy to an impromptu psych evaluation. It’s all very Noises Off, and it’s funny as hell.

Baumbach and Gerwig sat down with Creative Screenwriting to tell us more.

Mistress America features several scenes of people appraising each other’s written work. Do you personally enjoy getting notes on your scripts from other people?

Noah: At this point, I only show screenplays to people whose notes I’d like, and the same people who financed Mistress, Francis Ha and While We’re Young were people I already had relationships with. I like getting notes from people like Greta, if she hasn’t co-written it with me.

Greta: Since I started writing with Noah, I realized that most professional writers who are good at it relentlessly seek out the opinions of people they trust. “Is this working? Could this be better? Is there a better joke to be made here?” They don’t open themselves indiscriminately to anyone, but they consult a core group of people. Because I think there’s a kind of mythology of people going away to write something on their own, and then emerging with this perfect thing. The more I know about writers, the more I find that that’s really not true.

Let’s discuss the pathology of Brooke’s verbal hegemony, where she’s almost monologuing, versus dialoguing. Is this Brooke’s attempt to be the alpha dog, or is she so quick that she processes interactions faster than those around her?

Noah: Well with Brooke, she thinks conversations are like: “Here are things that I’m doing.” There’s just so much presentation in her. So much performance. And she is funny and she is intelligent, even though she’s also sometimes preposterous. But that’s just how she experiences communication.

Greta: Also, the give and take of a conversation is vulnerable, and she’s built herself in a way that she doesn’t let in that kind of vulnerability, because that would interfere with the show that is Brooke, and the give and take would reveal her lack of confidence underneath this show. So she just keeps the train moving, because to get off the train would mean you’ve got to look at what’s actually going on, and that’s too hard.

So it would let people penetrate her façade and provoke thought into things Brooke doesn’t want to think about?

Noah: Which is ultimately what Tracy’s story about Brooke does.

Greta: Brooke defensively puts out hard things about herself, quickly and easily, but it’s almost a shield, like: “I didn’t go to college!” or “My mom died in front of me!” These things are not actually open for conversation. She’ll quickly put out something that looks like it’s sharing, but it’s actually shutting down sharing.

Brooke’s speech pattern is very rat-a-tat-tat. To ensure the cadence of dialogue rhythmically matched in editing, did you have a great script supervisor, or did you have a metronome in your own heads?

Noah: We had a metronome in our own heads, but that was also true in the script stage. Once we found a rhythm, initially for the character of Brooke, then for the other characters we introduced, it became a know-it-when-you-hear-it kind of thing. When I shot the film, rhythmically there was only one or two ways to do it. I mean, you could break the cadences into isolated parts, but in terms of getting from point A to point B, since we had a lot of blocking, we had to learn the notes and do them in that rhythm, because one thing affects another thing, and if one person starts playing a different note, it throws the whole thing off.

Greta: We would always read scenes out loud, and if something caught on our ear wrong, than we knew it should be rewritten. Then when you give it to an actor, it’s not like they’re saying it exactly the way you said it, but they’re playing the same piece.

Greta: In terms of the influences of other films, it’s not like we went back and watched them, but I’ve always had a sense of the screwball comedy stuff. I always loved those films when you feel an actor or a group of actors are almost riding a scene. It’s like they’re surfing a scene, with the words coming from behind them, and they’re kind of on top. It’s like they’re both chasing after it and driving it at the same time, which is a quality you usually get with theatre. But with some movies, like the way Carole Lombard and John Barrymore are yelling at each other in Twentieth Century, you feel like they’re riding this crest of language. That’s just exciting and informs everything.

When you were filming these scenes, did you have the actual actors off camera when you shot clean singles, to make sure everything precisely matched, take to take?

Noah: Yeah, we did. I was also conscious of shooting those scenes without many cuts. I mean there are cuts in them, but we went as long as we could go without getting monotonous, not unlike those screwball comedies, where you pick up the natural rhythm from body language and blocking, because it’s somehow funnier and more pleasurable for an audience that way. It’s like watching an action scene. You want to believe it’s the guy or the girl doing it—not that they cut it a million times. It’s not dissimilar with those kinds of dialogue scenes.

You have a recurring psychic character, and psychics are easy to lampoon. Did you hyper-realize him, or was he just a garden variety crystal-ball gazer? Because at one point he becomes transcendent and tells Tracy: “Spirit says you haven’t found your body. It’s five feet to the left and unhappy,” which was rather poetic. Tell me about writing this character as a cliché or not as a cliché.

Greta: …but he had to say the lines we wrote.

Noah: He learned the lines as written, and we apologized to him. But one thing we liked with the psychic, is that on one hand we we’re playing for laughs, like, “Of course Brooke would have a psychic.” But on the other hand, we would take it seriously–like you said. I mean, he actually does give Brooke the advice she needs to go to Mamie Claire, and it’s something that ultimately turns out to be beneficial to her.

Noah: We like him, so when Tracy goes to him at the end, you feel like she’s in good hands.

Greta: There’s a certain quality with the psychic, where he sort of feels like a podiatrist or something. He’s just a guy living in New York.

At the end of the film, Brooke has procured a copy of the literary magazine containing the short story Tracy wrote about her, against her wishes. In my mind, Brooke is either curious to see how the article turned out, or she harbors a tinge of pride over Tracy’s submission. What was your rationale for Brooke having this in her possession?

Noah: It’s something that we spoke about, that even though Brooke experiences Tracy’s story as a betrayal, the fact is, it also frees her up. Because even in writing a somewhat-negative portrayal of Brooke, it’s clear that Tracy still loves her. She sees through her, but loves her anyway. For anybody, that can be freeing.

Greta: There’s also an element of being flattered by it. Even though you’re angry, you’re also flattered. Brooke is the star of the story, which is all she’s ever wanted to be: the star of somebody’s story.

And Brooke doesn’t have to keep up her façade anymore, because Tracy rips it down.

Noah: And what we liked about their conflict is that neither ever really cedes ground to the other one—even up until the end.

Greta: Tracy says to Brooke: “I’m not really that sorry”.

Noah: We like that they have a real fight, and that it’s a fight where nobody’s necessarily right or wrong.

Greta: But they still love each other.