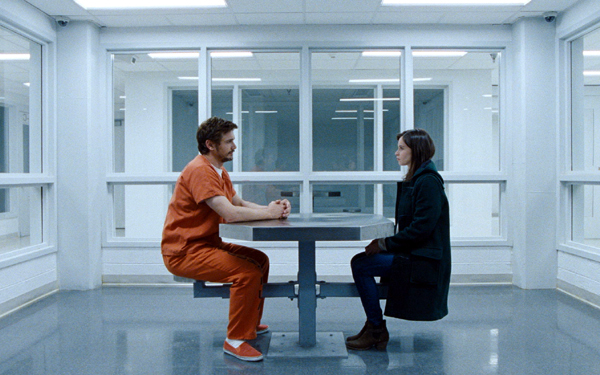 Getting That Kubrick-y Feel: Rupert Goold on True Story

What’s creepier: the guy who murders his family in cold blood, or the disgraced journalist who fixates on him? This question is the driving force behind True Story, the new film written and directed by British theater guru Rupert Goold. Based on the memoir of ex-New York Times reporter Michael Finkel, who was shown The Grey Lady’s door after he was caught fabricating sources, True Story introduces us to quadruple murderer Christian Longo (James Franco), who curiously appropriated Finkel’s name as his alias, while on the run in Mexico. Post capture, Longo teased Finkel (Jonah Hill), with an exclusive scoop on who, ahem, “really” killed his wife and kids. But here’s the thing: Longo promised to spill the dirt only once his trial ended, years after their bizarre prison-visiting room courtship began. Until then, Longo kept Finkel on a short emotional leash by sending him a series of cryptic manifestos that led to nowhere. For his part, Finkel says he went the distance with Longo purely in pursuit of the truth. Only Finkel’s knowing wife Jill (Felicity Jones) seemed to recognize their bromantic foreplay for what it was: an excuse for her nebbishy husband to rub elbows with a handsome and charismatic killer. Longo has since confessed to the murders, blaming his actions on financial stress. He remains on death row, to this day.

True Story was initially adapted by screenwriter David Kajganich, until Goold took over with his own series of rewrites. Goold spoke to Creative Screenwriting about the themes that attracted him to this story.

With two extremely flawed characters—one an outright monster, was it important to show sympathetic notes? Or did you strive for absolute truth–especially since they are based on real people?

When I first picked up the screenplay, the prior writer and the producers had a very antagonistic, critical position against both men. Obviously Longo’s trespasses are self evident, but however appalling he is, we all know people who have been near circumstances like his, where you have a lot of mouths to feed and no money. So the movie is partly about shame and the effect of shame on men, and my way into the story was Finkel and his experience of being fired and humiliated at the peak of his career in his early thirties, which struck me as a very real and understandable mistake. Because if you have a fall from grace in your twenties, people say it’s a right of passage, and if you fail in your forties and fifties, it’s a mid-life crisis. But in your thirties, when you’re just flexing your muscles about what you want to do, losing everything strikes me as a very understandable emotional place.

All that said, the one thing these two guys wanted more than anything, was readers–literal and metaphorical. They just wanted to be read, and in each other they found the best reader of each other’s material. And I suppose, as an artist, I know what that feels like. We’re all trying to produce work that will be seen as we see it, with eyes like ours, and have it be as profound for the watcher as it is for the maker, and that can be a terribly complex and trapping situation.

They just wanted to be heard.

In writing the script, how did you nail the rhythm of the dialogue in these prison visiting room interviews between Finkel and Longo, knowing that these interactions were the crux of their story?

The great challenge, particularly for me coming from a theatre background, is that the film is superficially stagey is places, in that there are long, two-hander dialogue driven scenes without much movement. And maybe because I was so self-conscious about not wanting to make it feel theatrical, but wanting it to feel cinematic, I had lots of little visual and camera tricks, but the guts of it was going to be in the dialogue. I’ve done loads of Pinter and Shakespeare, where you’re often holding 45-minute long scenes, live on stage, and I had to fight quite hard to retain some of the dialogue, that on the page might look slight, like when they talk about Dr. Seuss. And a lot of this came out of the book—verbatim, between Finkel and Longo, and I would say, “Listen, I know this doesn’t seem to be about much, but the subtext–what’s happening off the line, carries the entire love affair of their relationship.

So with your stage experience, did you know when a scene would have rhythmically worn out its welcome and made for a natural cut to different scene?

Exactly. You’re looking for the right kind of rug-pull on the exit line. Obviously you’re thinking of the dialogue in units—little flurries of three- and four-line exchanges. But I felt it was really important, and my editor Chris Tellefsen was really great at backing me up on this, that we were brave about letting those scenes breathe, and understanding what Longo would subconsciously hide in a gesture or an unfinished word, and how Finkel responded to that, then how Longo in turn manipulated that response—we had to allow this to develop in the beat of the cut.

And what were your shooting rituals in getting all the coverage of these scenes? Did you have an A-camera and a B-camera?

All of the interrogation room scenes between James and Jonah were shot in a five-day period, and I wasn’t intimidated because I had made Shakespearean films for the BBC, with long page counts. But there was a lot of glass, which was important to the Kubrick-y look and feel of those spaces, but it meant reflections and everything else, so sometimes there was a second camera to shoot someone’s hands or something, but we wanted to get tight to the eye line, so most of those scenes were shot single camera. And also, we were shooting on film, which was interesting, because out of the whole shoot, this was the bit you’d most want to shoot on video, because it was so performance driven, so often on Jonah’s side, we’d run the whole reel.

James Franco on the set of True Story

There’s a powerful scene where Finkel’s wife Jill Barker confronts Longo in prison. Tell me about that moment.

It’s part of the gothic tonality of the film. You notice that there are no guards there and the lights are all out in the other cells. It’s a psychological experience rather than a representational one. I wanted a verdict to be given by the moral center of the film in an unconventional way — not in the conventional courtroom kind of way, with a jury and a judge. And of course we do have that, but I think the moral center of the film is Felicity’s character, who’s able to pronounce and give verdict on Longo. And I knew it was a slightly ripe Tennessee Williams kind of scene, but I felt that the moral framework of the film demanded it.

From a viewer’s perspective, it was satisfying to see Jill confront Longo and basically say: “You may have enchanted my husband, but I know who you are, and don’t you forget it.”

Yes, and I also think it’s like the wife going to see the “mistress”, to a certain extent. And Felicity is great. She’s a brilliant, brilliant actor, so I wanted to write up her part more, but we needed to involve her morally–not so much atmospherically, so I made that scene.

That makes sense, because Felicity said that she felt like the dynamic between Finkel and Longo was like a romantic relationship. Do you think there were true homoerotic underpinnings to these two men, in real life?

“Um…homoerotic is hard to…I mean, look, in reality, Longo is a very big, Aryan, square-jawed, alpha looking kind of guy, where Finkel is a smaller, wiry, Jewish intellectual. So you could say there was a coveting of form. And I think there’s a certain peculiar kind of male friendship, and yes, of course there was a homoerotic strain to it, but I think it’s more to do with a need for authentication. Finkel, like a lot of journalists—and indeed like a lot of people who work in the arts for that matter — Finkel is and was perturbed by authenticity, and once he lost his credibility, he saw this sort of Steinbeck mythic quality in Longo. And he fetishized that, in the same way that Longo fetishized his idea of this Norman Mailer-like man he thought he was meeting. So I think they were both looking for a kind validation because they both felt inauthentic at some level, and that strikes me as a very contemporary anxiety.