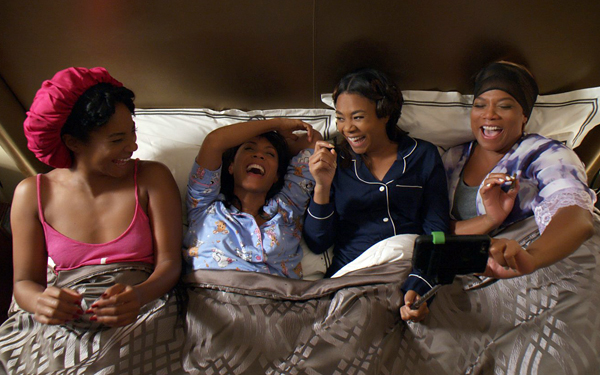 Girls Trip is a raucous comedy with a heart of gold in the vein of Bridesmaids and The Hangover, which follows four college friends on a weekend trip to the Essence Festival in New Orleans.

Written by Tracy Oliver and Kenya Barris (Blackish, Barbershop: The Next Cut), the film breaks down barriers and pushes boundaries, placing a star-led cast of African American women in a genre party movie.

How did this project begin?

It was a writing assignment. The producer Will Packer and director Malcolm Lee had told Universal they wanted to do a movie about black women set at Essence Festival in New Orleans. They sold the pitch – just the setting and that it would be fun, like Bridesmaids, but with black women.

Kenya and I came on as the second writing team hired. There was a first draft but the studio decided to go in a totally different direction, so we never saw that draft.

It was a clean slate, and all they gave us was – black women, New Orleans, party movie, go! The two of us came up with an idea that is essentially what the movie turned out to be – that is, something fun but really a love story between women. We wanted to focus on the relationship between the women, rather than make it a traditional love story between a man and a woman.

What kind of movies did you look to for inspiration to start?

Bridesmaids, The Hangover…movies I loved naturally anyway. Any movie that was a party movie or all in one night or a weekend.

What I found surprising was that I couldn’t find any movies with black women or people of color in those genres. I realized we had to be the first ones to make that movie. Everything I looked at was with a majority white cast.

Writing a movie centered on black women, did you feel the studio had any specific requirements that those writing a predominantly white movie would not have had to deal with?

We got really fortunate, because the reason producer Will Packer wanted to make this movie was to make it about black women.

Historically there have not been movies like this, because black women are put in this box…There’s a lot of respectability politics around how we portray black women. There might be religious overtones – if you look at Tyler Perry’s work. Or we’re portrayed as just really smart and empowered.

None of these things are bad, but there was a void of black women characters having fun and doing wild and crazy things. That’s who I am, I’m always the girl who drinks too much and says embarrassing things and does embarrassing things. I wasn’t seeing that version of my life on screen.

Will (Packer) wanted us to push those boundaries, and we never got pushback. The studio was like, “If we’re going to do this, let’s not play it safe, let’s go for it.”

In your essay last year for Cosmopolitan magazine, titled, “I Will No Longer Defend My Choice to Write About Black Women,” you mention a desire to write characters that are “transcendent and relatable to non-black people.” Was this on your mind during the creative process?

Yes, and I hope the numbers this opening weekend reflect that. The movies that I watch are oftentimes with white characters. If I, as a black woman, can watch Bridesmaids and see them as just people and really enjoy the stories, then so can white women when a movie centers on people of color.

A lot of the stuff I write is really diverse in terms of the characters’ races and backgrounds, but I feel like the themes and storylines are very relatable and not specific to black women, but specific to friendships and people having fun.

It turns into a self-fulfilling prophecy when you say “this is a movie for black women and white women won’t watch it.” It sets a tone where it’s OK for people of other races not to look at content that doesn’t feature people that look like them.

It doesn’t work in reverse. I’ve never said, “I’m not going to see The Hangover, there’s too many white people in it!” I have never approached a movie like that.

As a black woman I’m totally different to Bradley Cooper, but I can still find those movies relatable and fun.

I have been to a couple of screenings of Girls Trip, and it has transcended and reached people of all different colors and backgrounds. I hope people can move past their biases and just say, “I want to go see a fun movie tonight,” and forget about the fact they don’t look like the people on screen, or they’re a guy and this is a movie about women…

In your essay you said that you’ve often been asked to write more “mainstream characters”, knowing this really meant “white characters”. But with this movie that pressure was taken off the table.

Yes, and I think the success of movies like Hidden Figures and Fences has made studios more open to hiring black writers and having ideas featuring people of color in leading roles.

It wasn’t that long ago that I was being told that if I wanted to work in this business, I couldn’t write characters that look like me. That was heartbreaking. I love to write stories about people who are forgotten and not written about. I like to write with a purpose. I feel fortunate that a movie like Girls Trip can be made at a major studio now.

Did the sense of Girls Trip being a movie that hasn’t been done before, breaking down barriers, weigh on you during the creative writing process?

That part didn’t weigh on me during the writing process, but it does now. So much hinges on the box office for the opening weekend. And we all know that if this movie doesn’t succeed they probably will not make another movie like this for another decade. That’s how extreme this is.

Even Bridesmaids was tough getting off the ground, and it had to work. That movie opened the door for a slew of women-centric movies, but with Girls Trip we’re considered even more niche, because it’s black women. We’re hit on the gender level and a race level. Money talks and means everything. If it doesn’t work it will be much harder to sell something similar in the future.

The characterization is very strong and realistic with all four leads in Girls Trip. How did you work on developing these characters?

We knew we wanted to do something where everyone was very nuanced and layered and had distinctly different personalities, but also belonged in the same circle.

I’ve seen a lot of movies where you don’t buy the chemistry, or that these four people would even like each other. Or, they’re all so crazy unlikeable that you cannot imagine how they even have friends, period. I knew the characters at their core needed to be people that you, as an audience member, would want to hang out with.

There’s a trend right now with – “let’s make this person awful.” I didn’t want that. I wanted them all to be interesting and funny in their own way, and loyal to each other. Each have their quirks and different traits that make them very distinct. But, at the core, they love each other, and they’re there for each other during all of life’s ups and downs.

You can see why they’re all friends, even if Lisa is very Type A, a prude and conservative, whereas Dina has no culture whatsoever. My friends are all very much like that. I’m closer to a Dina myself, but I have friends who are very Type A and get to airports 3 hours early, while I’m always late and might miss my flight. But, still, we’re all friends.

I think you can create a character that is so unlikeable that you don’t want to watch them. I see that happening sometimes, where the characters are so wretched to each other, and just awful as human beings, that you cannot even be entertained by how much dislike they have for each other.

At the same time, characters can have flaws. We wanted to find those flaws, but still maintain their likeability.

How did you develop the friendship group structurally with the script to establish this much needed connection between the women?

From jump I knew these women had to be college friends. For me, college was the most fun I ever had. It was a time of debauchery and freedom. Your college friends are those that end up being your bridesmaid, or the ones you call when you’re going through a divorce.

We spend the first 5-10 minutes of the movie introducing their background, so the audience could innately understand that these are college friends with 20 years of history.

What was your process with working with a writing partner?

Thank god for technology! Kenya was on set with Blackish most of the time, so we didn’t have time to meet up in person. It was all about exchanging scenes via email and fitting in calls at lunchtime. The good thing about Kenya is that he’s pretty progressive and feminist as a guy, so whenever I had an idea some dudes might be uncomfortable with, he was happy to go ahead.

You’ve worked previously in television. Is there anything you learned from television that you’ve found beneficial to bring over to feature writing?

The best skillset I got from television is the speed at which you have to write. The first experience I had was on The Neighbors, and I was a staff writer. Staff writers hardly ever get an episode, but I got 2 that season.

The speed a network show goes is crazy. There’s no way you can mull over an idea for days. You have to write and then be in production so quickly.

Before that experience, I would spend a ridiculously long time perfecting one piece of dialogue. I would sit on pages for weeks. In television you have to get it done – there’s no way that if a line isn’t perfect the episode won’t move forward. It’s a mix of art, business, and efficiency.

I’ve brought this over to feature writing – it’s a job that I have to get done quickly. I have removed the emotions and hang ups I had before and I just get it done.

Toks Olagundoye as Jackie Joyner-Kersee in The Neighbors

How did you test the comedy in the script to see if it worked outside of your partnership?

I have a couple of friends who I always trust to send stuff to, and so they got the early drafts. The one comment that they all had was that Dina was a breakout character, and the actor cast would definitely be a star. People were, unsolicited, telling me that Dina was a fantastic character and her first scene was very funny. At its core from the beginning, people thought these women were funny.

Finally, what’s next for you?

I love writing movies so I’m doing a couple more, but I’m also going to make my directorial debut on a script that I co-wrote with a friend of mine. It’s a love story, a romantic dramedy, set in LA, on a micro-budget.

I like movies like 500 Days of Summer that are quirky, fun, and romantic, but, of course, with people of color at the center.

Girls Trip is in theaters today.