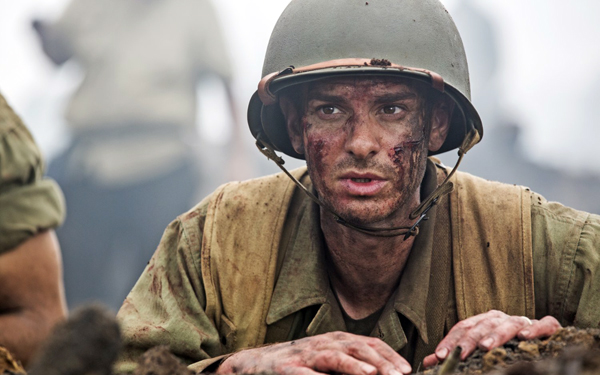 Hacksaw Ridge: 10 Years in the Making

Robert Schenkkan grew up in Austin, Texas, not far from Johnson’s hometown of Stonewall, Texas. Though Schenkkan initially started his career as an actor, he later increasingly devoted himself to writing. His one-act play series The Kentucky Cycle, which covered 200 years of three intertwined families in the Appalachian Mountains, was awarded the 1992 Pulitzer Prize for Drama. He also found success on film and television, writing 2002’s The Quiet American and episodes of TV’s The Pacific.

Schenkkan co-wrote the screenplay for Hacksaw Ridge, a World War II drama about the first conscientious objector to be awarded the Medal of Honor, the highest honor in the U.S. military. The film, which was directed by Mel Gibson and stars Andrew Garfield, debuted at the 2016 Venice Film Festival to an extraordinary response.

Creative Screenwriting spoke to Schenkkan about why Hacksaw Ridge took ten years to realize and is “unlike any other war story you have ever seen in your life.”

Hacksaw Ridge, which received rave reviews at the Venice Film Festival. Can you talk about your work on that screenplay?

I worked on it for about ten years, or as I like to say after that standing ovation at the Venice Film Festival, “One minute of applause for every year of my life I spent on this project.” [Laughs]

I was hired in 2006 by the producer, Bill Mechanic. He and David Permut had acquired the life rights to Desmond Doss, who was the first conscientious objector to be recognized with the Medal of Honor for his extraordinary heroism at the Battle of Hacksaw Ridge in Okinawa.

I loved the material from the beginning. It’s an unbelievable story. You have a character who is so unique. He is deeply religious, but not in any claustrophobic way. He’s not there to convert the heathens or sit in judgment of anybody else. In fact, he’s seemingly uneasy about his own salvation.

Simultaneously, he’s intensely patriotic and desperate to serve his country, and not in any of the approved safe avenues available to a conscientious objector at the time. He wanted to be in combat. He not only won’t kill – he’s a pacifist – but he won’t carry or even touch a gun.

Oh yeah, and he’s also a vegetarian and doesn’t work on Saturdays because that’s his Sabbath. [Laughs]

Imagine the U.S. Army in the middle of World War II dealing with somebody like this. Talk about a fish out of water! Of course, they did everything they could to get rid of him, and yet this man goes on to display a level of heroism that few of us will ever come close to. It’s a war story unlike any other war story you have ever seen in your life.

It’s a great character and a really compelling story, which happens to be true. It comes at a time where there’s so much violence in the world, and so much of that violence is centered on religious grounds. Here is somebody whose religious faith is predicated on one of the oldest religious laws there is – to love thy neighbor. That’s great cinema.

Truthfully, I joined up in 2006 having no idea that the journey was going to be as long as it was! [Laughs]

The reason for that is that even though I wrote the script pretty quickly, we were set up at Walden Media. Walden’s one rule was no R-rated movies. We sent my script out and the response was immediate and enthusiastic, and we had a number of A-list directors say that they’d love to do it. But as soon as they heard that restriction, they would just throw up their hands and say they couldn’t shoot Okinawa as a PG-13 movie.

We were stuck in this awful, frustrating limbo for a long time. It wasn’t until many years later that Bill was able to get the rights back and we were able to go forward unencumbered.

What was interesting about all this is that when Bill hired me in 2006 and asked who I would like to shoot the film, I said Mel Gibson, little knowing that it would be years before that would happen. I just think he’s done an extraordinary job.

Mel is a terrific filmmaker, and Andrew Garfield is going to be up for every award. Mel fills the screen with action but keeps your focus exactly where he wants the focus to be. Above all, he keeps the emotional heart of it alive. He’s not just blowing shit up and throwing bodies around – he is telling stories in the action itself.

This article is an excerpt from a longer interview with Robert Schenkkan:

Chopping in High Cotton: Robert Schenkkan on All the Way and Hacksaw Ridge