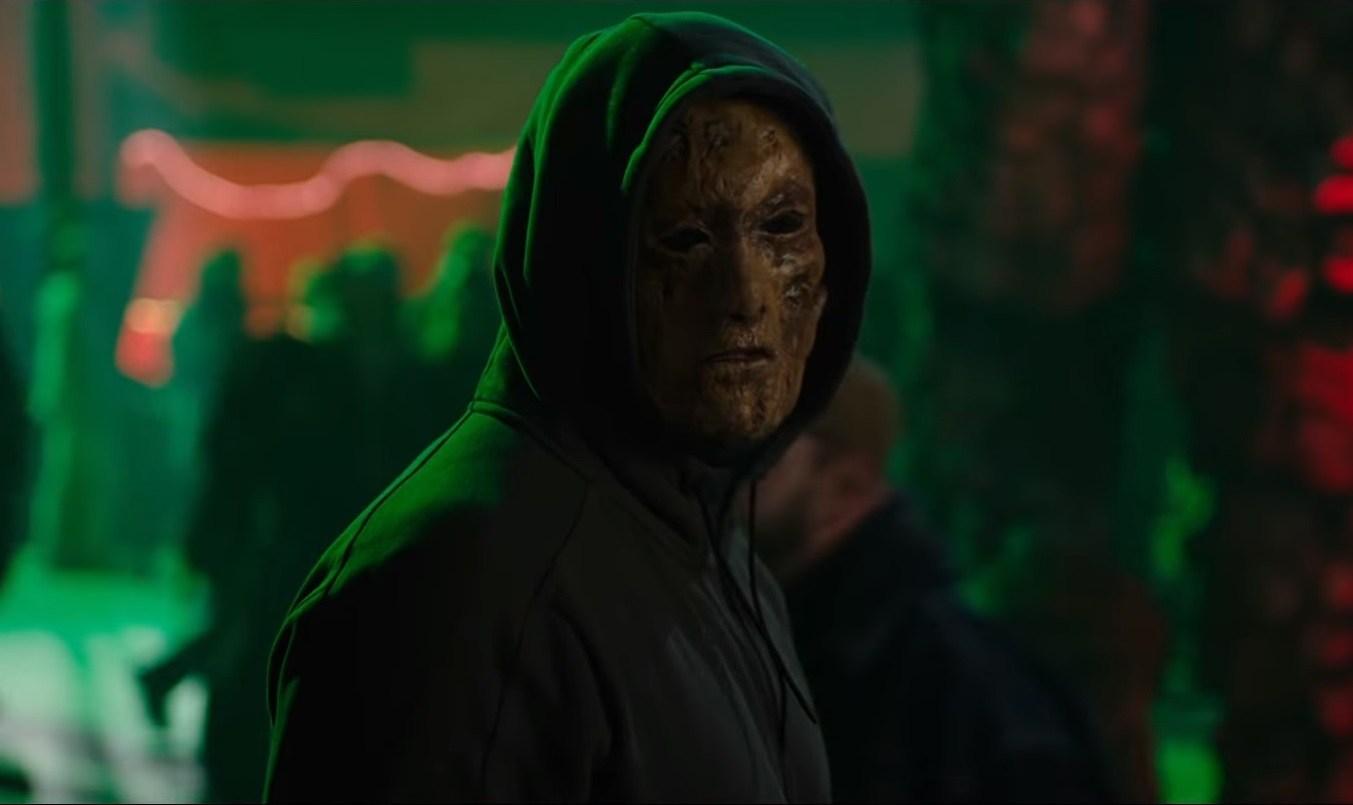 The new film “Hell Fest” isn’t very scary, but it does make for a fairly enjoyable riff on all those middle-of-the-road frighteners that dominated the horror genre in the 80’s. In this one, three couples venture to a traveling theme park dubbed “Hell Fest.” Even a casual horror fan will recognize most of its tropes. All the teen characters are stock figures, there are a multitude of cheap jump scares, and its lumbering villain is a dude in a mask. The movie does have crisp cinematography and detailed production design, but the screenplay and direction aren’t as expert. It’s not bad, but it’s not particularly good either.

You’d think having five writers would have enabled some fresher thinking than what’s here, but too much of what was written by Seth M. Sherwood, Blair Butler, William Penick, Christopher Sey, and Akela Cooper is paint-by-the-numbers. (Then again, five screenwriters on a project is never encouraging.) They have a good premise with the theme park, chock full of scary rides, dark mazes, and actors in costume playing monsters and miscreants, but it mostly squanders the possibilities. It may be a great setting, but what happens there is far too familiar, even cliché.

The clichés start with the main character. Natalie (Amy Forsyth) is studious and down-to-earth, so of course she must be the heroine of the piece. She’s also the one who’s suspect of such a place as Hell Fest as her overly enthusiastic and guileless, party-minded friends drag her to it.

The boxes checked among her crew are the obvious mix of types in such films: bestie Brooke(Reign Edwards) is sassy. Brooke’s boyfriend Quinn (Christian James) is hunky. The comic relief is supplied by horror lovers Taylor and Ash (Bex Taylor-Klaus and Matt Mercurio). Even Natalie’s potential love interest Gavin (Robin Attal) is exactly like her, so of course they’re a perfect match. The characters act like scoring tickets to “Hell Fest” is akin to getting front row center seats to “Hamilton” and their shrill enthusiasm practically invites the bad guy to choose them.

And who is the baddie? He’s one of the ‘monsters’ walking around the park, in hoodie and dead-faced mask, who isn’t one of the actors making minimum wage for the gig. He’s a genuine serial killer, blending in with all the others, and he likes stalking women at the “Hell Fest” venue. That’s a clever conceit at least, as he’s just another ghoul in the crowd. Unfortunately, he seems to be a standard issue perv as you find in such films who doesn’t like strong, smart-ass women and thus targets them for his victims.

One girl who insults his less-than-intimidating garb early on at the park is hunted and dies quickly thereafter. The other who belittles him is Natalie and he decides to stalk her the rest of the night. But with her, he’ll take his time. Why? We’ll never find out. But we know that her friends will be offed in due course, so he can have her all to himself.

The baddie, played by Stephen Conroy, isn’t even given a name. He’s meant to blend in with the park guests and showmen with his almost generic appearance, but such blandness also prevents him from truly being terrifying. Any personality he’s given seems to be borrowed from “Halloween” or “Friday the 13th,” with his stilted steps and stiff body movements. He does whistle the childhood ditty – “Pop Goes the Weasel” with deliberate menace – but that’s about all he’s got going for him. That, and a pair of scuffed up shoes that will incriminate him later on.

The film does have some decent scares, like when the villain stalks Natalie into the john. Director Gregory Plotkin builds some taut tension there with silences, and crooked camera angles showing the baddie lurking above Natalie as she sits and pees, but most of the other scenes seem by rout. They all get stuck in too many rides and the bad guy seems to know every secret entrance. There seems to be no other guests around when it’s convenient for the script. And of course, the security people blow off Natalie’s concerns.

The few surprises come in the order of who gets killed and how. (Executive producer Gale Ann Hurd knows how to twist plots after her many years producing “The Walking Dead” and her influence shows here.) You’d think Gavin would be around till the final reel, especially after he and Natalie make out in a photo booth, but he’s the first victim. (It’s a gruesome one too to earn that coveted R rating.) And while the other deaths aren’t as fiendishly imaginative as those in the “Final Destination” franchise, most of them zig when you think they’re going to zag. It’s also cheeky that most of the rides and mazes are grosser and more lurid than the killer’s work. He’s straight forward with his knife compared to the Grand Guignol set pieces placed in ride after ride throughout the theme park.

At the end of it all, “Hell Fest” isn’t scary enough to give Jason or Freddy a run for their money, and it’s not meta enough to play like the “Scream” series did. It’s just scary enough, just funny enough, and just directed well enough by Plotkin to be acceptable, but uninspired entertainment.

View the trailer for Hell Fest below: