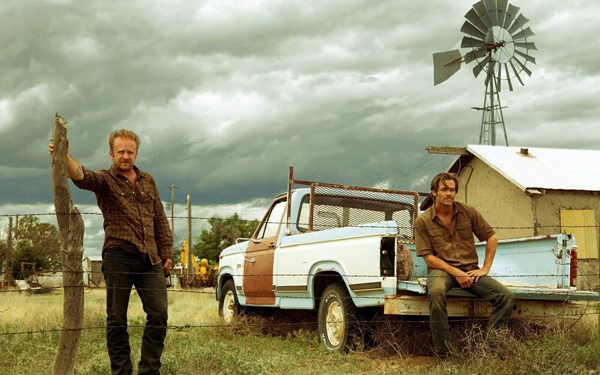 Taylor Sheridan on Sicario and Hell or High Water

It’s unique to see a film that gives actors the chance to truly act. In Hell or High Water, the second film from writer Taylor Sheridan, a divorced father and his ex-con brother pursue an unlawful act of desperation to save the family farm.

Set in West Texas, the film stars Chris Pine (Star Trek, This Means War) and Ben Foster (3:10 to Yuma, Lone Survivor) as the brothers Howard, while Jeff Bridges (The Big Lebowski, True Grit) stars as Marcus Hamilton, the Sherriff in pursuit of the duo.

Creative Screenwriting spoke to Sheridan about research, challenging the audience, and the importance of being selfish..

Chris Pine as Toby Howard in Hell or High Water

What led you into screenwriting?

As an actor I was on a TV series, and I had been on it for a couple of years. We were in the process of re-negotiating, and I had one idea of what I was worth and they had an idea that was vastly different.

My wife was pregnant, and I was doing the math and I was realizing that I couldn’t be living in a two-bedroom apartment in Hollywood for the rest of my days. I didn’t want to raise my kid there.

I had also reached the point where I was really tired of telling other people’s stories and I wanted to tell my own. I quit the show, and sold just about everything I owned and sat down and wrote Sicario.

How did Sicario get made?

That one scared people. They didn’t want to touch it. It unfolded in a really unconventional sense and really played with, “Who is the protagonist?” I did some things, character-wise, that are very unusual in film. The only character who arcs is Kate, from assertive to almost completely passive, which is a metaphor for the American conscience. That terrified studios, coupled with how dark the subject matter was in general .

The funny thing was, once Basil Iwanyk, the producer, who did The Town – he read it and those things didn’t concern him at all. He went out to first director Denis Villeneuve, who read it and he fell in love with it.

It came together incredibly fast after that, but the challenge was just finding someone who believed in it. Once someone stuck their foot in the pool, then everyone jumped in.

Where did that original idea come from?

There were a few things I wanted to explore, but it was really this notion of the rule of law and its convenient application based on perception and circumstances. We had a war happening with our closest cultural and economic neighbor that took as many lives as Vietnam in half the time – at least as far as American casualties – and you had to hunt to find a news article about it.

I thought we were ignoring it, because we didn’t have an answer – this unsolvable problem that ultimately rests with the consumer. That’s the ultimate responsibility.

What was the research involved for Sicario?

There was a lot of reading, a lot of time with people in the FBI and some guys in the military who have been involved in various missions and operations around the world. The thing is clear fiction, so it’s not based on any event, but there was a fair amount of boots on the ground work that I did.

Even though it was fictitious, set in my own version of Mexico, I wanted it to represent actual things that were happening, because there are so many people who have been affected by it.

Both Sicario and Hell or High Water are gritty stories with gray areas of good and bad. What makes you want to tell those types of stories? What genre are these films considered?

I don’t know if I’ve ever met anyone that’s purely good or purely evil, myself. I think most of us live with some varying degrees between the two.

To me, a purely good individual or purely bad individual, that’s a comic book, that’s a fantasy and I don’t do fantasy. I really want to reflect the world as I see it and play with the notion of “Who am I rooting for?” I think it’s a bit of a last frontier.

Everyone’s seen so many movies, the audience is so educated, and having been an actor for so long, you hand me any five pages from any script and I’ll tell you what the whole story’s about. I just really wanted to demolish the notion of “Who am I rooting for?” I wanted to really challenge the audience. Sometimes they like the guys who aren’t so good; sometimes they’re really frustrated with the guy who is good; and sometimes the clear hero says or does some pretty bad things.

I spent a lot of time doing really unimportant work as an actor, it was important when I started writing that I obviously make it entertaining or no one is going to go see it – but to really make you think, that is my goal.

These movies resemble a Cormac McCarthy novel or a Coen Brothers film. What are some of your influences when writing, through literature or other films?

Well, Coen and McCarthy are massive influences on me. The novelists have influenced me the most. Larry McMurtry’s (Lonesome Dove, Streets of Laredo) gift was creating these incredibly well-defined characters in a really brief period of time. Cormac McCarthy does the same thing. He is so sparing with writing and there such a desolate eloquence to it and he’s got such a gift and talent for it.

What are the movies that you watch over and over, year after year?

The Insider is one of my favorite films. The screenplay was sensational, the acting is incredible, the simplicity of some of the camerawork and yet the unusual angles they chose to enhance a sense of mood and a sense of shifting power between characters. And it’s so subtle. That’s Michael Mann.

I think Unforgiven is another one where he took the genre and just demolished it to the point that it looked like no one would ever make a Western again. Again, simplicity, the way with which that was achieved.

Those are two films that I go back to a lot.

Al Pacino as Lowell Bergman in The Insider © Touchstone Pictures. All Rights Reserved.

In what ways has your acting shaped the films? Does it change the way you write characters?

Absolutely. I spent my life as an actor, mostly on television, guest starring on this and recurring on that. When you do that on episodic television, you’re just plot-loading, “They went that-away!” That’s your job.

With an almost teenage rebellious nature in me, there’s almost no plot in my films. I try and come up with an extremely simple plot so I don’t have to explain it. This way, I can really focus on making the journey to get there rich and reflective and focus on the characters, because I spent so much time trying to make very perfunctory dialog sound interesting. I try to find very interesting ways to say ordinary things and it lets the actor build the character, even for smaller roles.

It gives me a little freedom to explore relationships in a way that you don’t necessarily always get. There would have been a way to make a waitress get a big tip from Toby that didn’t become tethered to the security of her family and then you wouldn’t see that hope of, or that sense of desperation, of needing someone to help her.

You can get as deep as you want. That’s why I try and dig just as deep for characters that appear in one scene as I do for the main characters.

In Hell or High Water, there’s a bit of mystery from Toby and Tanner. Some of that gets resolved throughout the film, but how much backstory is involved and how much do you want to keep a mystery for the viewers?

Obviously, with Toby and Tanner, you have just enough information to know what they could possibly have done so that you can fully digest the consequences of their actions .

You’ve had some huge names in your films. Do you ever write for specific actors or do you solely write based on the character?

What are some of your writing rituals, when it’s just you alone in the room?

I don’t want a wasted word. I don’t outline. I like to go on a journey and my writing style is that I don’t like to rewrite.

I rewrite as I write, so if I was to sit down and write the first five pages of a new screenplay, let’s say, then the next day I start at page one and read through it and then I spend three days refining those five pages, then you end up changing it, and it distilling down to two, and it kind of accordions out like that.

The funny thing is, around the midway point of the second act – if it’s a 3 act structure – it starts to really write itself, and the tone becomes so clear. A lot of times the tone will become so clear that you’ll have to go back and refine what you’ve already done that led to it.

Jeff Bridges as Marcus Hamilton in Hell or High Water

What do you find to be the most difficult part of the writing process?

It’s that bridge. It’s the middle of the second act, because that’s when any mistakes you made early on in the first act or anywhere else, that’s where they pop their heads up.

If you hit that wall of logic or the emotional journey of the character starts to feel like it’s wavering, the problem isn’t there, the problem’s thirty pages back, and for me, it happens with every screenplay.

That is the spot, and you can either try to write around it or gut check and go back and kill something you probably really liked. That seems to be one I always have to do.

Someday I’ll assemble all of what I think are the best things I’ve ever written – none of which seemed to make it into the final draft of the script, and I’m just going to piece them together and it’ll look like an Altman film… or a mess or something.

What’s something you wish you had known before you started screenwriting or what’s the key takeaway that a new writer can start doing tomorrow to make their writing better?

I had been in the business for so long and I had seen the consequences of a plot hole or a character flaw or something that wasn’t fully developed. And I had suffered that as the actor or had seen it on the screen. I was pretty merciless on myself from the first day I wrote the first thing.

But for 20 years I’d spent most of my time reciting lines by people that took shortcuts. Don’t take a shortcut.

I think to be a really good screenwriter, you have to be selfish, you have to write just for you. You’ll be your toughest critic, but trying to guess what someone else is going to like or want, that’s such a moving target. You’ll find yourself trying to write something that false.

Constantly remind yourself to write what you’d want to see and that you can’t waste a word.