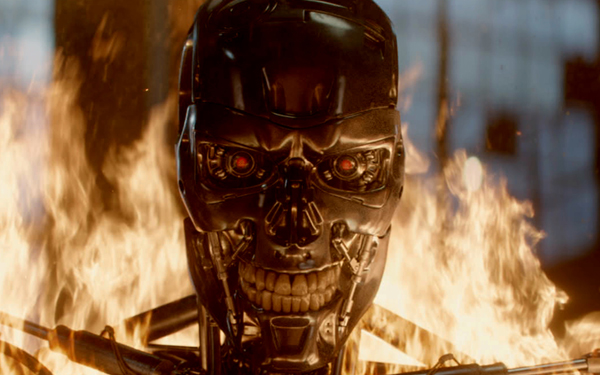 When screenwriters Laeta Kalogridis and Patrick Lussier were asked to co-write Terminator Genisys – the latest chapter in the saga of mankind’s war against the machines, the duo ardently declined. After all, the beloved James Cameron-created universe is sacred cinematic territory that Kalogridis and Lussier were loath to tread upon, lest they disappoint legions of fans – as well as Cameron himself. Sarah Connor, John Connor, and Kyle Reese, not to mention the titular cyborg badass – household names, are these. But Kalogridis and Lussier rose to the challenge, penning this fifth installment of the series, directed by American television writer and producer Alan Taylor.

While the actors in Genisys have largely changed, the characters remain the same. It’s 2029, and John Connor (Jason Clarke) leads the human resistance in a post-apocalyptic showdown against Skynet’s army of machines. But just when Connor and crew are about to secure a permanent victory, Skynet sends a T-800 Terminator (Arnold Schwarzenegger) back to 1984, to erase Sarah Connor (Emilia Clarke), before she has a chance to birth John into being, while John’s trusted lieutenant Kyle Reese (Jai Courtney) jumps time to save Sarah. If these strokes sound familiar, it’s because they precisely replicate moments from the 1984 film that started it all.

Loyalists are apt to nod nostalgically at a nakedly-buff Schwarzenegger attempting to relieve three punkers of their clothes, or Reese sizing a pair of Nikes, as he evades the police in a downtown LA department store. But Kalogridis and Lussier paired these callbacks with fresh angles. In this go around, John Connor follows Reese through time, presumably to help protect his mother, until an encounter with an MRI reveals his transformation into a nanomachine hybrid, programmed by Skynet to wipe Sarah out.

Kalogridis and Lussier raise the time-travel paradox stakes with multiple, often overlapping alternative timelines. In one, a reprogrammed T-800 saves Sarah from a T-1000 (a shapeshifting Lee Byung-hun), when she was just nine year old. This “Guardian” Terminator has shadowed Sarah as her protector, ever since.

Kalogridis and Lussier sat with Creative Screenwriting to discuss time travel cause and effect, their process for resolving narrative disagreements, and their reluctance to enter the house that Cameron built.

You’ve earlier expressed hesitance to take this project on. Was that hyperbole, or did you truly say “Hell no”?

Yet I’m interviewing you right now. So what ultimately turned three “Hell no’s” into a “yes”?

Patrick: We were doing another project for (producers) David Ellison and Dana Goldberg, who approached us about this, and even though our initial answer was “no”, the “what if” conversation began and that leak started to happen.

Laeta: And then I consulted a mentor figure of mine, who felt that it was acceptable for me to do this. I needed to get the blessing of someone I deeply respected, because any assay into the Terminator universe is filled with risk, because this intellectual property was created by one of the greatest filmmakers who will ever have lived. And he’s not just a great filmmaker. He’s also a great explorer, a great advocate for the natural world and a great conservationist. I’m not exaggerating: James Cameron is a towering figure of the twentieth and twenty-first centuries.

Laeta: And he’s the person who created the Terminator universe, to whom ultimately it belongs – both because that’s what’s right, and because legally, as copyright always reverts to the original owner, this will eventually become Cameron’s again. So this is something to approach with a great deal of respect and trepidation. It’s like walking into a house someone else built, and trying to create something worthy of the structure already standing, where you want to give it value and not detract value. And both things are possible.

James Cameron and Arnold Schwarzenegger on the set of Terminator 2: Judgement Day

So Patrick, you had a slow-burning “What if?” question, and Laeta, you had spiritual support.

Laeta: (laughs) I had a spiritual crisis.

One of the most intriguing moments, was the MRI scene, when nanomachine John Connor gets caught in the magnetic field. What inspired this?

Patrick: From the very first draft, we knew we had to ask: “How do you demonstrate the weakness of this thing?” The answer: with the biggest-ass magnet you can find in a conventional setting that wouldn’t be out of place within the scene. And Laeta and I have both had MRIs – not together, of course, and we both recall the experience of being in an MRI, thinking: “Wouldn’t it be tragic if…”

Laeta: …There are incidences of shit flying around and people being killed in MRIs. In one case, a metal chair flew across the room. Another time, it was an oxygen tank. The field will literally pull these things across the room, if they’re placed too close. Of course, normally the magnet isn’t turned up anywhere near to what it can actually manage.

Patrick: But everything can go up to 11.

Laeta: So the concept was: “Where is a magnet?”

Patrick: At one point, we talked about having him climbing around a junkyard near the magnet that drops the cars into the crusher. Because you need to establish some weakness in Terminators.

Patrick: One of the first jobs I had was on MacGyver, where you learn about unique problem solving, so MacGyver helped us come up with the MRI idea.

And did you imagine bits of John Connor’s body trailing behind, as he tries to free himself from the field?

How specifically did you articulate every beat of action?

Laeta: It is completely director specific. Some directors know exactly what they want the action to look like, and they collaborate with the second unit director and the storyboard artist to come up with the visuals. Other directors are less involved in that decision-making process. So in the script, you always write your visualization of what the key beats need to be, but how they are realized, is always a director’s purview.

Patrick: We spent a lot of time talking about “Terminator” action – what’s specific to Terminators, and a lot of that was detailed out, because it’s not as simple as, “Oh, they’re in a fist fight.”

So do you get as granular as to say, “Someone throws a punch, the other person block it, grabs his arm and flips him”?

Patrick: It depends. Sometimes you write: “Titans fight”. Then other times you write, “Break stick, bang head, smash this and fold that.”

Laeta: It depends on how important the individual beat is. Do you really need to visually convey on the page what John Connor is going to look like walking away from the MRI? Yes, you do. That’s a super-important visual, because it establishes so much about how he is constructed.

Patrick: Not only how he’s constructed, but what happens to Kyle Reese’s character in the moment of seeing that. So much of that is Kyle understanding that John is not human any more. In absolute concrete terms, it’s an “Oh-my-fucking-god” moment.

During your writing process, do you two have a mechanism for mediating divergent ideas?

Patrick: There’ll be a lot of debate back and forth, because everybody gets lost in their own forest, and it’s good to have a partner who can shine a light and say, “Over here! Come back to the real world!”

You had to navigate the complexities of time travel and multiple timelines. I have a fantasy that you stood in front of a white board, mapping out different cause-and-effect flow chart scenarios.

Laeta: We actually did do that, but it wasn’t just one white board, it was five, and one of them was on wheels. They covered every wall in the office.

Patrick: It looked like the opening title sequence from Se7en.

How did you negotiate the complicated narrative paradoxes of time travel?

Patrick: You create the boundaries of your own universe…

Laeta: …and then you violate them.

Patrick: For me, it always came back to the scene of John Connor being marooned; of being an outcast. Because from your personal perspective, no matter where you go, you’re a constant in your own timeline, which is always forward. Even if you go back in time, you’re going forward. You’re aging. So as long as you stay true to that, you can get away with anything.

That was your beacon through the fog?

Laeta: For me, the beacon was always the characters, because the story always exists in service of the characters and their emotional journeys.

Patrick: And the characters do things you don’t think they’re going to do when you begin – that’s for fucking sure.

Laeta: And generally, with every movie in existence – but specifically with time travel movies, there will be plot holes, because the paradoxes are real, and there’s nothing you can do about that. So you have to pick which plot holes you can live with and decide what you think the audiences will go along with, because the characters are cool and the moment that sells the scene is cool.

Look at Terminator 2, which is as close to a perfect action movie as anyone will ever make. At the beginning, you think Robert Patrick’s character is human, so by the time you figure out he’s metal, you don’t ask yourself how something metal could be sent back in a time sphere, when it’s clearly established in canon by the same director and writer of the first movie, that if it’s dead, it won’t go. But you don’t care. You don’t give a shit. Now, if he showed up as metal, you would have cared. And T2 has a different paradox than the first movie does. Why doesn’t Sarah ever say to herself, “Wait a minute, if I change the future and prevent the apocalypse, that means the father of my child never comes back to me, and that means my child is never born?” She never has that conversation and you never think about it while you’re watching it, even though it’s a pretty straightforward time travel paradox.

Can you describe any scenes that were fleshed out, but were jettisoned or materially changed, for practical reasons?

Laeta: There was a scene we wrote when Sarah was a child, asking Guardian over and over again for a tea party. And you eventually see the tea party set up, but then we reveal that Sarah’s actually being trained to snipe – to shoot the teacups.

And given that Guardian has interacted with Sarah since she was nine years old, is his attachment to her simply the result of acquiring data over time, or is he achieving a true bond and a higher consciousness?

Laeta: It’s an arguable point. I could go both ways.

Patrick: I’d say yes to a higher consciousness. I think he is self aware, because he’s teaching Sarah and Sarah’s teaching him. And just because he isn’t human, that doesn’t mean he doesn’t love her and it doesn’t mean he wouldn’t die to protect her, and it’s not just because of his programming. This goes beyond that. And Arnold’s character – his mere existence and how he interacts, is the key hope for the future.

Laeta: But that’s from T2, when Sarah says: “Because if a machine—a Terminator – can learn the value of a human life, maybe we can too.” 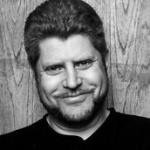