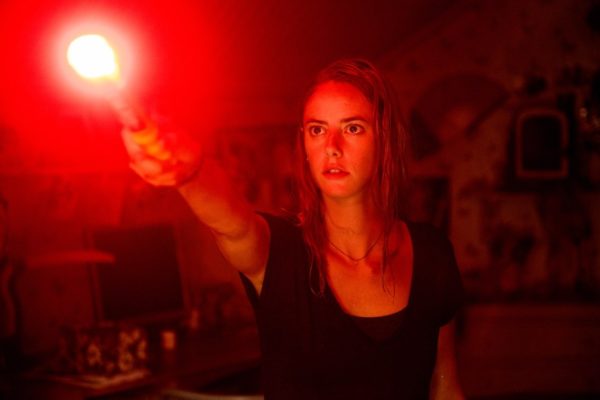 Brothers in real life as well as screenwriting partners, Michael and Shawn Rasmussen have worked with horror movie veterans like John Carpenter and Sam Raimi to elevate their work. The Brothers Rasmussen sat down with Creative Screenwriting Magazine to discuss the inspiration behind writing their lastest horror movie Crawl. Crawl is directed by Alexandre Aja (The Hills Have Eyes) and stars Kaya Scodelario (The Maze Runner) and Barry Pepper (True Grit).

“How do you take Jaws and put it in a house?” mused Michael Rasmussen. “When I first graduated from college, I moved to Florida. There was a canal behind our building and I would see alligators in there. I found it strange how we coexisted with those animals down there. There was also a hurricane that hit at the time and these elements were all new to me.” This experience from decades before shaped the initial concept. Like many films, the premise for Crawl came from a “what if?” scenario.

“We’ve got some other friends at Cape Florida who were always really cavalier about hurricanes,” added screenwriter Shawn Rasmussen. “They always said they had no plans to leave their houses, despite the storm. This was ten years ago though. It seems like storms are worse now, so people are less likely to wait them out.”

“That was where the seed for the film was planted, but three and a half years ago, we talked about a girl being stuck in a crawl space with an alligator during a hurricane and that was the simple pitch I gave to Shawn,” recalled Michael. “That’s where the idea really came to life.”

Inspired by Jaws, Hitchcock and The Shallows, Shawn said, “as screenwriters, you hear ideas that have been done before, so when Michael pitched it to me, it sort of stressed me out. We did some research to see if a film had been set in a crawlspace and it hadn’t. We knew the idea of a crawlspace was unique and it would resonate with people.”

“It was as simple as the logline,” said the writing team. A young woman, while attempting to save her father during a category 5 hurricane, finds herself trapped in a flooding house and must fight for her life against alligators.

The simplicity of the story caught the eye of Jake Wagner from Good Fear Film + Management and eventually went up the flagpole to Ghost House Pictures and Sam Raimi (The Evil Dead). “We spent six months writing the script, then we reached out for representation.”

The spec script and the killer logline got the ball rolling and after three or four revisions, the script fell on the desk of Raimi as another producer. “The original spec was very contained in one location. When Alexandre Aja got on board, it was clear he couldn’t film the script as written. He said it could be bigger.”

The original script was set mainly in the crawl space, so it was reduced to the first two Acts. Then the writers came up with an expanded Act III. “Once he said we should become bigger, it lost a little of its original qualities, so we had to dial it back and make it more grounded [for the shooting script].”

“This could have been a sci-fi movie, but we wanted it to have real characters battling a real adversary. These are real alligators. They’re not mutants, aliens or some fictional monsters. The people are working class and the girl is a grad student, so this is also a real scenario that could happen tomorrow. It’s a home invasion film, where the invaders are alligators. A story of survival.”

“I think horror works best when they feel authentic and the characters are not cardboard cut-outs. They need to explore three-dimensional characters that had something to work out in an extreme situation. Haley and Dave were trapped under the house, but also trapped together, where they were forced to solve their issues.”

“Raimi, who got Crawl set up at Paramount, focused on the character aspects of the movie. The relationship between the father-daughter had to feel authentic and be a self-contained story, even if you removed the storm and the alligators. There needed to be a family drama, mixed with the exceptional situation of survival.”

Michael and Shawn Rasmussen discovered that Director Alexandre Aja wanted to work with Sam Raimi ever since he worked with Wes Craven on The Hills Have Eyes. This was their chance to finally work together.

“This is one of the things we really worked hard on. How much time are Dave and Haley working on their relationship issues while there’s the danger of a hurricane and alligators? There were definitely scenes that ended up on the cutting room floor to make the relationship more realistic. You’re not always going into your personal history with alligators a few feet away.”

Choosing to put two people in the crawl space made the story more interesting, because they were forced to reconcile. “The father wants to talk, but the daughter simply wants to survive and end the situation. The house represents their family and because it’s being bombarded by outside forces, the father is afraid to let the house go, whereas the daughter understands family is more than a house.”

As for the cutting room floor scenes, several moments of conversation were cut out that really took a deeper (but unnecesary) dive into the father-daughter dynamic. “There were more relationship building moments under the house. One thing I remember is that we put in character moments, but Alexandre would write something like, ‘Corny,’ to guide us so we didn’t take the screenplay too far into the melodrama.”

“Before the end, Dave and Haley discuss growing apart with the wife/mom. Those moments are more like Cliff Notes versions of things that were cut. The father might have been more hopeless or even a bit of an alcoholic, so we dialed back on those things. Now, those moments are more subtle.”

“The movie starts where they’ve had a split, but through the film, they’re given more heart-to-heart moments so they can both be less stubborn. We do outline heavily, so a lot of this we had figured out before we started to write the screenplay. What’s the story really about? How will this relationship play out? We’re heavy-duty outliners and our process before writing is to outline the whole story.”

“We come up with a basic idea and we talk it through a lot. Once we had about twenty pages, we started work on the script. When we get to dialogue, there are happy accidents that come about. We’re actually a little surprised about how much of the initial dialogue stayed in, which we know is unusual.”

The screenwriters wanted to make sure the hurricane and the alligators were reasonable well portrayed. “Maybe they’re a little more aggressive or slightly bigger, but we wanted the story to be realistic. The house has sat vacant for several months, so the dad doesn’t know they’re there. The alligators are actually being territorial in their new home. When Alexandre came on board, he wanted us to add more accurate movements and responses for the alligators, in the same manner they would behave in the wild.”

“These days, we’re seeing so much about how we’re encroaching on the habitats of wild animals, so these were additional themes to consider. As for the storm, we wanted it to feel like an actual storm and the emotional impact. It was inspired by Hurricane Katrina and how helpless you are in the situation—the water is coming and you have to get above it. The hurricane also established the ticking bomb of the story. They can’t just wait for help. The water is going to rise and they have to get out before it’s too late.”

When the screenwriters collaborate, Michael focuses mainly on story and plot while Shawn focuses on character building and dialogue. “We know when to step back and let the other one do their thing. We’ve never come to blows. It helps that we’re brothers, but sometimes Shaun will urge something and I’ll resist. When we fundamentally disagree, a few nights of sleep and time usually help with clarity.”

“When you’ve had the pleasure of working with people like John Carpenter and Sam Raimi you have to leave your ego at the door. That’s the difference between getting a movie made and not getting a movie made. Others may have a better vision that we may have missed. You have to be able to take notes from collaborators to create a great script.”