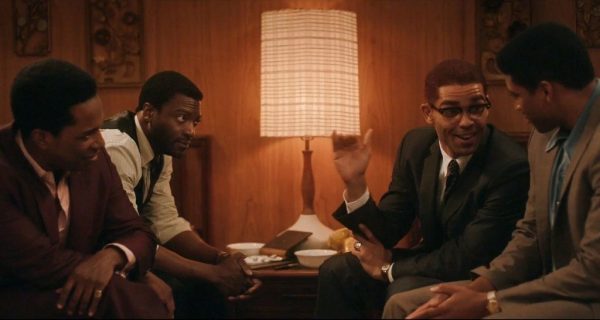 “I Don’t Want A Piece Of The Pie, I Want The Recipe” Kemp Powers Discusses ‘One Night In Miami’

The film version of One Night In Miami is built upon the lofty shoulders of a Kemp Powers’ play about four influential black men instrumental in the civil rights movement of the sixties –  Malcolm X (the activist), Cassius Clay, (the boxer who later changed his name to Muhammed Ali), James Brown (the NFL player, not the musician), and Sam Cooke (the soul singer).

The story is based on a fictitious conversation between the four men in a motel room after outsider Muhammed Ali beat champion heavyweight boxer Sonny Liston in 1964. (The actually meeting happened). This was fertile ground for them to discuss the status of Black America during a time of massive social upheaval. Fast forward to more than half a century later when Powers adapted his play for the big screen at a time of… even more massive social upheaval where Black Americans are still demanding their equal status in society.

One Night In Miami is not so much a portrayal of four angry men battling oppression, but rather, an intimate, raw, voyeuristic examination of their views on social justice and how to achieve it.

“I didn’t chose to write about them,” explained Kemp Powers. “They chose me because it was a real night.”

More importantly, “they were the four most impactful men on me as a young man.”

Putting these icons in a room after an actual boxing match piqued the writer’s curiosity and inspired him to write his play about how these spirited men, each with strong opinions, become friends.

During the research phase, Powers initially considered writing a book about them because their history was so rich. Ultimately, he decided to write a play, and later the screenplay.

Powers didn’t want to write a standard biopic about their lives. “My goal wasn’t to capture all that they were. I wanted to capture that moment in time.” From the period leading up to the fight and the moments following it. Malcolm X (Kingsley Ben-Adir) , Cassius Clay (Eli Goree) James Brown (Aldis Hodge), and Sam Cooke (Leslie Odom Jr.), “were each going through a period of real transformative change.”

Putting them together in a film with a comprehensive knowledge of their histories, Kemp Powers confidently felt he had a strong idea of how each would have felt about various issues. He didn’t imagine these characters as fictionalized versions of themselves. The notion of capturing a moment in time excited the writer because he wanted to avoid common trap of biopics by writing a “book report.” He was more interested in, “getting into the humanity of each of them during this pivotal moment in time.”

The play was set entirely in a motel room to allow the audience to focus entirely on the dialogue to tell the story with minimal visuals. Powers recaptured this elevated dialogue by setting large parts of his film in one room. He wasn’t overly concerned with the movie becoming a filmed version of his play. Powers embraced the use of limited locations to the film’s advantage. “Cinematically, some of my favorite films like Twelve Angry Men and The Big Chill take place in confined spaces. These films are entirely set in one room allowing them to focus on the characters, their development, and their interactions with each other.”

Powers was fortunate enough to have an abundance of source material to reference. Although he represented the truth as best he could, there were times he created ‘characterizations’ or ‘dramatized representations’ of the four men to enhance the story. The best example of this was the simmering feud between Sam Cooke and Malcolm X which didn’t actually happen. However, Powers chose to write it to explore their opposing views on tackling social justice.

A private setting allowed Malcom X, James Brown, Cassius Clay, and Sam Cooke to express their most private thoughts in a public way. “They’re such public figures, so showing them in private excited me,” exclaimed Powers. “You want to give the audience a chance to feel like they’re a fly on the wall and listening to conversations they wouldn’t normally be privy to.” Despite the personal nature of the conversations, the celebrities discussed common social issues within the black community.

Kemp Powers used the brutal honesty of confinement to explore both external activism and internal reflection. “It’s a verbal boxing match.” Not only did Kemp explore the shifting group and power dynamics between the men, but also the dynamics between them when they were paired off. “When all four of them were together, it was harder to get to the root of key issues.” When they split off into pairs, they discuss different issues or the same issues with different perspectives. “The way Malcolm interacts with Sam is so different to the way Sam interacts with Cassius.”

“Each of these pairings gives me an opportunity to explore a different side to each of them both emotionally and intellectually.“

Tackling a topic of the magnitude of civil rights leads to the possibility of broadening the scope of One Night In Miami too far. Powers touches on a range of issues to improve the lives of Black Americans such as the need for financial and political power.

“I’m a big believer in an African American world view. Black people who grew up in a Western society have a certain shared experience. The notion of race and ethnicity is something that black people are made aware of at an early age. They are asked why they can’t be an American like everyone else? Why do they have to focus on race so much? The powers that be ensure that these questions are at the forefront of their consciousness either through overt means like red-lining and voter suppression, or subtly, like white people clutching their purses when a black person enters a store.”

We may have made some progress addressing these engrained issues, but there’s a long way to go.

“It’s a conflicted way of living because your “American-ness” is always called into question despite most of America’s population being derived from immigrants.” Black America experiences a contradictory version of equality that is a far cry from that promised in our constitution. We all have different visions of what equality in America looks like. “Sometimes groups of people who want the same thing [equality] end up fighting with each other rather than fighting against the forces that are blocking that change.” That is the core of Sam Cooke’s and Malcolm X’s conflict.

This disagreement was the crux of the friendships explored in One Night In Miami. “We can all want the same thing, vehemently disagree, but still stay on the same side,” stated the screenwriter.

Powers examined the conflicting values of Sam and Malcolm who appeared to argue the most in the film. “They represent two very different ways of moving ahead.” Malcolm was a revolutionary who was intent on burning down the house, while Sam believed change could be affected by outsmarting and gaming the system from within. Sam Cooke perfectly captured this sentiment when he said, “I don’t want a piece of the pie, I want the recipe.” Cooke always sought to empower the black community throughout his music career.

The screenwriter skillfully pitted these diametrically opposing philosophies against each other. However, he declined to pass judgment on which was most effective. “The truth is, success is situational. You need both approaches at different points.” Powers reiterated that he isn’t aware of an actual shouting match between Sam and Malcolm in real life. “It’s a projection of the internal monologue I’ve had in my mind over my entire career.”

The writer compares the tone of his play to his screenplay. “The plays is a tragedy and ends on a more downbeat note. Despite Malcolm X’s house being firebombed at the end of film, I think it ends on a note of incredible hope.” The civil rights movement is more a series of events than having a finite beginning and an end.

Malcolm X was acutely aware of the mortal danger his ideas placed him in. “Malcolm knew there was someone to carry the torch after he had gone.” He inherently knew his autobiography would outlive him. “You can kill the men, but not their ideas. I want audiences to have this conversation,” Powers concluded.