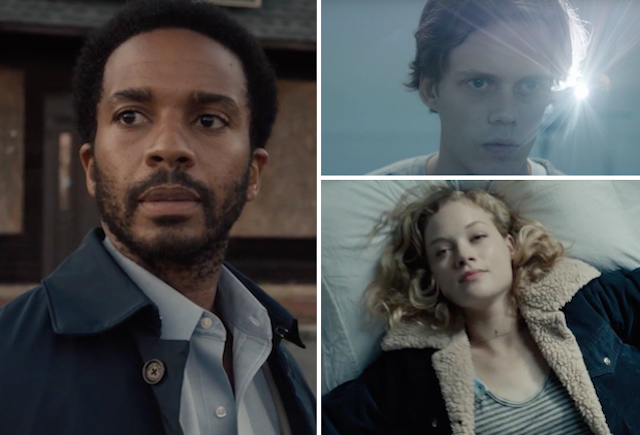 Marc Bernardin has enjoyed a varied career as a journalist on plum gigs at The Hollywood Reporter & Entertainment Weekly. To top off his accolades, he’s also a comic book writer and a podcaster (Fatman on Batman hosted with Kevin Smith.) He always wanted to segue into TV writing. This goal eluded him for many years until he landed a staff writing spot on Alphas on SyFy. This led him to write on Castle Rock, based on the stories of Stephen King and produced by J.J. Abrams’ Bad Robot. He sat down with Creative Screenwriting Magazine to discuss his writing career starting with Castle Rock, the Hulu hit.

“We wanted to synthesize the things we love about Stephen King’s storytelling with the things we love about the J.J. Abrams’ wheelhouse style of storytelling. They are two fundamentally different things. J.J. Abrams is about the mystery box… the pleasurable tension of not knowing what is coming… looking at something and not understanding all of it.”

“Stephen King is about telling you exactly what’s going on after dropping into the lives of people that you have come to know and understand. You see how that supernaturally pans out and destroys their lives. Finding the happy medium between those two storytelling modes added its own kind of tension because we think we know what this story is, but we’re not sure. We only see how it’s affecting people.”

Bernardin was asked how his writing path led him to the offices of Bad Robot. “Life’s happenstance and happy revolutions.” Actually, there’s more to the story than that.

“When I was a journalist at Entertainment Weekly, I had an assistant named Scott Brown who was an aspiring film writer. I was an aspiring TV writer. We became each other’s first readers. Scott became a TV writer and staffed on a TV show called Manhattan on WGN. He knew about Castle Rock before it was public and he called me requesting my latest TV writing sample. Since he already knew what my writing was like, he told Bad Robot that ‘they need me.’ A few months later, I got a call asking if I can meet at Bad Robot the following Friday.”

The fated spec TV pilot that Bernardin wrote was an alternate history TV show set in an African-American community amid slavery. This spec pilot spoke to what this place might look like in both macro and micro examinations. It explored politics, family, genre and action that lent itself to Castle Rock. Bernardin sought to build a world that made sense.

Bernardin checked his calendar and cleared the whole day. He took his meeting at Bad Robot without receiving any further details of the show. “We talked about what makes a TV show good when it works and what makes it fail when it’s bad… the pitfalls and joys of creating and working inside a shared universe.”

Interestingly, he wasn’t asked to pitch his take on what the TV series might be or story ideas. “They don’t want you to pitch an episode [as is the case in TV procedurals]. They want you to respond to character. ‘Which characters do you think you can drive the story towards? What are your life experiences that connect in some way to what Castle Rock is or could be?”

Bernardin mulled over his response. “There was a town in New Jersey that had the highest per capita loss during 9/11. More people felt the loss of people they won’t see anymore. We’re talking about a town like Castle Rock which lives in the shadow of repeated unspeakable horror. What does it feel like to be haunted by giant events that you have no control over?”

The TV writer also recalls visiting a predominantly white town in Maine as a black person. “I didn’t necessarily feel that harm was going to come to me, but there were eyes on me everywhere I went. Some of these eyes were out of curiosity. Others felt more sinister.” These events filtered through to Henry Deaver’s (André Holland) life in Castle Rock.

About a month and a half later, Bernardin received his offer join the writing staff of Castle Rock. [Pause for applause.]

Marc Bernardin’s episode titled Filter garnered him a WGA Award for Long Form writing. Although Marc was credited for the episode, he confessed “it was a product of the TV writers’ room.” It was a pivotal episode in the series in which Henry’s son visits from Boston and causes unrest. “The show began to reveal itself. You could live in three or four episodes of wonderful ambiguity and swim in the mood and tone. By the end of the season, you need to be the TV show you’re going to be. Filter was the beginning of that journey when we started to answer some of the questions and explain some of the mechanics. There was always a decent amount of pressure on that episode.”

During pre-production, there were seven or eight people on staff. “In the beginning, it’s always a conversation and questions. Where are we looking for Henry Deaver to go? What are looking for this particular episode to tell us about our character.”

“The early conversations are what is the show about, what does it feel like, what do we want to say about our main character? Then it becomes what does the season want to say, what’s the story for the season, how do we break the story into ten discrete chunks?”

Henry has his own internal monologue. “I’m hearing more than I should. What does this mean?” It was a difficult episode to break. It took about three weeks to outline.

With regard to the other episodes, every writer had to pitch in story ideas and help polish each draft to make sure “the script felt right.”

Bernardin mused about his life that set the contours of his writing voice. “Every experience will help create the person you’re going to be. Constructive criticism helps me quite a bit by having to convey opinions and content in a defined space. Dealing with brevity was crucial for me in figuring out the sort of TV writer I was going to be. I had to earn the next page turn. I made every page count to propel the story… And I’m a nerd. I was always going to be a nerd. I will never not be a nerd,” he exclaimed with pride.

“I had to find ways to meld the pulp aesthetic of combustible story with my love for time travel, car chases, robots, and explosions.”

The TV writer considers what stimulates his creativity. “A lot of it is time. Original stories demand it. I give good stories time to marinate so they become the best versions of themselves. It’s like wine. The downside is that television did to cinema what magazines did to the literature [by compressing time]. Time occasionally is not your friend.”

In terms of having a screenwriting brand, Bernardin defines his as “elevated genre. I write the stuff that I love with discipline. I take things like superheroes, horror movies, spy stuff,  supernatural, magic and fantasy and try to infuse it with a sense of gravity.”

Good stories are made great through character. “The reason we keep tuning into a TV show is not that it’s an idea we’ve never heard before or the plot. It’s the characters. These are people they can fall in love with, or at least understand them in an implicit way. Audiences either want to get closer to them or avoid them. Television is about characters you can’t take your eyes away from,” declared Bernardin.

State Of The Industry

Marc considers there are further changes in the film and television industries. “We are at the precipice of moving to a new status quo. Writers will always hire other writers. We’ll get to a point where showrunners will say ‘I just need to run my shows without being the Human Resources department. There is so much television at the moment. There are currently five hundred scripted shows on air accompanied by the proliferation of bespoke studio streaming services. This will change the way studios acquire material. At some point, there will be a conflation of this boom time. I’m not sure there are enough eyeballs to make all this television possible in a sustainable way. The era of peak TV will come to an end. Who knows what the era of post-peak TV will look like in terms of budgets or content?”

Bernardin offers his thoughts on where newer film and TV writers might look for entry points into the industry. It’s still hard for original voices to find a place given that our screens are still dominated by IP – comic book, novel, sequel, reboot, prequel or spinoff. These opportunities are unlikely to be assigned to new screenwriters.

However, our industry is always looking for new voices. Emerging screenwriters should consider directing their own scripts. Produce a trailer for your own film or TV show. This could open doors for you even if you don’t have access to the best equipment. “Do not just be a screenwriter. Keep making stuff,” advises Bernardin.

The TV writer philosophizes about what it takes to become a successful screenwriter. He quotes William Shakespeare. “To thine own self be true.”

“It wasn’t until I recognized the totality of who I am that my writing took off. Until I began to incorporate the fact that I’m African-American, that I’m somewhat older than the average screenwriting graduate, and that I’m a parent with a child with special needs. All those things that I am had to be reflected in my work. The more I did this, the more my work got better exponentially.”

“The more of myself I put into it, the more success I found with it. Finally, find out who you want to be and ensure that view is reflected in your writing. If your work doesn’t gel with your specific uniqueness, you’re just like everybody else. And there’s already everybody else.“