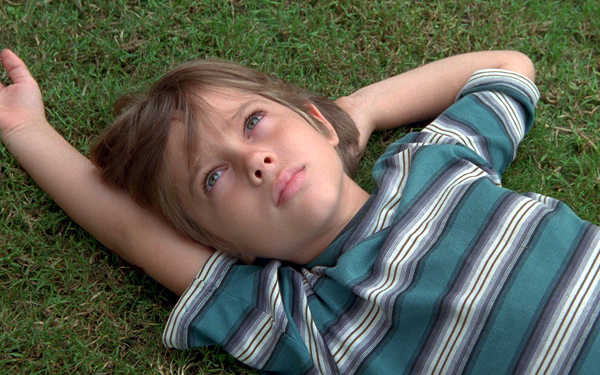 As both a writer and a director, Richard Linklater has undertaken storytelling challenges his entire career. Whether it is the “day in the life” narratives of ordinary people in Slacker or Dazed and Confused, presenting a film in real-time in Tape, weaving real interviews within the narrative of Bernie, or viewing a couple three times over the course of their eighteen year relationship in Before Sunrise, Before Sunset, and Before Midnight, Linklater has developed into something of a master of unconventional storytelling.

On one hand, Boyhood is just another challenge in a filmmaking career full of extraordinary films, yet on the other Boyhood is one of the most exceptional accomplishments in modern cinema storytelling. Linklater shot Boyhood over the course of twelve years, capturing star Ellar Coltrane as he aged from six to eighteen. By filming sequences roughly a year apart for twelve years, Linklater was able to develop the story for Boyhood over a decade of time while intermittently shooting and editing the film, a luxury few filmmakers have had.

Creative Screenwriting spoke to Linklater shortly after Boyhood was selected as the best picture of 2014 by the New York Film Critics Circle, an honor matched by the Boston Society of Film Critics and the Los Angeles Film Critics Association soon afterward.

Lorelei Linklater as Samantha and Ethan Hawke in Boyhood

When you started the first day of shooting Boyhood back in 2002, what did you actually have in terms of the script?

On that day I had the script for that year, and kind of broad outlines for all twelve years. I had the geography of the piece, and I knew it would be very process-orientated because I was allowed this roughly one year period in between where I could concentrate on the next year. It’s such a unique process because as a writer you’re not really given that chance because you just write a script. But in this case I got to write a part of a script, shoot it, edit it, and have that inform the continual writing process. That was an incredible gift and opportunity that the time allowed. I think there was a random element to it that had its own timeline and preparation. It’s rare that you get to cast somebody and say, “Hey, you’re going to play this and come back in a few years.” For example, with Charlie Sexton’s character, who is Mason Sr.’s roommate, I said to him, “We’ll use you again in six years.” [Laughs] Even the guy who is working on the septic line that comes back as the Assistant Manager of the restaurant, I had to say, “In four years from now, we’re going to need you back.” They’re just kind of like, “That’s so crazy, but yeah!”

There are many aspects of your life and the primary casts’ lives that are reflected in the narrative of the film. As a filmmaker, what do you see are the benefits of working so closely with your actors on developing a film’s story?

I don’t really think the story was developed via the actors. Each year in essence takes in the little bits, but the bigger story kind of pre-existed. People think I asked Ellar, “What did you do in school the other day? Let’s make a scene about that!” That never happened. The time we spent together was me just gauging where he was at in his life – what his concerns were and what he was doing. Then I would think, maybe we could move the camping trip up, and we can do this or that. As he got older, I would say, “Next year you meet a girl and you’re going to have a teenage talk. I want to make a good scene that’s believable with what you would talk about.” I was asking him to collaborate on that scene. It was fun to see him become more and more a participant in his own character. I like to do that with actors, to have them own their characters if nothing else. Ellar’s life was pretty unusual – he didn’t have the traditional schooling – but obviously mentally and emotionally as he got older we started talking more. There was plenty of reflection that was close to him.

That ties in to what is probably the biggest misconception about your films, especially in the case of the Before movies and Boyhood, where people think the dialogue is improvised which isn’t the case.

On one hand, for all the time I spend writing it’s kind of an insult, but on the other hand it’s the ultimate compliment. The screenwriter in me is insulted, but the director in me is complimented because I want it to feel real. The only way I know how to do that is to actually have it be very tight and rehearsed for it to feel loose. The actors have to know it and feel it so well, so that’s more of the filmmaking process that brings that out. It does start with words on page, believe it or not.

I wouldn’t know how to improvise. I don’t know anyone who does a movie that way. I don’t know how it would work. I think you can maybe do it in an emotional scene, like when people or fighting or something, depending on the film.

Natural Dialogue: Julie Delpy as Celine and Ethan Hawke as Jesse in Before Sunset

Because of the way the film was created it is very episodic, which is a structure that tends to be more of a natural fit for television than for film. Were you ever concerned about pacing issues, whether it be during scripting or filming?

No, not really. When I first had the idea I could see the finished film and feel it. It was just like in one sitting all these years would go by and everyone would grow up and the adults would age. It was just one piece to me. I think the tone and the pace of that was kind of inherent in the overall story. I never really worried about it. Actually, Boyhood is sort of an epic on one hand because it covers a lot of ground, a lot of years, and has a lot of scenes and movement, but on the other hand it’s pretty intimate. It has the pace of what I wanted to feel like real life. You can look at it any number of ways, as a lot of drama with a lot going on or not much going on depending on how you feel about that.

Because you had so much time to think about the next year’s sequence when you were in production was there ever a worry that you might over-think a sequence?

I think the whole thing was overthought. All I had was time to think about everything. I had a year to think about the next year, so I had a good way of putting it on the backburner for a while and coming at it fresh. I didn’t really question it. Some of it was very personal and came from my own life and images from my own memory. I trusted it. I said, “Well, if it means something to me all these years later, I think it would mean something to someone else.” That was my ruling principle.

You’re a filmmaker who is known for taking on challenges in terms of narratives, whether it’s something like Boyhood, using real-life interviews in Bernie, or using a large ensemble in Dazed and Confused. How do you confront these narrative challenges as you write, especially if they ever begin to feel like they’re too daunting?

I would think every film ever made or any script every written you feel like you’re challenged. I don’t know anyone who’s like, “Oh, this is easy.” I mean, what are you doing if you’re not trying to break new ground? I think the challenge is just inherent in the form itself. It’s always going to be tough. I think you just get obsessed with a story you’re compelled to tell and then that’s the fun part. Then the challenges present themselves. It’s usually in how to tell it. There are a lot of stories that seem to have limitations that make it impossible to pull off, but that’s you challenging yourself as a storyteller to do something you haven’t done before. I want to tell a story in a new way.

I think I have spent much of my life thinking there were new ways to tell stories or that cinema had this endless ability to perceive of things differently from other mediums that I hadn’t necessarily seen yet. There are so many stories in the world, but how to tell a story is the fun, challenging area. Sometimes a more traditional approach is the best way to tell a story, and I’ve made movies that are pretty straightforward and clean in their storytelling, so I revel in that and take on other challenges with the film that are more daunting, like making a period film. Every film feels like it has its cross to bear and has something that is going to make it very difficult.

Although Boyhood doesn’t, many of your films take place over the course of a single day or even just a few hours. What draws you to writing films that take place over such short time periods?

They don’t all do that, but I do have a lot of films that take place in fairly short amounts of time. I think that there’s something sort of primordial in that. Ancient Greek theater is based on the notion that most stories only lasted about twenty-four hours because they thought it wouldn’t be believable. I think I always approached film from more of a structural point of view of storytelling. I’m always finding a form, and often that form has a lot to do with the time element of the story versus the plot. There’s a time element to all of our lives just inherently and the way we process every day, so I think in a lot of my storytelling methodologies time has largely replaced the notions of what a plot is, which to me feels kind of constructed. Not that life doesn’t occasionally offer up a plot twist, but it’s always offering you time linearity. It is kind of funny that the guy who makes films in real time, which I’ve done a few times now and is a challenge, makes this time epic. I think it evens out my ratio. I think I’m back within the statistical norm! [Laughs] When you spent 4200 days in production on one film, it really changes your averages.

You’ve said in the past that your next film, That’s What I’m Talking About, is a “spiritual sequel” to Dazed and Confused. Do you realize that because so many people love that movie that you’re playing with fire?

Well, I think the word “spiritual” gets me off the hook. I just shot it and wrapped it recently, and it has nothing to do with Dazed and Confused other than it would be set four years later, when one of the younger characters went off to college. It’s a party film. It’s really about the beginning of school, not the end of the school year. I guess personally or autobiographically it’s kind of in that realm, but it’s also a continuation of Boyhood, believe it or not. I don’t know if one film can be a sequel to two different movies, but it begins right where Boyhood ends with a guy showing up at college and meeting his new roommates and a girl. It overlaps with the end of Boyhood.