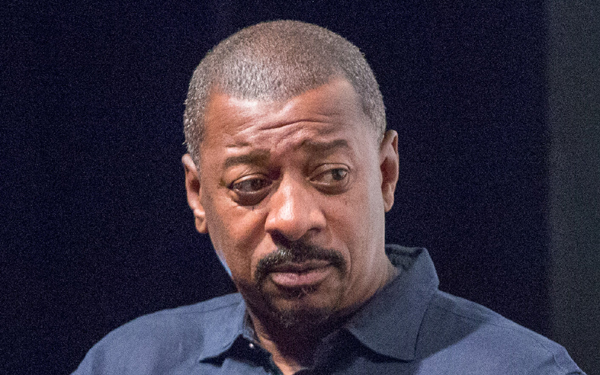 “If it came easy, everyone would do it.” Robert Townsend on writing.

The only thing I’ve ever wanted as an artist was to say that I never repeated myself. As an artist, I just want to do more.

Sitting in a borrowed office at the 2015 RiverRun International Film Festival in Winston-Salem, Carolina, surrounded by Indie film posters, and with the perpetual aroma of popcorn in the air, Robert Townsend fills the room with the unmistakable charisma of someone who has lived a life of film. It’s difficult to pin him down as an actor, comedian, writer, director, producer or even program director, as – to mix a metaphor or two – his various hats have consistently overlapped one another over the past few decades. Perhaps best known for his involvement with Hollywood Shuffle, Eddie Murphy Raw, and The Meteor Man, one thing is for certain: he loves the many aspects of the business.

One of the upcoming panelists at the festival, Townsend brings with him a lifetime of experience, including personal encounters in a pre-Civil Rights America, particularly relevant since this year’s theme is “Spotlight on Black American Cinema (1971 – 1991)”. The festival also brings Townsend’s 1987 film, Hollywood Shuffle, to a live audience for the first time since it’s initial release.

Creative Screenwriting was lucky to grab a conversation with Townsend in his office.

“I listen to Jazz, but it has to be jazz with no words to it,” he begins, as he starts to talk of his writing techniques. “I have to have a full breakfast…coffee. I can’t talk to anybody. I can’t watch television or read the news. It will get into my spirit. I can’t let it affect my writing.”

Describing his “creative bubble,” Townsend talks of how he shuts off the world to dive into his own ideas. Generally working mornings, he will write for several hours each day, spending an equal amount of time conducting research, either specifically for the film at hand or while reading other scripts of similar genres. “It’s just me in a room, discovering characters and uncovering story. For me, whatever I create, I want to enjoy. When I hear an executive say of an audience, they’re going to like it. I’m thinking, do you not like movies?”

Townsend draws strength from the struggles he has undergone, both in a pre-Civil Movement America, and throughout his multiple careers. He jokes about a line in Hollywood Shuffle where a black actor acknowledges he is only allowed to play slaves or butlers, noting the 2013 films The Butler, and the award-winning 12 Years a Slave. “Quality will always win,” he adds.

Taught to always be open to his inspiration, Townsend’s story ideas come from anywhere and everywhere. “I’m open to my surroundings. I’ve gotten ideas from watching my children or taking a drive in the car—listening to the radio or reading the newspaper. Ideas come from any place, but they must speak to me on a different level to be of value. As an actor who transitioned into a writer, I’m all about instincts, trusting my instincts. I know when it’s authentic and when it’s not. What we’re taught in acting is how to explore the moment and find out what the character wants. The same tool applies as a writer. If you can apply the same thinking as a writer, you can succeed.”

Chiwetel Ejiofor as Solomon Northup in 12 Years a Slave

The Second City is a comedy and improvisation conservatory that began in 1959. Since it’s creation, greats such as Alan Arkin, Joan Rivers, Harold Ramis, John Belushi, Bill Murray, Dan Aykroyd, Gilda Radner, Tim Meadows, Mike Myers, Chris Farley, and Stephen Colbert, to name a few, have passed through their doors.

As he talks, Townsend employs office equipment the way Jackie Chan scouts a fight scene, using anything and everything to illustrate his point, a habit perhaps derived from his experience in improvisation, a craft he learned at Chicago’s The Second City.

“What I learned at Improv is the illusion. If you have the ability to improvise, writing a scene can be easy. Actors who write should learn this gift, because it helps you improve as a writer.”

“I don’t look at anything as difficult,” Townsend says of the writing process. “Every obstacle is part of the creative journey.” For example, when writing The Five Heartbeats, he and co-writer Keenan Ivory Wayans were discussing how to write a scene where two brothers are making up after a decade of silence without seeming hokey. “Some kids playing outside sparked that moment,” Townsend recalls.

The Cast of The Five Heartbeats

One of the difficulties of screenwriting – or indeed, any writing – is conveying emotions and feelings of characters who cannot themselves express them. But there are always solutions to be found. Recalling a scene from Five Heartbeats, for example, Townsend describes how they had one brother name his child after the other, thereby expressing his love without having speak the words. “I think as artists, we have challenges,” he explains, “but that’s part of the creative process. If it came easy, everyone would do it. Those unique devices in story are what makes a great movie. When I write, I see everything as a movie.”

“Explore what the character wants and apply that thinking to the writing,” Townsend advises. “If you can improvise the scene, it’s easy to write.”

Townsend focuses on the various vantage points of each character. Allowing life to happen within the story, he uses a single incident to determine how each character will react. “I try to get inside of everyone’s mind. I do a pass on the script where I monitor everyone’s emotional track.”

The Importance of Story

“A great story—you can never get ahead of it. It takes you on a journey that you didn’t expect. It’s a roller coaster ride. You can’t breathe. Surprises and curve balls so that you never know where it’s going to take you. For me, I love it. I love creating. I still have stories I want to tell.”

Be Hard on your Material

“People aren’t being hard enough on their first draft,” Townsend reflects. “They need to think through everything—all the details. Is the dialogue special? Is it original? Think about character description, wardrobe design, how the scene is set up. Everything. It’s great when a director takes it to the next level, but it starts with the word.”

Townsend always tries to create a real and believable world; one that exists within structured layers of lean content. “Everything matters,” he explains. “If this is on the wall behind me [referring to a movie poster], then it’s going to mean something in my life. It’s not heavy handed—it’s lean. No fat and great rhythm. I’ll see the extras. I’ll see the colors. I’ll hear the music. It starts to flow. There is a time when you know that it’s done. This script is ready. You’ll fight with it and fight with it and then there’s a certain point when you say, it’s ready. I can show my baby to the world.”