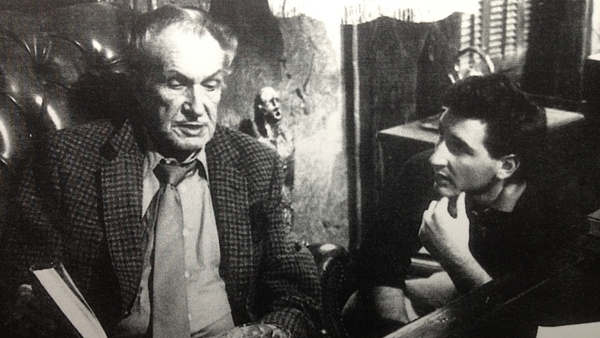 If You Really Want to Say Something, Make a Horror Film

The era of the message movie is largely over. Sure, you’ll still find activist documentaries everywhere (with a film for every possible side of the argument, each one swearing to be just as factual and reliable as the others), but narrative film written to discuss a serious topic with a broad audience is quickly becoming a memory of another era. With an explosion of venues for content distribution and the creation of niche programming that keeps audiences from ever having to watch something they don’t agree with or believe, it’s hard to find a place where filmmakers can discuss an important or controversial topic without being deemed propagandists.

One of the only places left to do that, oddly enough, is in the horror genre. During the production of our most recent book, The Anatomy of Fear: Conversations with Cult Horror and Science-Fiction Filmmakers, several seemingly unrelated conversations all seemed to converge on a few key elements about horror films that make them one of the few places in modern filmmaking where it’s still okay to have something to say.

Classic The Twilight Zone episode, “The Monsters are Due on Maple Street”

Allegory has always been a strong part of filmmaking; early filmmakers who were working under the Hayes Code had to find interesting and creative ways to discuss sex, drugs, politics, and religion, and they did it by masking the conversation. Six-String Samurai writer/director Lance Mungia touched on one of the most well-known and successful creators to do so, discussing The Twilight Zone writer Rod Serling’s work on the television episode “The Monsters are Due on Maple Street”: “Had Rod Serling decided to make a straightforward drama about communism or being blacklisted in Hollywood, which is the underlying theme, no one would have paid attention. But by taking the sci-fi genre and putting the social commentary into it, he was able to reach Mom and Pop sitting at home, who would never think about such socially relevant concepts, and subliminally touch them.”

Since the ratings system changed, however, and modern times have allowed for more permissive content, the need for allegory in mainstream genres like comedy and drama has dissipated. When a drama wants to say something, it simply says it, and audiences often don’t care to hear about it. In horror, however, the tendency towards allegory never disappeared, because it is a foundational part of the genre itself, as explained by The Last Winter writer/director Larry Fessenden: “The cool thing about horror is that you’re working with metaphor almost by definition, if you have ghosts or demons or giant creatures. And if you’re dealing with metaphor, you’re dealing with meaning, and then you’re asking what it’s all about.” The sentiment is echoed by special effects technician and co-founder of Amalgamated Dynamics Alec Gillis, who explains the attraction of horror icons and monsters: “If you’re Catholic, you pray to a statue of a saint, which helps you focus on the concept of something greater and unimaginable. That’s what these iconic creatures do… when you see saints all lined up, it does give you the feeling of the pantheon—either the Greek pantheon of gods or the new modern pop cultural gods. It’s like a church with Frankenstein and Creature from the Black Lagoon and The Terminator embedded in the walls.” Audiences who are willing to accept outlandish creatures and locations and concepts are often more susceptible to the messages that accompany them.

Element #2: They can be more emotionally honest because they are less factually accurate.

It might sound strange to credit a film for not portraying an event, theme, or belief with complete factual accuracy, but the truth is that film is a subjective and emotional experience, and as such, emotional honesty often stands in contrast to factual accuracy. When Cold in July writer/director Jim Mickle and his co-writer Nick Damici had wanted to discuss feelings about New York in the aftermath of 9-11, they didn’t set out to make a drama about domestic terrorism; they made Mulberry Street, a horror film about a disease that turned the tenants of a run-down building in New York into mindless rodent creatures. The plot of the film, about disparate people working together in a crisis, was influenced by Mickle’s observations about 9-11: “The events on 9-11 played a big part in the element of people coming together in the story. The big takeaway from 9-11 was how New York can be such an isolating and abrasive environment, but that day was the exact opposite. I remember walking across the Brooklyn Bridge that morning; I worked a couple blocks away from the towers, and when they fell everyone just started walking from where they were working. A sea of people moved across the Brooklyn Bridge, and people waited for us on the other side with bottled water and towels, volunteering to help. Those two days didn’t last long, but during that time people smiled at each other and looked you in the eye. There was a sense that we had experienced something together, which was different than the way that it’s often expressed in movies. They’re always trying to find the drama and conflict, but to me the most memorable thing about it was the connection.”

No one would argue that Mickle’s observations about 9-11 are wrong, because the film is not actually about 9-11; nor was the alien abduction film Altered actually about the psychology of molestation, according to director Eduardo Sanchez, who followed up The Blair Witch Project with this film co-scripted by Jamie Nash: “Jamie and I looked into the psychology of molestation, and we made it heavy enough, but not too heavy, because I wanted it to be fun in certain ways… Sometimes the horror genre gives you a chance to do things you can’t do elsewhere without being labeled a certain kind of filmmaker. So where we took it, we were making a movie about a serious topic, but disguising it as an alien movie.”

Spoorloos, or The Vanishing

Element #3: They ask an audience to do the difficult parts themselves.

Horror films are notorious for their ambiguity of character, their unsatisfying endings, and their desire to make audiences connect many of the dots themselves. In a way, the difficulties of the horror film are the antidote to the mainstream movie, in that they don’t want to hand you a nicely wrapped package of thoroughly explained material. George Sluizer, the brilliant filmmaker behind the French-language thriller Spoorloos (known as The Vanishing here in the US) who just passed away on September 20th of 2014, spoke eloquently on the goal of ambiguity in film: “I try to leave a lot of space for the audience to find their own answers. I have a tendency when making films to give people enough information to follow a story, but they have to fill it in themselves. And each viewer sees the film with different eyes depending on their own experience. People relate it to something in their own lives. Instead of imposing on the audience, I let them think for themselves and wonder about certain things they see, and fill in what isn’t said or shown.”

That’s the ultimate goal of a message movie: not to make someone change, but to make them consider. A message doesn’t always have to end in a period; sometimes it ends with a question mark. The filmmakers who work in horror don’t always claim to have the answer, but they are interested in making sure that people are considering the question. Logan’s Run author William F. Nolan discussed the creation of the book and screenplay in reference to the massive changes happening in the world around him and his co-writer George Clayton Johnson at the time: “During the week we were writing in Malibu, they had the Watts riots, where young people stormed through LA and took over stores and burned down buildings. The youth revolt was very much on our minds as we wrote, and so was population control. They kept warning the public about having too many people on the planet and not enough resources to support them all.” And when The Burrowers director J.T. Petty wanted to discuss the manipulative power of strong images over message content, he didn’t make a polemic against television news; he created a fake documentary about fringe horror filmmakers: “My ending voice-over basically says I went looking for something truly horrible, couldn’t find it, and so I made it up. But that’s playing over footage of a woman being stalked and killed, so it’s almost like a magic trick where your brain is so fixated on the woman being killed that you just don’t hear what’s being said. That actually made me think more about news and how violent news has gotten. I’m the last person in the world who argues for censorship, but whatever they’re saying about the facts while they’re showing you dead bodies floating in Louisiana, or Saddam Hussein’s hanging body, is just lost. Spoken words become noise when the images are that strong.”

No filmmaker is going to change the world with a single film anymore; the industry is driven by profit and innovation rather than sincerity and conscience, and audiences want to be entertained more than challenged. There are those film artists, however, that are still more interested in speaking about their passions and beliefs than they are in getting large audiences and mainstream success. For the writers whose instinct is to have a message that is as important as its plot, there is still a place that caters to them. Leatherface: The Texas Chainsaw Massacre 3 director Jeff Burr said it best: “That’s the real lesson, just keep hammering away, trying to get your vision. But that also means you need to have vision. Don’t let making the movie be more important than what the movie is about.”

Director J.T. Petty on the set of Hellbenders

For more information or to purchase The Anatomy of Fear: Conversations with Cult Horror and Science-Fiction Filmmakers, please visit www.theanatomyoffear.com.

Chris Vander Kaay and Kathleen Fernandez-Vander Kaay are a husband and wife writing team who agree on almost everything except whether or not 28 Days Later should be considered a zombie movie.  They've written television pilots and award-winning short films, and their first feature film premiered on cable television in 2014.  You can follow them at their blog, inthemargin.net.