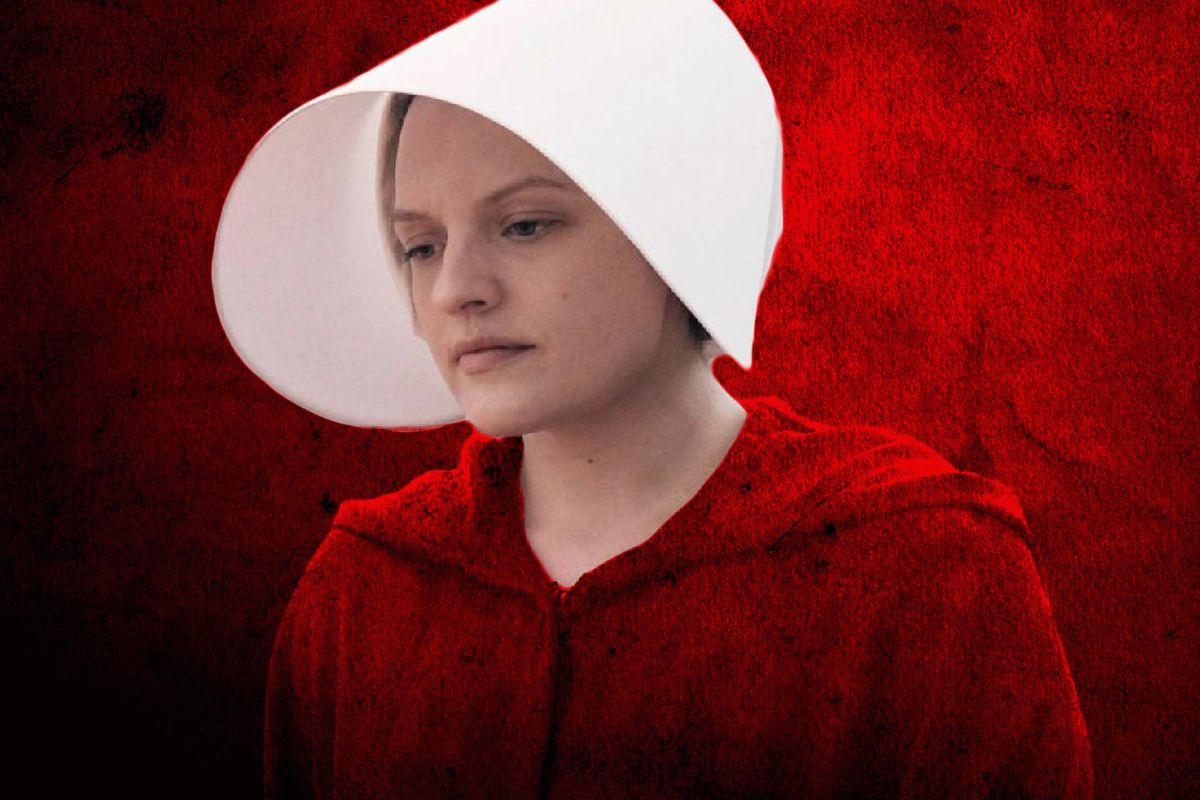 The Handmaid’s Tale, the flagship TV show on Hulu, is currently in its fourth season. Adapted from Margaret Atwood’s riveting novel which formed the basis of the first season, showrunner Bruce Miller describes the TV series as being equally shocking and hopeful in tone. Yes, this gloomy, dystopian tale always contains a glimmer of hope for Offred/June. Bruce Miller began his writing career on NBC’s long-running hit ER and has been a writer/producer on Syfy’s Eureka and Alphas, and The CW’s The 100.

Margaret Atwood coined the term “speculative fiction” for The Handmaid’s Tale after she wrote her novel in response to America’s evangelical conservative right during the Reagan administration. The term “speculative” suggests a possible society, whereas “dystopian” indicates we are already living in an authoritarian world. For Bruce Miller, debating the relative merits of these two descriptors is semantics, so he dismissed both of them. “It takes place in a different now. It’s not the future – neither dystopian or utopian. Just different,” he posited.

A Show For All Seasons

Long-running TV shows require entire seasons to be planned at the start of the season development process. The writers attend a treat before the TV writers’ room formally convenes. “At the beginning of each season, we talk about where everybody was at the end of the previous season. Who they are and what their experiences were?” Miller explained. “You need to pick a starting point that has a good ending point.”

Once these discussions start rolling, “You start to get a feeling for where these characters might want to go next,” allowing the season to organically play out.

We discuss general character arcs that come in a piecemeal fashion during these early conversations. “This is the first sweep before we start talking about plot.” When they reach the half-way mark, the TV writers stop and re-assess the plot and the character arcs in relation to how they initially envisaged the season. At that point, they plan the final episodes, and possibly, a guess at the first three or four episodes of the season after that. Miller claims to generate story ideas from other ideas in the room so his mind is always fertile.

The TV writers’ room rigorously works through this process from character to character. Ultimately, all roads lead back to June Osborne (Elisabeth Moss) since she is the main character of the TV series.

The writers ask themselves, “What would really happen to June? Not what would happen to June on TV or some fictionalized version of her. But to her as a person.”

The showrunner elaborated how he makes his TV writers’ room more efficient. “I make sure I’m not running the writers’ room all the time. Sometimes I want different flavors, opinions, and tastes. We have a very honest writers’ room where people can talk freely about highly personal things.”

The room is a sacred space where TV writers can reveal anything and everything about themselves.

“The key to a successful room for me is professional curiosity. Be fascinated by people. If someone shares a personal story, they need to allow other writers to ask questions about that experience. That’s where our show’s stories come from. Start digging around and get as specific as you can.”

Bruce Miller is cognizant of the perils of over-planning The Handmaid’s Tale. “I don’t want to know too much too soon. I just want to be comfortable that I have a few stories that are interesting enough to tell.” The showrunner described planning the show being, “like slicing up a pie into multiple stories. There’s a lot of overarching thinking that goes on.” Some stories might remain in the current season, pushed back to the next season, or discarded altogether. The showrunner describes this as a skill TV writers only gain with experience. It is not a precise science. It’s a matter of getting the screenwriters thinking into The Handmaid’s Tale territory. “When you come up with the first three episodes, you guess the last ones. You don’t necessarily know what they are,” he added.

Like most screenwriters, Bruce Miller dreads looking at a blank page. He prefers to have some knowledge of the story before he starts to write anything. He has a novel approach to TV writing, “‘Asking ‘what’s going to happen next?’ won’t get you anywhere. Nobody knows. Let’s tell the story from the perspective of how we got here, not what happens next.”

We asked Bruce Miller if he saw a natural ending to The Handmaid’s Tale. He references the ending of Atwood’s novel where June records her experiences on cassette tapes (pre-CD and DVD) which were later found by historians and formed the bedrock of The Handmaid’s Tale. At that time, June was lost history until they found The Testament – the sequel to the first novel which was published in 2019. “There’s a natural end to June’s character when she decided it was time to tell her story.”

Miller pointed out that the book, “Had an ending, but not a final ending. In a sense, the novel has an episodic and continuing nature to it.”

There may well be spinoff stories about Gilead or other characters. The TV version of The Handmaid’s Tale has generated a life of its own for several years, so you can’t exactly align The Testament with it. “We’ll stay to it as closely as we can, but they come out of a different cannon.”

The first season of The Handmaid’s Tale, strongly referenced Atwood’s novel. We asked Bruce how subsequent seasons evolved given that they couldn’t rely on this source as much. “Margaret’s ability to set up the world of Gilead with good dynamics set the groundwork for the first season.”  This foundational world-building also sets the stage for additional seasons.

The showrunner attributes the runaway success and fanatical nature of the TV show’s audience to Margaret Atwood herself. “The dynamic of the book takes a certain kind of nightmare, for a certain part of the population, and brings it to life so vividly, specifically, and viscerally.” Being born into a world where women are no more than a reproductive host makes this such a powerful and gripping book.

Miller is a big fan of dystopian stories. He pointed out that The Handmaid’s Tale is very beautiful compared to other dystopian stories that are often dusty, gritty, and disorganized. “Gilead is very beautiful, thoughtful, and has great kitchens,” he pondered. “We are comfortable in underlying the successes of Gilead as a society.” That’s what makes this nightmare so compelling to audiences.

“I don’t know what’s going to happen in each episode and I don’t know how I’m going to feel about it when it does.”

The show’s creators allow the audiences to feel bad for Serena Joy Waterford (Yvonne Strahovski) and Fred Waterford (Joseph Fiennes) then they hate themselves for it.

Evil characters don’t see themselves as villains. “Even bad characters like Commander Grinnell (Chris Billett) do, they see as good. They consider their work to be valuable and noble.” Miller suggests, “Putting yourself in their brain and thinking of them as someone who is doing exactly what they want to do and creating a world they want to see.” Audience can use this advice, “so their reasoning is your reasoning.”

To further reinforce the point, the showrunner cautions against telling a dichotomous hero-villain story. “You should never tell anybody how likable the characters are. Write characters so your audience feels what they feel.”

Too many of those rules of thumb such as making the main characters likable or relatable were written during simpler times when there were far fewer shades of drama.

The Handmaid’s Tale has an undoubtedly harsh and somber tone despite its ubiquitous underlying message of hope. Miller prefers the term “feel” to “tone.” He acknowledged that it can be somewhat of a nebulous concept that generates differing emotional responses. “As you become a better TV writer, you know how what you’re discussing in a writers’ room feels on screen. You develop a sixth sense.”

The showrunner also allows the show time to breathe in its pacing. “I don’t like to rush stories. I want to slow down to explore and discover the literary value of the show.” This allows the TV writers’ to notice an interesting story when it arises and expand on it. “It’s like a piece of marble and you’re chiseling away trying to get the person out.”  If you chisel too fast, you might miss the person. “Being a little slower lets the audience pay more attention and absorb it.”

Bruce Miller would like the audience to feel urgent, angry and hopeful while watching The Handmaid’s Tale. The showrunner curiously sees all three tenets as positive attributes of the show. How can anger and despair be positive?

“Every time June gets through the day, I feel ‘if she can do that, I can do this,” he expanded. “June really is inspiring despite being told she’ll never fall in love or see her family again.” Along the way, she falls in love, helps people out, and made jokes… but also hurt people who deserved it.

June has carved out this life for herself that many people would not think possible in her circumstances. Every handmaid wears their outfit a little bit different to show off their personal style and flair. They experience a tiny piece of freedom in Gilead in this. “I love those kinds of victories. They’re small but significant.”

The Handmaid’s Tale has short, sharp titles for each episode. Some are dark (such as Mayday), some are upbeat (such as Heroic), some are cryptic (such as After), and some are non-sensical (such as Household). Great care is taken to select the titles as they are the first thing viewers and readers will see. They are becoming increasingly important in branding the show. Miller decides on each episode’s title at the beginning of the planning session. “They are borne from the style of the titles in the book.”

According to the showrunner, “The titles are simple and descriptive. After you watch the episode, the significance of them becomes clear.”

Miller offers his insights into what makes a successful TV writer. “Don’t worry about your public perception. Worry about things you’re genuinely interested in.” He is very hopeful for the future of television.

“It’s a spectacular time to get into any form of serial television. I also like the way features are going on streaming. platforms” You don’t necessarily need a cinema anymore. Not even for blockbuster movies.

You can also read our interview with Kira Snyder who also writes for the show.