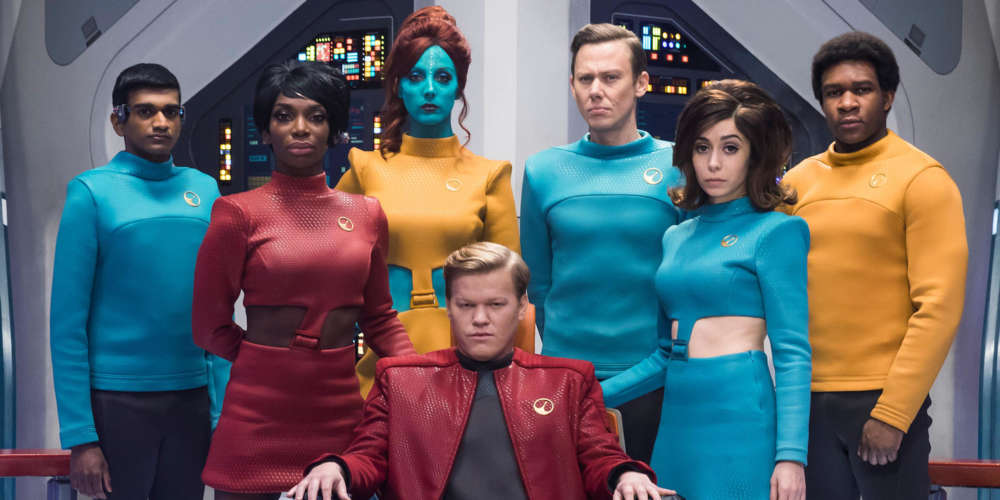 It’s a New Era Of Anything Goes For Scripted Television

For anyone interested in writing for television, or for any viewer wanting something different from the standard TV fare, 2019 represents a new era of “anything goes.” If rules are meant to be broken, scripted series television has embraced that philosophy with a vengeance. It’s a revolutionary time for the industry as the norms of what used to define a series, a limited series, or even a TV-movie have been mixed, jumbled, and discombobulated.

Audiences still are drawn to TV series, but what constitutes one is harder to nail down than ever before.

In the year 2018, there were a record number of scripted streaming, cable, and broadcast series produced, 495 in all. And who had the biggest share of that scripted production? Netflix and Amazon. Network TV was down 5 % and basic cable production dropped 17%, but some of that may be chalked up to the need of the more traditional platforms to regroup and rethink this new era of “anything goes” TV.

The cast of Gilligan’s Island

Time was, even as recently as ten years ago, most network television dramas clocked in at an hour, with 22-episode seasons. Sitcoms were just as consistent with 30-minute fare yielding 24 to 26 episodes a season. Even with basic cable and premium channels countering such rules with shorter seasons of 12 to 14 episodes, you could still count on them to deliver sitcoms in a 30-minute slot, and dramas in a 60-minute one.

And all that is significantly downsized from the norms of the industry in the 20-30 years before that.

In the ’60s and ’70s, for example, most dramas were an hour long and yielded at least 26 hours of viewing a season. Sitcoms were rarely less than 28 episodes a year. It’s one of the reasons Gilligan’s Island, which ran from 1964-1967, felt like a five-season show when it was bought for syndication. It yielded 98 first-run episodes in just three seasons.

The ’70s however, started to change the television game and how viewers digested TV series, with the major networks playing with the formula long before basic cable and HBO came to be. 1974 started the proliferation of the limited series, called “miniseries” in the day, with the adaptation of Leon Uris’ bestseller QB VIIinto a six-and-a-half-hour show shown over two nights on ABC. Its success led to ABC committing 12 episodes to adapt Irwin Shaw’s bestseller Rich Man, Poor Man two years later. Its ginormous success led to Roots, The Thorn Birds, and so on and so forth.

Suddenly, shorter form series were everywhere, with CBS and NBC joining ABC in adapting this novel and that one for television. Most of the miniseries created from bestsellers clocked in around at 8-12 hours, but even those norms were broken when NBC adapted James Michener’s sprawling novel Centennial in 1978 and committed 26.5 hours to it in prime time, including all the commercial breaks. It had the length of a regular series, but it wasn’t qualified as such.

From there, the lines between a regular series and a limited one blurred even more. When HBO rose to prominence as a subscription channel in the ’90s, they did so with original programming that went against the grain of traditional network standards on a number of fronts. Their shows were the length of the limited series on network TV, usually 12-14 hours in total.

They didn’t follow the traditional three calendars that the networks did – a fall season, a winter one, and summer replacement. Even more demonstrably, HBO didn’t have to follow the FCC rules of censorship because they were a subscription network. Suddenly content that would’ve garnered an R rating at the movie theater was beaming into televisions across the nation.

Thus, HBO programs like The Larry Sanders Show, Dream On, and Tales from the Crypt succeeded wildly by breaking rule after rule after rule. They started in off-months and didn’t always premiere in the same month over their subsequent seasons. More vividly, they were filled with naughty language, overt sexual situations, and violence that rivaled the grind houses on 42nd Street in NYC. It was fare that viewers started to flock to, and soon, other networks took heed. Basic cable created their own edgier, original dramatic and comedic series, all but ending syndicated shows.

Other premium channels upped their ante as well. The subscription channel Showtime changed from a slate of second-run movies and late night erotica into a genuine competitor to HBO. As they became more and more prominent in the new millennium, they produced original shows like Dexter, The Tudors, and The L Word that could stand proudly next to the landmark programs HBO was producing like The Sopranos and Sex and the City.

Al Pacino and Meryl Streep in Angels in America

HBO became a limited series maven during this time as well. In 2003, the adaptation of Tony Kushner’s Pulitzer Prize-winning play Angels in America yielded 352 minutes of television that was broadcast over the course of six hours. Its length resembled the regular series on HBO, but this one was only a one-off. Since then, almost all bets are off on just how to rigidly qualify a series, limited series, or a one-off TV movie.

Shows like FX’s American Horror Story, with eight seasons in the bag already, continue to play out like a basic cable series of 12 episodes, yet aesthetically, it’s closer in feel to a limited series each season. In fact, that’s how the Emmy’s have categorized it every year as the storylines and casts changes keep it from being received as a strict, continuing series.

Blurring lines further is Big Little Lies on HBO. The star-studded limited series from 2017 that won eight Emmy’s with its self-contained storyline of murder, gossip, and family secrets set in Monterey, California is now half-way through its second season. Even though the original eight-hours was designed, film, and presented as a limited series, its phenomenal success drove the order for a second season. The same cast have returned for the second season, but is it now considered a proper series or a limited series? There’s no 2 in the title, so we shall see just how Emmy voters judge it in balloting next year.

Then there are TV series like Black Mirror on Netflix which add more confusion to the mix, both for viewers and awards show consideration. The 2011 import from Britain’s Channel 4 has given us five series so far, with each year producing three episodes between 41 and 89 minutes in length. It too has scored at the Emmy’s, albeit not as a limited series, but in the category of TV-movie. USS Callister, one of its most prominent episodes from season four, won the Primetime Emmy Award for Outstanding Television Movie in 2017, raising more than a few eyebrows on its quantification.

In fact, Netflix has perhaps done more to mess with just how a show is defined than any other platform. Some shows are short, some long, and some of their most successful limited series, like The Haunting of Hill House, become so popular, they turn from a self-contained limited series into what more closely resembles a regular one. It will soon be returning for a second season even though the first season’s narrative appeared to be one and done.

AMC has followed suit, extending the idea of their successful limited series The Terror, a self-contained naval horror story set in 1845, into a second series that appears via the trailers and PR materials, to have little if anything to do with the original ten episodes other than its name. The new season is set in a Japanese internment camp during WWII, so don’t expect Jared Harris or any 1845 flagship to show up in this second go-round.

Jared Harris in The Terror

Such blurring of lines may frustrate the marketing partners tasked with selling such brands, or the Emmy voters for that matter, but does it take any real toll on the viewers? Probably not. Audiences tend to watch shows they like, no matter how they are quantified, or how many hours of participation they require.

Still, it’s more work than it used to be to find a show, commit to viewing it, and quantify it. The Marvelous Mrs. Maisel is an hour-long comedy. Amazon Prime’s Good Omens only is six hours long, but it’s a regular series, not a limited one. Docudramas on the Biography channel, like Killing Kennedy and Killing Lincoln, get categorized as TV-movies by the Emmys. It’s all a whir, but when television is as good as Chernboyl is on HBO, a show’s length or label probably doesn’t matter all that much. Still, TV Guide magazine has never been more necessary than in 2019.

Finally, what does it mean for TV writers? Well, for the novice, screenwriting contests are still quite stringent about the length and labels of entries. If you have a sitcom script, it’s probably best to keep it to 30 minutes. Dramas and dramedies can be more expansive in page length, but more and more you see room being made in all categories for challengers to the rules. As for writers in Hollywood who are already making a living, there’s more and more opportunity to change the game. Write what you know, of course, or at least what you’re interested in, but regarding how long it should be, or just where it fits on any given platform, more and more, that remains to be seen.