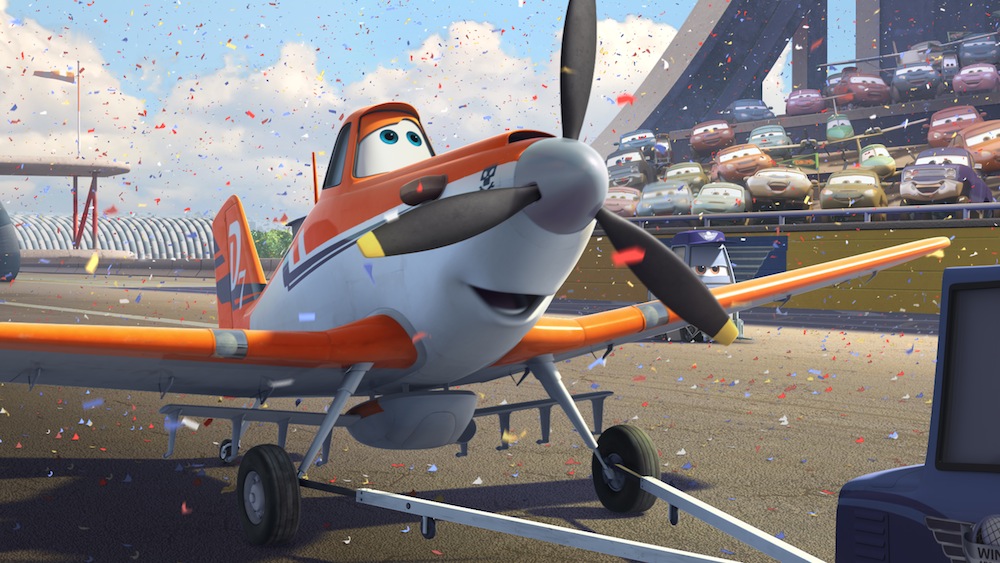 Disney’s Planes is an animated action comedy that tells the story of Dusty, a crop-dusting plane with dreams of competing as a high-flying air racer. But being a crop-duster, Dusty has one major problem—he’s afraid of heights. With the help of a seasoned naval aviator, Dusty’s courage is put to the test as he aims to reach heights he never dreamed possible.

Planes came about when John Lasseter and director Clay Hall started talking about what Clay’s next project was going to be after Tinkerbell and the Lost Treasure. The pair came up with an idea to do a movie about planes within the world of Cars. For Jeffrey M. Howard, it was a script he was born to write. “I’ve been into aviation forever. Before I decided to pursue moviemaking, I wanted to be a pilot, but my eyes didn’t stay good. In my senior year of high school, I started to need glasses and I said, ‘well, I guess I’m not gonna be doing that.’” Already working as a staff member on the Senior Creative Team for Disneytoon Studios, Howard transitioned smoothly into the role of screenwriter on the project.

Creative Screenwriting also interviewed Jeffrey Howard on breaking into Hollywood and working as an animation writer. Click here to check it out.

The idea then entered the enormous creative brainstorming process the studio has become renowned for. “John, myself, Clay and our creative exec Paul Gerard sat in a room for the better part of a day and worked on the idea.” The brainstorming session had the feel of a friendly-fire war zone, as imaginative ideas were machine-gunned across a room. “‘Okay, what if we do something about air racing?’ ‘What’s an unlikely hero?’ ‘How about a crop-duster entering an air race?’ ‘Let’s call him ‘Dusty’.’ ‘Let’s go to this country and let’s go to that country.’ ‘Wouldn’t it be cool if he has to go to an aircraft carrier and he has to get shot off the catapult?’ And a lot of these pieces ended up being in the movie.” From this chaotic maelstrom of creativity, Howard went off and wrote a much longer version of the pitch. “It’s a very back and forth process,” he explains. “We went through several rounds of pitches, then we’d pitch it to everybody in the company because with a big movie like this you want to get everybody onboard.”

Once the pitch phase was over and the creators landed on a solid story backbone, the collaborative process really kicked into high gear. “For lack of the worst pun in the world, the idea took off. We worked on the script, started drawings, created designs, got into the storyboarding phase, and that’s where stuff changes even more.” Howard also attributes extensive research as largely instrumental to the writing process. “John told us many times, talk to people who are pilots, who are FAA guys, who are mechanics, who are involved in military, civilian, commercial, all different aspects of aviation. Find out what their lives are like so you can incorporate that into characters.”

Deep examination into the machinations of aviation really helped shape and mold the film’s characters, particularly the lead. “With crop-dusters, for instance, we discovered that crop-dusting planes don’t really fly above a thousand feet because they don’t have to. They fly low and slow, they don’t travel thousands of miles outward, they travel many miles but all in the same little area. So that led us to a small-town guy who’s never really been anywhere and is afraid of heights, because he’s never flown over a thousand feet.”

One anecdote Howard discovered during the research process resonated with the screenwriter so strongly it made its way into the finished film. He explains, “There was one flight instructor who told us that in the old days they used to navigate by the iron compass, which was following the railroad tracks, because even before they had roads, there was always a railroad going from town to town. So if you’re flying to navigate before there were instruments or GPS, you would just lineup and follow the railroad track. There was an old joke about the pilot who said, ‘Yup, I followed the iron compass but nobody told me about the tunnel.’ So we sort of used that. There’s a sequence in the film where Dusty, because he’s afraid of heights, is trying to follow these railroad tracks through the Himalayas and the tracks go into a tunnel, and he has to figure out what to do.”

Howard goes on to discuss some of the challenges with animation. Because the process tends to be so lengthy, he says writers can lose sight of elements that worked when they initially wrote them. “A lot of time, Lasseter will tell us, ‘Remember your first laugh.’ Because by the time you get three years down the road, you’ve seen that joke a hundred times and you’re sick of it, but the audience hasn’t seen it once. That’s why it’s important to screen it for fresh eyes, for different audiences. You have to take some of those things into account sometimes.”

[Editor’s Note: For another interview with Jeff Howard on how Disney has adopted Pixar’s methods and the business of animation, click here.]

There’s a balance that needs to be found in animation between having fun with the world and the characters but also staying on story. Howard explains, “There’s an old Walt Disney quote, ‘With every laugh, we have a tear.’ And we’re always trying to find that balance of comedy and emotion in our movies. In terms of story, we never try to make it too complicated in animation, because then it gives you the freedom to explore character and comedy within an uncomplicated plot. We always want twists and turns, but we have to be really efficient about what we’re doing. Each scene has to have a purpose. When I do my story cards, I’ll have the emotional beat along with the purpose of the scene on it. A lot of it is about being super efficient. You have to make sure you have space in the story to explore character moments. Ideally, you want a scene that may seem like it’s purely comedic but is also moving the story forward in some way.”

As with any production, Howard wrote “many, many, many” drafts of the script. But the basic notion of what he and his collaborators initially started with, remains intact in the final film. “We set out to tell a story about someone who wants to do more than what they were built for and rises to the occasion and proves everybody wrong and proves to himself he can do more than what he was built for.”

The filmmakers have once again struck a chord with the powers-that-be at Disney. Howard is already at work on the follow-up animated film, Planes: Fire and Rescue.

Click here to read Creative Screenwriting‘s interview with Jeffrey Howard on breaking into Hollywood and working as an animation writer.