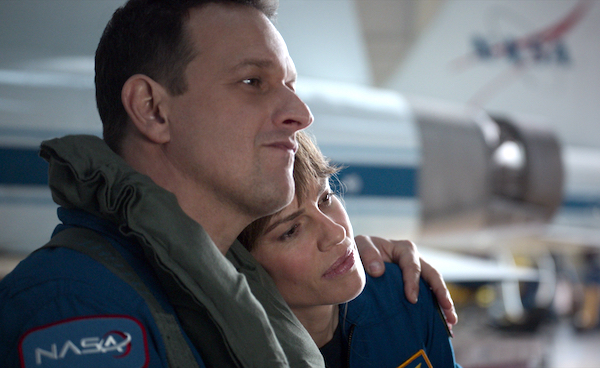 Away, is a television series inspired by an article in Esquire Magazine of the same name by Scott Kelly. The simplicity of its title belies the richness of its theme – being away from those that love and need most you to answer your calling. Created by Andrew Hinderaker (Penny Dreadful, Pure Genius) and co-written with Jessica Goldberg (The Path, Parenthood), Away stars Hilary Swank as astronaut Emma Green and Josh Charles as her husband Matt Logan, who was bumped from the mission due to a pre-existing condition. We spoke with Jessica and Andrew about the process of bringing this idea to life.

The Esquire article about astronaut Scott Kelly’s real-life experiences at an international space station was initially optioned by Matt Reeves and Jason Katims who co executive-produced the TV series. “The article looked at the emotional and physical cost of being in space. It explores the idea of being away from the people you love and also the strength they give you from a distance,” mused Hinderaker. The physical distance combined with the emotional closeness ironically made Kelly a better commander.

Screenwriters are often taught to write what they know. Most of us haven’t been aboard an international mission to Mars, Goldberg and Hinderaker included. Despite the exhaustive research they both undertook to familiarize themselves with life on a space mission, their main goal was to mine their personal connections to the thematics of connection through distance. They had the luxury of an astronaut consultant in the TV writers’ room they had on speed dial.

Hinderaker references a section of the Esquire article he found extremely poignant where Scott Kelly’s hi sister-in-law Gabby Giffords was shot at a political rally in Arizona and he was stuck on a space station. “Kelly struggled and succeeded in supporting his family while he wasn’t on the same planet,” he said. “For me, the personal connection was when my partner was diagnosed with a serious disease while I was away in Chicago.” Granted, being in different cities is less of a distance than different planets, but the feelings of isolation and yearning are no less powerful.

The main character in the TV series is Emma Green which allowed Jessica Goldberg to infuse her life experience into the story. “I felt it was an opportunity to articulate the working mom.” Goldberg was moved by Green’s depth, honesty, and integrity. “Emma loves her family, loves her job, is amazing at it. Away had room for all the conflict in that.”

Emma represents the link between space and earth which makes her the foundation of the show. Matt and her daughter Lex (Talitha Eliana Bateman) revolved around Emma. The intricacies of their relationships drive the show rather than the mission.

Having two writers at the helm of any television show is bound to cause friction with opposing viewpoints. Fortunately, this wasn’t the case for team Goldberg & Hinderaker. “We have a very similar way of looking at the story. We go over the story elements and go deeper and deeper into the characters,” said Goldberg. “We’re both driven by our desire to tell the richest, most emotional, and complex story,” said Hinderaker.

Atlas space station is an international mission and the writers exploited the cultural differences between the crew members. On a practical level, such space missions need to be global affairs financially and intellectually. In terms of servicing the story, it was a way to transcend our political and geographical differences and bring the world together. “There was something so hopeful about it, even though it was born out of pragmatic needs,” continued Hinderaker. “Humanity will always do better collectively.” One key reason Jessica Goldberg was attracted to the TV show was to realize, “The dream of the world coming together.”

Both Goldberg and Hinderaker cut their storytelling teeth writing plays. This provided them with a unique approach to the screenwriting process.

“Playwriting makes you look at character and plot more closely because it is less of a visual medium than film or television. You’re examining the human condition in more depth in a shorter time,” said Goldberg. “Despite plays generally being shorter than TV series, you still need to create characters so rich that you want to follow them until the end.”

“You start with nothing but the stage with playwriting so you must create immediately captivating characters,” expounded Hinderaker. “This affects the way you tell stories and how creative you need to be to keep the story moving.”

Despite being veteran storytellers, both Goldberg and Hinderaker still find writing for television challenging due to its voracious appetite for stories. No sooner have you outlined one episode, you need to start plotting the next until you arc an entire season. “Plot doesn’t come incredibly naturally to me,” confessed Andrew.

Hinderaker doesn’t believe the TV version of Away was strictly adapted from the Esquire article in the traditional sense. “The article inspired many of the ideas for the television show, but we didn’t transcribe it,” he continued. “We felt the article was emotionally deep. There was a soul to it that talked about the cost and emotional toll of going to space, and how astronauts are sustained by the people on earth through recordings and images to remind them of home. These core ideas filtered into the DNA of the TV show. It wasn’t about directly translating a character from the article into the show.”

There is no doubt that the expanse of space has a profound effect on humanity.”Some astronauts come back to earth after a mission and don’t see the world divided into countries. The see a whole planet. Writing on Away reminded me that we are all part of the same universe,” philosophized Goldberg.

“It’s dangerous and disheartening to be myopic to focus on just ourselves, our family, or our country,” Hinderaker chimed in. “Space makes your perspective more expansive. It helps us understand we are part of a vast cosmos and what we share as humans is miraculous. We have a responsibility to look after each other because we thrive better as a species.”

In conclusion, we asked the writing duo what makes a screenplay exceptional. “For me, it’s a writing voice that leaps off the page,” said Andrew. “You feel that a particular writer has a truly unique perspective on the world. They must bring something into the world and seem like an interesting person to work with who is asking profound questions.”