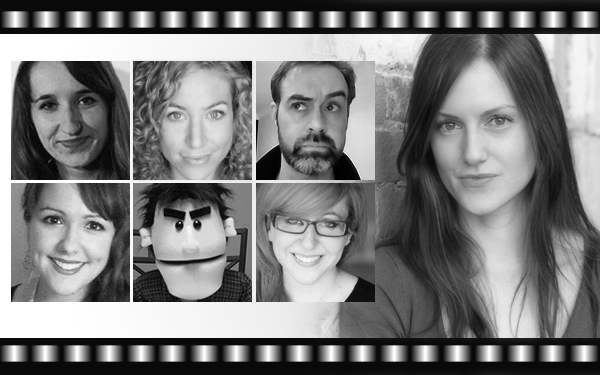 Script reader Jhan Harp was pursuing two degrees at Purdue University – a B.S. in physics and a B.A. in theatre – when he first discovered his passion for screenplays.

“Screenwriting, more specifically working on teleplays, was a hobby in college,” he says. “I guess it wasn’t easy enough with the two majors.”

Blame Joss Whedon and the early years of TV bingeing. During sophomore year, Harp’s best friend and future writing partner, introduced him to the TV series, Buffy the Vampire Slayer. “And within a short amount of days, we devoured all seven seasons, and then we dove into Angel, and Firefly, and basically gobbled up all of Joss Whedon’s work as fast as we could,” Harp recalls. “From there, we went onto Veronica Mars and Twin Peaks, and then I became obsessed with TV all of a sudden.”

Soon after, Harp was writing teleplays. “They were horrible, but I had such a great time creating and living in these worlds.”

It’s not surprising then, that after graduation Harp ventured out to L.A. He wanted to see what would happen first – writing or acting. He dropped acting “right away” when the writing proved to be more successful.

He served as the Story Department Coordinator for Scenario L.A., a literary management and production company, for a few years before moving on to AWOL Studios, where he currently leads the development team. Additionally, Harp has been ScreenCraft’s senior reader and pointman since 2013 and oversees the evaluation of over 6,000 scripts that ScreenCraft receives annually.

Creative Screenwriting chatted with Harp on what grabs him as a reader, the importance of having a reversal in your script, and why he loves TV so much.

What was it about watching those TV shows that ignited such a passion within? It is because you were bingeing on them and you were able to see how the stories eventually played out?

You get to know them so well and the stories they get to experience are so diverse. The odds of them going through an experience that you, as a viewer, have a connection with is so high. They cover so much ground.

Especially with a show like Buffy, which goes from high school to college to marriage, and works through issues like addiction, romance and LGBT. They just covered so much ground that you will ultimately find something you connect with. I think that’s what grabbed me.

Movies definitely resonate with me on specific issues, but you don’t get to stay with those characters.

When you are reading a script, what are some of the things that grab you?

One of the most important things that speak to me as a reader is when I see a reversal expectation. I think reversals are so powerful when done right.

Whether it’s in a comedy that gets a huge laugh or creating a situation that delivers a lot of conflict, or something that just grabs me and surprises me. It doesn’t have to be a premise that is super new or inventive, but just having something that you wouldn’t be expecting.

I think that is the clearest indicator of someone worthy of a pass. Someone who really brought their A game to a project. I think an early reversal, generally in the first 10-15 pages, I think that is the strongest way to get the ball rolling.

Other readers might think strong characterization or a strong premise as the most important, but I think a reversal is the strongest way to go.

What things bother you as a reader?

Page density, the white space issue. Most readers get paid by the script, so we really do want to read as quickly as possible so we can get food on the table. It’s a necessity in the industry that we read quickly, and if your script isn’t very dense, we will have a lot more time.

Plus, a writer who chooses their words carefully and has small scene descriptions and action lines with a lot of punch and specificity, it tends to be a hallmark of a writer who has put a lot of time in and has done the work.

If you give me a giant wall of text for the first few pages, I will read it but I probably won’t be happy about it.

Another thing is typos. It’s amazing how many people mess up standard homophones. Like the word “vile.” Either the villain or the container that holds liquid. Vile versus vial, and that’s ubiquitous in this industry.

Do you think that writers submit their work too early? That they’re not as polished as they should?

Yes, hugely. All the time. And sometimes that’s more okay than other times.

Sometimes if you have a really astounding premise but you need help developing it, that’s fine. But, on the other hand, if you enter your script for a contest because you want to win without putting in the time, then the odds of you doing well are very low, even if the premise is good.

If you’re asking for development assistance and you need help and you know that, then that’s a fine place to be. It depends on where you are submitting your work.

But, in regards to submitting to contests, there are a large number of writers who submit without doing the work.

I think writers just really want the opportunity to win and what that win could mean for their career, and they just don’t have the patience to wait.

Rewriting is tough. There’s a lot of work that goes into it. A lot of different sets of eyes needs to read something before it can have its best day in court.

I’m not of the opinion that a single writer can just stare at the same piece of work long enough and make it as a good as even one writer with just ten readers. I think readers are essential whether they’re your friends, your mother or a paid consultant.

It’s so hard to see the forest from the trees sometimes. I’ve written a number of projects myself, and I will look back at them a month later, and I’m just horrified.

As a reader for contests, do you think that’s a good way for a new writer to get read? To apply to different contests and fellowships?

I think in the current climate we have in this industry, it’s essential. If you have boots on the ground in Hollywood for five, ten, fifteen years, then, yeah, you will find other avenues to work. But if you’re not in L.A. or you haven’t been here for too long or you don’t love networking all that much, I think it’s an important avenue. I’m really glad it exists.

I know it’s still very competitive, but I think it’s crucial. Some contests and fellowships are more powerful than others, and then there are some with unique constraints to get in, but I think they are essential.

What are some key ingredients that a script must possess in order to win a contest?

A really dynamic first 10-15 pages. Something that really grabs you, ideally a reversal, at least for me.

I am reminded of a script that won last year in a ScreenCraft contest that just had a killer reversal in its first 10-15 pages. I was pretty sure I was going to champion just after those first few pages, and then it ended up winning.

Beyond those first 10-15 pages, just the standard stuff: make sure you have your strong three-act structure, that you know how that works; your characters are multi-faceted and have strong internal conflicts; you have a premise that, even though it might be generic, has something unique about it and connects you to it.

That there is a reason that you are writing this story, and nobody else. That is a pretty clichéd thing to say, but if you are writing something that you have a strong personal connection to, you will write it better than just the average guy.

But I should also point out that you shouldn’t write your own story. Often times, when it is so specific and unique, then it shouldn’t be something that is made for TV or film.

For the new writer, how can they improve their work? Should they take classes, read screenplays? What are some tips?

Reading screenplays is an interesting method of improving your craft because it can also cripple you if you’re not careful.

One thing that I discovered is that a script that often gets produced – not always, but sometimes — has so many different versions, so it’s not always clear what you’re reading. Particularly in the independent world, you will find scripts that are written for actors. It’s written before the actors are attached, so the script is written in a way that is attractive for actors, and then once the actors are hired, the script will change somewhat so it’s more of a production draft.

So I would say to be careful before you go to find the screenplay of your favorite movie because the draft you might find isn’t the one you’d be writing.

As a writer, you are writing a sample that showcases your skill and your ideas. But if you grab a production draft and go off of that, you probably won’t write a very good writing sample because the person who wrote that production draft wasn’t doing a writing sample. I think that’s something a lot of people miss.

In terms of improving your craft, I would say write something. Then get a lot of feedback, as much as you can, from different sources. Industry sources, friends and family. Then analyze that feedback with as little ego as possible. You need to sort of gather it like data. It’s very unlikely that one person will give you the perfect feedback so that you can deliver your script in perfect form.

So, aggregate your data, study your data and hopefully move forward with the elements that you think will help your story the most. Then, get more feedback after that, and rinse and repeat until you really have something that shines.

You said you liked TV more than movies, so what TV shows would you recommend?

I think everyone’s favorite go-to would be Breaking Bad. In terms of writing, it has a lot of great stuff in that pilot.

Personally, John Logan’s Penny Dreadful, is crazy. I wouldn’t necessarily go out and read the script because I have, and it reads more like a stage play, which makes sense. But that show has everything, in terms of world-building and characters – I’m in love with it.

And, of course, I have to mention Buffy because it was so inspirational for me. It covered so much ground, and character interactions and sub-genres, that I think people can learn a lot from it.

There’s some debate about what a writer should write: an original pilot versus a spec. Most people say an original. Would you agree?

Yes. The only reason of which I’m aware that a writer would write a spec is if you are specifically applying for a network fellowship, like at ABC or NBC. If you are really aiming for that kind of work, then write a spec. But in terms of getting a job, an original pilot would be most helpful to you.