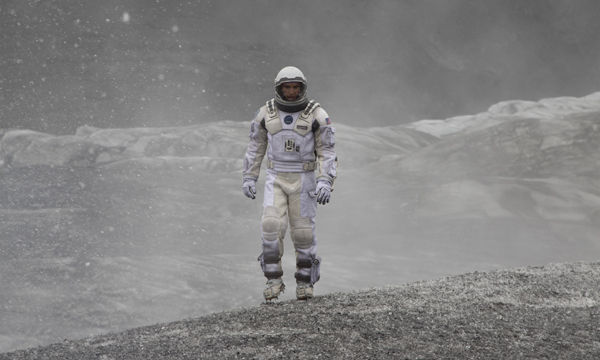 “Every collaboration I’ve had with Jonah has been different, because of different circumstances, and how we would work together. This one was very unique.” Christopher Nolan.

Jonathan Nolan, known to his friends as Jonah, has worked with his brother Christopher as co-writer on several films, including The Prestige, The Dark Knight, and The Dark Knight Rises. He found time to talk to Creative Screenwriting about his involvement in their latest film, Interstellar.

In a future where earth’s ecosystem has been all-but destroyed, mankind must turn to deep space exploration in search of a new home. The plot of Interstellar is grounded in hard science, following in the footsteps of films such as 2001: A Space Odyssey, Contact, Solaris, and Gravity, though its concepts of dimensional and temporal exploration bear thematic resemblance to Christopher Nolan’s own film Inception.

Christopher Nolan on an exterior set of Interstellar

Jonathan and his brother had always been fascinated with the idea of space travel. “We had grown up in the moment between 2001 – which was made before we existed – and CloseEncounters. Spectacular science fiction. But it felt a little like misanthropy had crept in there a little bit. Maybe we were an unlikely team to tackle something with a more positive take on sci-fi. But there is a bracing optimism to Interstellar — the next chapter in the human story will be optimism.”

The setting of Interstellar is hardly an optimistic one. But Jonathan argues that this is not fundamental to the film’s narrative. “If you look at the way we’ve fucked up this planet, absolutely,” he admits, speaking as much of the real world as his film’s setting, the latter perhaps seen by Jonathan as an inevitable extension of the former. “But we also got to the moon, which is pretty spectacular: for a bunch of bald monkeys to ride a ship to the moon.”

To ensure that the scientific elements of Interstellar were as accurate possible, Jonathan enlisted the help of theoretical physicist Kip Thorne, also a producer on the film. “I sat around with Kip discussing what a wormhole or black hole might look like,” said Jonathan. “Black holes are really interesting – they are out there. The universe has more of them than you can possibly imagine, how frequent a black hole is in the landscape. They are spectacular, interesting and real, but they are black holes – how do you portray that on film? The warpage of light around it?”

This combination of a pessimistic setting, together with the hope of a solution that science offers, is fundamental to the film. “After years of talking to astrophysicists,” Jonathan explained, “it’s totally obvious that there’s life out there in the universe. But it’s so far away in space and time, that the life we know that exists is our own, and it’s incredibly fragile. I spent six hours talking to biologists and astrobiologists on all the ways that life could become extinct on earth, such as a tiny change in solar radiation which would extinguish us immediately. At some point, we will either leave this planet or perish. Humanity is fragile – the earth is a nest or an egg where life develops, but not where you stay. So we imagined that moment, a moment in which the planet shrugs us off like a tick. We either leave, or we’re dead.”

With the idea for the film thus established, Jonathan began working on the screenplay. At first, however, he did not have his brother Christopher in mind to direct. “In 2006-2007, my original pitch was with Steven Spielberg. What Steven wanted to make was a contemporary space exploration film grounded in physics,” said Jonathan. “But if Interstellar was set now, it would last 15 minutes, and no one would do anything! Then in a million years, they would find a desolate mudball, a flag on the moon, and say they almost made it; look how far they got!

“In terms of space travel, we are in one of the lowest ebbs we’ve ever had,” he continued. “Presidents making speeches about going to Mars. But we are bleeding NASA dry; this is not a priority for us anymore…Imagine a future where we are so embarrassed and humiliated that we’ve succumbed to already prevalent widespread conspiracy theories that we never went to the moon in the first place. Who wants to imagine that we once were able to do these things but now could not?”

Instead of setting the film in the present day, then, Jonathan chose an unspecified future, thereby avoiding today’s limitations on deep space exploration. Looking forward, he imagined a future in which NASA was operating covertly. And he claims that this is not so far-fetched, and that the future of space exploration might even be in the hands of private individuals.

“What changed,” Jonathan explained, “was that I got to know Elon Musk, who said, ‘We can do this. If the government isn’t going to do it, I’ll do it.’” (Elon Musk is a Canadian-American business magnate and investor.) “There are still committed people who have the resources and the dream to make this happen, who are going to keep that fire lit, literally. So I feel a lot better about it than I did.”

“I don’t tell anyone how to view the world,” Jonathan added. “But that curiosity and our urge to explore and push out past our comfort zone on earth is inalienably, objectively, a good thing. Something that will save us…It’s still imperative that we explore.”

Jonathan Nolan and Spielberg worked together for three years. “Talking story with him is every bit as exciting and thrilling as you can imagine,” Nolan said of Spielberg. “Every time we’d sit down. The man speaks pure cinema.” But the project ultimately failed. “Like getting a rocket off the launch pad, some things take off, and some don’t.”

So in 2010, Jonathan turned to his brother Christopher, in whom he found a willing collaborator. As such, Interstellar represents the Nolan brothers’ fifth movie together. “The first was a short story,” said Jonathan Nolan. “Then on Batman Begins, I did production rewrites; and on Dark Knight and Prestige, I wrote the first draft. He would then take a pass before going off to shoot them.”

Having completed The Dark Knight Rises, both brothers committed themselves to Interstellar. “We found ourselves in a moment in which we very much wanted to get the film made,” said Jonathan. “I had been talking to Chris about it from the beginning. He had been a great sounding board over the years, and vice-versa…It was very cool to wind up making the film together.”

On the set of Interstellar

After working together with Jonathan on the script, Christopher then took his own individual pass through it. “I worked on this [Interstellar] for three years,” Jonathan said, “and then he took it and ran with it. It was a case of, ‘Here’s what I think this could be…run with it.’

“But a good portion of it retained,” Jonathan said of his original screenplay. “The spirit of the film is intact. Chris saw what I wanted this to be in terms of bracing optimism. It had to be about the next chapter. It had to punch you into the future.”

It was not only the sci-fi elements of the script which appealed to Christopher, but also the more personal aspects. “The idea that it’s about a father and his children — that’s one of the things that Chris really responded to,” said Jonathan. “I view my job in screenwriting mode to pack ten pounds into a five-pound bag. Laying out a feast…’here are ten cool ideas – use four of them to make the film’. There was an awful lot in that first draft: aliens and robots…Chris came to it with a laser-like focus for the human story, and our quest to survive, and his ideas of what we would find beyond the wormhole. He came to the script with a different perspective on it, and that’s really exciting. It’s always great collaborating with my brother.”

To date, Jonathan’s involvement in their films has always been as ‘just’ a screenwriter, relying on his brother to direct. Yet it is an arrangement that he seems happy with. “The fun part of collaboration in film is that you have to let go of some things,” he said. “I believe that the writer is critical to getting a film made. But film is a director’s medium – everything is secondary to the image; otherwise it’s a play. It’s shame that they are making bigger and fewer films, but I don’t mind the renewed emphasis on spectacle and cinema. There are ways to make the Terry Malick films or Kubrick films—all an emphasis on the vision, this hallucination in a dark box. That’s where the writer has to let go a little bit; allow them to go do their work.”

Jonathan Nolan’s experiences with his brother as a co-screenwriter through their five collaborations seem wholly positive. “It’s super exciting and nice to work with Chris,” Jonathan said. “We’ve been talking about films for many years. That trust is kind of built-in.”

The process of collaboration itself varies from film to film, however. “There was a lot more of that back-and-forth with Batman Begins. He’d be at the studio every day dialing in the Batmobile in Shepperton. I’d sit back in the hotel and crank out pages, and we’d bash it together. Dark Knight, I had a draft, we kicked it around, he did a pass, I got in and kicked things back and forth. On Interstellar, I had pieces I didn’t have time to articulate in the draft, so I said ‘Here’s ideas that I wasn’t able to weave into it. Have fun.’ He went off and did his thing with it, and I thought it was great.”

Yul Brynner as the Gunslinger in Westworld (1973)

Next up for Jonathan is his directorial debut, with a TV adaptation of the 1970s classic film Westworld, originally written and directed by Michael Crichton. “I drafted the pilot over the summer,” he said. “I’m going right now to go over the sound mix. Great fun. Incredible cast and unbelievable crew. Nathan Crowley from the movie [Interstellar] designed it. I’m very hopeful that we’ll go forward to series. Someone asked me yesterday the difference between Interstellar and Westworld… Interstellar is our hymn to the human spirit. And Westworld is the exact opposite.”

Scott Essman is the Creative Director of Visionary Media. He teaches at the University of La Verne, The Art Institute of California, and California Polytechnic State University, Pomona.