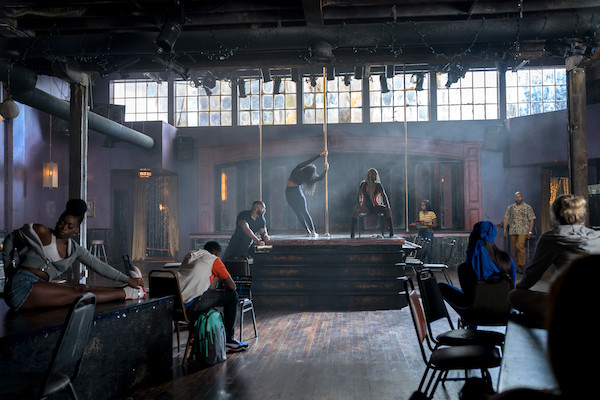 “Down In The Valley…” goes the song in the opening credits of P-Valley. But this is no ordinary valley. It is the Dirty Delta of Mississippi where the girls “shake it” in front of adoring audiences as part of a normal day. The TV series on Starz began its life on the stage from playwright Katori Hall over a decade ago and now, its time has finally come to repurpose itself as a character drama for television.

Rather than stooping to the superficial level of leering eyes and female victims beaten down by life, Hall’s main goal was to give marginalized voices from people that are traditionally made to feel invisible access to our screens. “As a black woman, I haven’t always felt my voice was articulated in a clear and nuanced way,” said Hall. “P-Valley is a television series about complicated black women who unapologetically chose stripping as a profession.” P-Valley is fierce, Southern and life-changing.

It should be noted that in the South. strip clubs such as the Pynk, are not necessarily the grubby, seedy places you don’t want your relatives to see you in. They are meeting hubs; a town square (or stage) of sorts. All manner of events occurs in these establishments ranging from birthday parties, weddings, and even baby showers.

Katori Hall deliberately avoided the stereotypes of broken women who turned to stripping through a lack of choice. “The women of P-Valley are strong and have these special athletic skills which need so much training to acquire.” These women are bona fide athletes and demand to be respected as such. “The show is a celebration of their bodies while they being stigmatized and marginalized by society.”

P-Valley had a decade long gestational period. The play version (called Pussy Valley) leaned more on the theatricality of strip clubs, while the TV version could build on that experience to dive more deeply into the characters. The Pynk was the Cirque De Soleil of the South.

“Seeing women perform death-defying acts, climbing two storeys high in the air, and then plunging head first toward the floor is the ultimate entertainment experience.” They are truly artists of the pole. They own it.

Adapting her play into a TV series gave Katori more latitude to create characters that were “relatable, lovable, and understandable.” The biggest challenge during the adaptation process was extending the story engine from a few hours on stage to a fleshed-out eight-part television series. “We had to hold the audience’s interest for so much longer.”

When Hall started her TV writers’ room she began the outlining process by writing all the key character moments, the plots, and the subplots. “Everything in the TV series was a logical extension of the characters on stage.” Nobody was completely fabricated in the TV writers’ room from scratch.

The Pynk is a uniquely Mississippian club set in a richly textured southern world. “It exists as an oasis in an otherwise economic desert with few job opportunities. These women are made to feel ashamed of themselves and barely recognized as human beings.” Katori capitalized on this conflict between (wo)man versus the world. Her characters rejected these societal perceptions of them and forged their own path.

“We turned this paradigm on its head and created a place where women could have a sense of agency and control of their lives inside and outside of the strip club.” P-Valley is a place where women are empowered, enterprising, hardworking, and uniquely complicated in the world of grit and glitter. Victimhood is absent from their lexicon.

P-Valley chose not to slide into the realms of strip club voyeurism despite the copious amount of skin flaunted on screen. The skin was just the surface. “Although the audience ogled these women’s bodies, they were actually drawn into their feminine experience.” Even the nudity was carefully choreographed. Katori Hall avoided sanitized suggestive nudity as much as the harsh, sweaty close-ups that left nothing to the imagination. It was all in service to making the audience become more intimate with these women on a deeper level. They didn’t just come to see them. They got to know them.

P-Valley drives the series on the family drama more than the dancing to keep its audience watching.

The women of P-Valley often have tenuous relationships with their families. Their on-stage colleagues consequently act as their surrogates. “Unfortunately, many people are born into families who are not there for them.” Katori Hall cites Mercedes (Brandee Evans) the exemplar who wrestles with a highly manipulative, unsupportive mother. Mercedes eventually found both her surrogate mother and father in Uncle Clifford (Nicco Annan), the non-binary club owner and her fellow dancers.

Clifford was warm, but also meted out tough love when required. “Because there aren’t many non-binary characters on television, Clifford had to be the uncle, mother,  father, and therapist you never had.” He was someone celebrated for being who he is despite the rampant homophobia, especially the black southern communities. “There is still a lot of discomfort associated with non-binary people.” Katori sought to tear down the wall between communities by beaming Uncle Clifford into people’s living rooms and bedrooms. “Queer people are real. They cry. They fight. They love. They’re just like you and deserve our empathy and respect.”

Uncle Clifford enjoyed the best of both gender worlds. She/her are resolutely her pronouns of choice, but she would never rescind her “Uncle” title.

P-Valley has an ensemble cast despite predominant appearances by Mercedes. “There are no minor characters in the show. Even the security guard Diamond [Tyler Lepley] has an important role to play. Every character is transformative. Every small character paid off.”

After further cajoling, Katori Hall committed to the idea that there is a trinity of main characters – the dancers (particularly Mercedes and Autumn Night (Elarica Johnson), and Uncle Clifford, who’s character trajectories have the biggest impact on all the storylines.