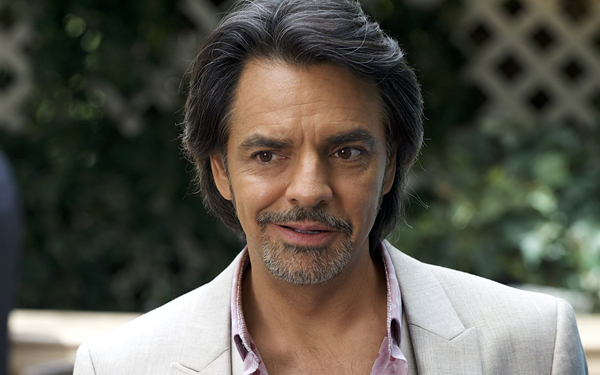 “Tell the Story Through Jokes.” Chris Spain & Jon Zack reveal How to Be a Latin Lover

After his marriage fails, a man who spent his twenties seducing older women discovers he’s no longer the prize he used to be. Forced to move in with his estranged sister, he finally learns about life and family.

How To Be A Latin Lover stars Eugenio Derbez and Salma Hayek, along with an all-star cast of comedians. Chris Spain and Jon Zack co-wrote the film, which was directed by actor-comedian Ken Marino.

Creative Screenwriting spoke with the screenwriting duo about the influence of farce, how to ground jokes for an audience, and how to tell the story through the jokes.

This interview is also available as a podcast! Listen to it here.

Salma Hayek as Sara and Eugenio Derbez as Maximo in How to Be a Latin Lover. Photo by Claudette Barius

How did you guys get involved with screenwriting?

Jon Zack: We had a public access sketch comedy show together in New York, in the 90s. That’s how we first met and started writing together.

Who were some of your inspirations back then? Who did you look up to or what types of comedy did you enjoy?

Chris Spain: That is a good question. Back then I think we were more interested in doing gags or sketches. Having grown up watching Monty Python, Saturday Night Live, Airplane, Naked Gun…kind of filmed jokes, rather than extended storytelling by any means.

How do you create a story around the sketches?

Jon: Well, it’s always got to have that three-act structure. I don’t think there’s any other way to do that, and hopefully it has some heart, too.

Then, you try to make the jokes come out of the story, so they’re not just sitting there with no purpose. Try to tell the story through jokes. Try to have a character that is flawed in a funny way that you can keep drawing upon for jokes. Just try to keep it part of the story.

Rob Lowe as Rick and Eugenio Derbez as Maximo in How to Be a Latin Lover. Photo by Claudette Barius

Do you ever ground a comedy within a drama? I remember when Out Cold came out, there some comparison to the story within Casablanca.

Jon: Yes, we always steal from dramas, and look at other movies. A good comedy is just a drama or dramatic story that’s  funny. So you can start with a drama and then make it funny.

Chris: If it’s too whacky or out there, the audience can’t relate, or the audience won’t care what’s going on with the characters.

Can you think of any examples that were “too out there”, which you cut for the final version of How To Find A Latin Lover?

It was originally an R-rated, two-hander with Rob Lowe and Eugenio Derbez’s characters.

Then when Eugenio came on board, we tailored it for him and his audience, and they want a lot of heart and emotion. That’s when we started turning it more into a family-type of comedy.

We added the character of the nephew, and that became the engine of it.

We originally had him go down some pretty dark places in the third act. There was like an Eyes Wide Shut type of sex party with old people. I’m really glad we met Eugenio and chose not to do that.

Chris: Eugenio definitely led us towards the light, and I think everyone and everything benefitted because of that.

Jon: The movie is really sweet now, and I think that’s what sets it apart. That was all his doing. And Ken Marino, the director, who did a great job with it too. But Eugenio had that vision for the movie that is was going to be funny, broad and also sweet.

Ken Marino with Eugenio Derbez on set of How to Be a Latin Lover. Photo by Claudette Barius

This was Ken Marino’s directorial debut. Did you guys get to work with Ken on set or while writing the screenplay?

Chris: Yes, we did. We worked closely with Ken. I’ve known Ken for a long time. He’s a good friend, so it was great to be able to work with him, and he took it super seriously.

It was his first feature, and he brought so much to it, with his specific sense of humor. A lot of the cast were friends of his that he called up, so it was pretty amazing to watch him put that cast together.

With so many comedians on set, how much improvisation was involved on this film?

Jon: There was a lot. The Robs did a lot of improving.

What were some of the dramas that cinematically inspired you to write this film?

Chris: The interpersonal aspect, and the family dynamic…

Jon: About A Boy, early on. That relationship of the overgrown man-child who hasn’t grown up yet, but is then faced with some responsibility, and how he adjusts to that. That was one we looked at early on.

And You Can Count On Me, which is another similar set-up. That one he’s an uncle, who literally shows up out of the blue and knocks on the door. That movie, particularly, was pretty funny throughout even though it was a serious subject matter.

What are the logistics of your writing partnership?

Chris: I think we are really partners in the truest sense. We sit right next to each other in our office, and all the steps we do in lockstep—brainstorming, outlining, scriptwriting. Early on in our partnership, we would outline and then go off and write scenes, then pitch it together. But we realized it was more efficient, productive, and creative if we were just in the same space.

Jon: So, nine-to-four, or ten-to-four, every day. Chris comes over to my house and we have an office there.

What else has changed over the years, as you have moved from sketch-writing to feature films?

Jon: There was a long break in between. We had the sketch comedy show and then we went our separate ways, and kind of rejoined for the features. It’s always been movies, but we are wading into television a little bit and trying to enter that world.

Raquel Welch as Celeste and Eugenio Derbez as Maximo in How to Be a Latin Lover. Photo by Claudette Barius

What qualifies a joke for one of your comedies? How do you decide if it’s funny enough, or if you can make the scene better?

Chris: I think we’re definitely one another’s market research group. If I think something is funny but Jon doesn’t think it’s funny at all, it’s a dead issue, and vice versa. I think we trust each other’s sensibility.

If we realize we can’t build a scene around it, then maybe it’s just a throwaway line. I think we can gauge this based on how we react to it, or what import it has in a scene.

Jon: You can’t really argue to someone that something is funny. If the other person doesn’t laugh, we move on.

I think good jokes in a movie like this should have a visual component. There can be really funny dialogue in a scene where it’s just two people talking, but unless it’s hilarious it could be kind of a boring scene, so we try to make sure it has a visual component to it.

We do try to go back and look at jokes and see if we can add to them, like the Zuckers [David and Jerry Zucker]. Or the classic example would be in Something About Mary, where he answers the door and it’s dangling from his ear, and you think that’s the joke, but then they twist it to the next level.

Those are always an opportunity. Sometimes, if you write a good joke, you think that’s settled, so you look at the other holes on the page. But you can make a good joke great by adding another step to it, so we try to do that.

Ben Stiller as Ted in There’s Something About Mary

What was the original idea that sparked How To Be A Latin Lover?

Jon: There was a picture of Anna Nicole Smith and her 85-year-old husband, where she was fighting with his kids over his inheritance, which he had given to her in court. That’s kind of tragic for her, but we were laughing about the idea.

We thought that was pretty funny and that’s a character that you can laugh at. I think that was the origin of it, that photo.

What was the time frame like for this script?

Jon: It took about a year or a little under a year. We did a lot of outlines with those characters, and a lot of drafts, too. But a year isn’t that long to get a movie made.

Kristen Bell as Cindy and Eugenio Derbez as Maximo in How to Be a Latin Lover. Photo by Claudette Barius

Do you write more than one story at a time, or do you stick to a single project?

Chris: It depends. We’ve worked on multiple things at the same time, but ideally we’d like to focus in on one thing, so we’re thinking about it even while we’re not working.

What we like to do is outline, and come up with a really specific outline that has all the details of the scene, and then we write the script itself. We count the outlining process as a huge part of the scriptwriting process.

Finally, are there any future projects you can discuss?

Jon: Hopefully a sequel to Latin Lover! We started talking to them about that, so we’ll see.

How to Be a Latin Lover is in theaters today.

Featured image: Eugenio Derbez as Maximo in How to Be a Latin Lover. Photo by Claudette Barius