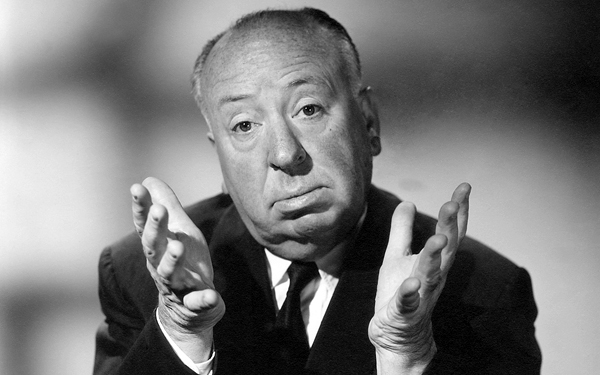 One can accuse Alfred Hitchcock of being many things, but unintentional is not one of them. His films were constructions, designs of often epic thematic proportions that commented upon themselves even as they fooled us into being entertained. Donald Spoto, in his well-known text The Art of Alfred Hitchock: Fifty Years of His Motion Pictures, quotes the director stating as early as 1935 that he hoped viewers would see his films “at least three times, in order to pick out all the details and the intention behind them, and in order to get deeper into things.”

The Art of Alfred Hitchcock, by Donald Spoto

Hitchcock famously storyboarded his work to the point where he is often cited as claiming his movies were already made before he shot them.  Indeed, Hitchcock’s visual style, his subjective camera, his German Expressionist influenced set pieces, these all tend to be the benchmark people use to laud his directorial vision. But Sir Alfred’s preparation of the screenplay included the design of the characters and dialogue, and he worked in concert with his screenwriters to make these aspects share equal prominence with the position of the camera.  Also in Spoto’s book, Samuel Taylor, who co-wrote Vertigo, noted, “I sat down every day with Hitchcock and worked it out step-by-step… Working with him meant writing with him. He never claims to be a writer, but he does write. A screenplay for Hitchcock is a collaboration, and that is extremely rare.”

In William Baer’s Classic American Films: Conversations with the Screenwriters, Josef Stefano, who adapted Robert Bloch’s Psycho for Hitchcock, readily corroborates this idea.  “He always gave me the feeling that he somehow knew I was going to write a good script which he could shoot effectively. This, of course, is the rarest gift that a producer or director can give to a writer: total confidence.”

This sort of totality of experience incorporated into the preparation of a screenplay provides a great lesson for screenwriters: yes, we can deftly underscore our themes with recurring motifs in character and dialogue that contribute to the artistry of our craft. Even if no one notices (at least on the first go-round), we know they are there, and working subliminally on the reader/viewer. Hitchcock’s films are a great jumping-off point for this study because everything he put on screen was so deliberate; hence, we know there is nothing random about the placement of certain ideas and repeating concepts intended to create a rippling undercurrent of thematic unity. But, rest assured, the tradition goes back thousands of years. Sophocles’ Oedipus the King, dubbed “the perfect tragedy” by Aristotle and, as such, often cited as one of the cornerstones of what we now call 3-Act Structure, contains dozens of references to sight, blindness, eyes and vision, all used in context and woven seamlessly into the dialogue.  We barely notice them and yet are constantly, subconsciously reminded of these ideas throughout the play. Which is fairly resonant, given that the play culminates with the protagonist tearing out his own eyes.

In Rear Window, James Stewart plays L.B. “Jeff” Jeffries, a risk-taking photographer who, confined to a wheelchair after an accident, develops an obsession for spying on his neighbors, one of whom might have murdered his wife.  That Jeff rudely shuns intimacy and refuses to see how much pure love he is being offered by society girl Lisa Fremont (Grace Kelly) reflects on his defeatist attitude toward all the relationships going on behind the windows that fuel his voyeurism.  As the film progresses, Hitchcock and screenwriter John Michael Hayes casually imply that Jeff’s subconscious desire to be “rid of” Lisa is manifesting itself as a murderous fantasy as he becomes engrossed in the murder plot across the way.

With this thematic background in place, the film spends much of the set up reinforcing Jeff’s constant negation of Lisa’s feelings for him.  Before any dialogue is even spoken, part of the establishing shot of Jeff’s apartment settles on a photographic portrait of a woman in negative.  The idea of not seeing what is right in front of you and wishing it would just go away is then explored in small ways throughout the story.  Here are a few examples:

Vertigo takes negation a step further. James Stewart, this time plays John “Scottie” Ferguson, a retired cop with a fear of heights who becomes obsessed with a woman he believes to be dead—only to twistedly remake her again in the image of his deceased beloved.  The credits announce a mask-like face and spiraling movement, setting us up for the themes of the roles we play in our futile attempts to achieve lasting romance, and the dizzying push and pull that occurs when we foolishly wander into pursuing a phantom, impossibly idealized relationship instead of living in reality.

Psycho, as with most of Hitchcock’s films, is on the surface a thriller, and under the surface a commentary on a variety of themes. Most prominently, it is a warped look at mother love and, by extension, a (literal) “stab” at the heart of the American ideals of happiness and how to achieve it through marriage, respectability and money.  The script also works in foreshadowing of both the horrific shower murder and the ultimate fate of Norman Bates, as well as trading in bird imagery, reflective of Norman’s interest in stuffing them.

When carefully and thoughtfully worked into our screenplays, layers of meaning can be added to our characters and themes.  Hitchcock, a filmmaker who made clear, conscious choices about everything, is a good starting place to begin examining how to deliberately design our own works as carriers of our themes and, most importantly, how not to let everyone know—at least right away—that we are doing it.