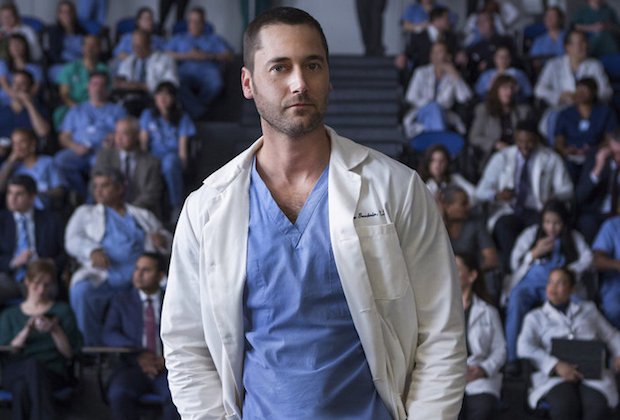 In the saturated sea of hospital procedural TV shows, a refreshing show on NBC called New Amsterdam landed on our screens during the fall TV season. It quickly became a smash hit and NBC expanded its order to a full season. Creative Screenwriting Magazine spoke to the show’s creator and showrunner, David Shulner about the inspiration behind New Amsterdam, headed by its sassy frontman Dr. Max Goodwin (Ryan Eggold,) a physician who sets out to “get into some trouble” and do good.

“During and after the Presidential election, the whole country was talking about health care,” said writer-producer David Schulner. “No matter which side of the political aisle you were on, there was a place of agreement, which was that the current healthcare system was broken.”

In the official trailer for the medical procedural, we’re introduced to Dr. Max Goodwin, who is the newest medical director at New Amsterdam Hospital. “Will everyone in the cardiac surgical department please raise your hands?” the character asked, before firing everyone who “places billing above care.” Huh? Medical hijinks ensue.

Specifically, Schulner was interested in presenting “intelligent conversations about healthcare.” He had the epiphany, “Why would I want to go home and write about anything else? All the drama on the news was about this one subject. The only thing missing from the conversation was hope.” Change is possible.

Schulner recognized the despair and passion about the subject, which essentially affects everyone in America. After a handful of initial conversations, he began his research with the book, Twelve Patients: Life and Death at Bellevue Hospital, written by Dr. Eric Manheimer.

“Here’s someone [Manheimer] who came into Bellevue, which was struggling at the time, fired an entire department, hired all new attending physicians, essentially replacing the med students who were running the hospital, and putting himself in conflict with the medical school.”

“He turned America’s first public hospital into a world-class medical center,” said Schulner. “It was a perfect metaphor for our current healthcare industry.”

Schulner said his intention wasn’t to set America apart, but it was more about creating America’s first public hospital. In the example of Bellevue, there is a prison ward for Rikers Island inmates, along with a judge and courtroom on the premises, and an ICU for United Nations Ambassadors, which is down the street.

While creating the radical character of Dr. Max Goodwin, Schulner and company decided he was reckless at his worst, but idealistic at his best. “Hopefully, we try to find the moments in the script where those two things can meet in the middle.”

In an early episode, there’s a homeless man—known as a ‘frequent flyer’ for his many emergency visits—who comes in for a bed for the night or for an infection. Max goes through the man’s records and realizes this individual is costing the hospital $1.4 million per year, so it would be cheaper to rent an apartment for $48,000 per year. These are the sorts of outlandish, yet effective solutions Dr. Goodwin finds.

The controversy, of course, falls on this major decision. The man is someone who isn’t going to get a job and doesn’t deserve an apartment—not to mention it opens up copycat situations—but it’s an intriguing, radical solution. “It’s idealistic, but it’s going to save the hospital a lot of money that can be spent on other people.”

“Those are the kinds of stories we’re looking for, but it’s going to get push-back because you’re giving something to someone who doesn’t deserve it. It’s completely un-American and yet, it’s the best thing for this hospital at this time. We also get to explore the politics of the homeless population and the sociopolitical atmosphere outside the hospital that brought the man into New Amsterdam.”

With such a noble pursuit, there’s a clear tightrope to walk in an effort to avoid the series turning into a cause-based soap, built to tackle weekly controversies. “We’re embracing that aspect of the show and not shying away from it.”

The writers behind New Amsterdam want to look a way to create permanent solutions to frequent medical Band-Aids. “What can we do that is a more permanent solution?” repeated Schulner. Essentially, the writers want to explore ways to better help people while spending tax dollars in the most beneficial way possible.

Standing Out In The Crowd

There are countless hospital shows on the air, but the TV writers behind New Amsterdam knew they wanted their show to be different.

When Schulner discovered Eric Manheimer’s book, several points stood out. It was a hospital with unique facilities and ran by an idealistic risk-taker. “Eric was such a Maverick that he never unpacked his office when he started his new job because he always assumed he would be fired. It was three years before he unpacked his boxes.”

In addition to the protagonist and the unusual setting, Schulner was also interested in the idea of Eric becoming a patient himself when he was diagnosed with Single-Cell Carcinoma. As the pieces started to form together, the writers also hired screenwriter David Foster (House) and spent a great deal of time with Eric to discuss episode ideas.

In terms of today’s television landscape, the screenwriter said America went from three shows that everyone watches to a hundred shows that various niche audiences watch. That said, there is truly something for everyone in terms of watching and creating television.

In terms of New Amsterdam, the creator always wanted for it to be a network series rather than a show for cable or streaming services. “It was built in the tradition of ER or The West Wing—specifically built as an NBC show. So, it was even narrower than a broadcast show. It was deliberately targeted as an NBC show.”

“I wanted the hospital to tell patient stories and character stories.” Based on these initial ideas, Schulner’s producer mindset meant targeting NBC. Once they knew the general framework of the show, they could start to splinter out and create new stories and ensemble plot points.

When outlining the episodes, Schulner said much of the work comes in the end during the editing process but it begins in the writer’s room. Around ten writers work on the show, where one or two may be on set at any given point. Schulner works with writers to pitch ideas two weeks before they enter the writer’s room.

“Throughout the process of emailing or talking on the phone beforehand, we solidified everyone’s stories before we even started,” he said. “I have each writer of their episode run the room, rather than me running the room. They field questions and cherry pick the best ideas. I may be a deciding vote for the general direction of the show and then I let the writer take it away.”

“Each episode takes about six days to outline on the board. We do notecards for every scene with different colors for every character. On the last day, once the story has been broken, the writer who is running the room tells the story of that episode from the top—going through every scene, the beginning, end, and takeaway.”

“It’s a tedious process, but it’s kicking the tires of each episode, and we’re making sure that we’re not taking any short-cuts,” concluded Schulner.

In the first episode, the characters were not paired off, so each character had their own case to solve. Going forward, the writers decided to focus on two medical cases and worked on new pairings for the characters in the show. Now, they have more room for character stories, because of the procedural template.

Templates aside, the show is still trying to push some buttons. In the pilot, there was a clear-cut issue of race. “I thought, they’re never going to let me air this,” joked Schulner. “So, I’ll just write the most attention-grabbing scene I can, filled with conflict and hot-button issues, and they’re never going to air it. But, then they did.”

The hot-button issue, which involved not dating someone because of their race, is now the most common question Schulner receives. “We got this I-couldn’t-believe-it reaction from everyone. You take so long to write an engaging scene, but accomplished the same thing with a page-and-a-half of dialogue because it was such a hot-button issue.”

The screenwriter knew the scene, built around a conversation of discrimination, would enrage some and inspires others. Likewise, the writers thought about doing a storyline around undocumented kids in New York. The episode would have focused on a foster parent bringing in a child with an unknown medical history.

“But, we quickly realized that there was no way New Amsterdam was going to be able to solve this issue or offer a solution to these kids in America. We thought, ‘It wasn’t our show.’ We didn’t think we could help, so we put it on hold until we could come up with a better way to solve that question.”

For now, however, this seems to be the only limit. “We tackle gun violence in episode five. We go right into race in episode one. Nothing is off limits right now. The only criteria is that we have an innovative way of addressing the issue or offering a solution for it.”