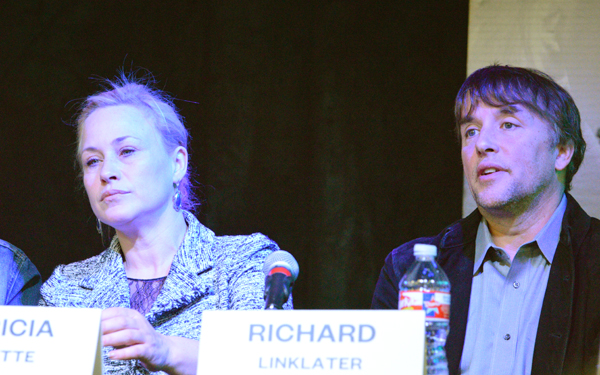 Texas attracted the world’s attention with Boyhood, the movie written and directed by Richard Linklater, after being nominated for six Academy Awards including best picture last February.

Today Linklater and one of the most recognizable faces from Boyhood, leading lady Patricia Arquette, have quickly become Texas spokespersons regarding the state of the industry.

Arquette won an Oscar for best supporting actress in her Boyhood role as a divorced, single parent working part-time while putting herself through college.

The two joined other “A list” Hollywood actors, directors and producers as panelists at a press conference inside Austin’s private Gibson Texas Showroom just hours prior to the Texas Film Awards.

“Community is what makes Texas a special place for creatives,” Campbell said. “It’s something like lightning in a bottle and we are going to capture it.”

Arquette who began her acting career by appearing in primarily alternative, low-budget independent films, talked about how movie financing has changed over the years.

“At the same time cable came in with a vengeance so we have like 500 channels with no content and it’s just a recycling of the same content and three different big movies from each studio and no one is able to get any money for anything else.”

“I’m a fourth generation actor. My great-grandparents were in Vaudeville, so the concept of entertaining the masses for 5 cents a ticket was always appealing to me.”

“With Netflix and all these different people who want original content now, I think the pendulum is swinging back to where people are now going to turn off their cable because there’s really nothing on,” she said.

Arquette said while portraying herself as a struggling mother in Boyhood she became a role model.

“One thing that was planned from the beginning was not to have a Hollywood concept,” she said.

“I mean I don’t want to be something that I’m gonna cry ‘bull sh*t’ at. I want to look like a real human being on Earth – and there’s nothing wrong with that.”

She said she loved the Boyhood project from the moment that Linklater told her about it. He kept the project real by shooting scenes on 35mm film with his cast once a year for one week over a span of 12 years.

IFC Films executive president Jonathan Sehring approved the film’s funding in the meantime. The risk paid off for both IFC and Linklater who both received their first Oscar nominations for best picture. The movie has earned more than $444 million since it opened at box offices nationwide.

“I’ve said this a million times, but I continue to say it a million times — you can’t have a contract that long in America. Even though it was (funded for) $4.4 million dollars, still any of us could have left,” she said.

“It was an incredible risk that will probably never be done in this system again. I mean some kid and his camera might make a movie over 12 years, but I don’t think most people would gamble money like that; so that was rare.”

She had wanted to work with the cast and crew long before Arquette accepted her Boyhood role.

“We were both parents; it just was (a story about) the beauty of life and the simplicity of life.”

Arquette feels a personal responsibility to help redefine a woman’s place in the world. She said she hopes that someday members of society will end their sexual objectification of women.

“It’s such a subconscious thing, this indoctrination that we do to our daughters; it’s constant. When you hear 11, 12, and 13 year-old girls judging themselves and their bodies and trying to think who they are supposed to be in the world,” she said.

“Or what’s of value and that they have to lead with their beauty or it’s demanded of them and expected of them. The more we have these conversations, the more we write about these things we are continuing that cycle. I just really wish we would get past that for our daughters.”

Her outspokenness has inspired fans. On stage at the 87th Academy Awards in February when she accepted her Oscar for best supporting actress in Boyhood, she demanded equal pay and equal rights for women in America.

At one point during Arquette’s speech, legendary actress Meryl Streep jumped out of her seat, to point her finger in the air and shout “yes, yes.”

“I thought about my character, this woman moving her kids from place to place and trying to put herself through school, and picking them up from school, doing homework and everything, and my own mom who never really had her own economic independence. She felt safe enough in her independence I think,” Arquette said.

“On a subconscious level I think women often put their kids first. I don’t know. My mom passed away from breast cancer. I don’t know if she put off going to the doctor because of whatever, for how many times, for how many years.”

“Latina women are the least likely to start their own businesses and less likely to put their kids through college, but we need more Latina businesses. We need to see that happening. The impact of not having the capacity to do that well has affected our economy and our society, for decades. So we have to do a radical switch and reset the balance.”

Arquette also talked about her efforts to promote equal pay for women, which she considers a non-partisan issue.

“I personally believe that Republican women should be paid the same as their counterparts. I don’t know what’s wrong with that,” she said.

“I am more radical than a Democrat or Left Wing. I’m more radical, but I also have a lot of friends who are Republicans and I see their point of view. I don’t always agree with them, but I don’t have an adversity to them as people. They could be my friends; I do respect them as human beings and other Americans, but I think this is really a non-partisan issue.”

Lorelei Linklater as Samantha and Ethan Hawke as Mason in Boyhood

Linklater talked about how he managed to keep Boyhood’s actors committed to the project for 12 years.

“Like any cult, it’s not usually contractual, but you can just sign on and drop out any time, but I was hoping it would mean more to them,” he said.

“Yes, people could drift away and some did, but for the most part — for people who had worked on it – it had this cumulative effect. They got more and more invested in it. So by the end, some said ‘hey, I’ve worked, eight or ten, or 12 years on this thing; I really care about it.’ It was cool.”

He said the actors worked about one week each year on set. Some staff put in one month every year and ultimately hundreds of people worked on the movie over the course of its dozen years.

“It was very special.”

Shooting the martini shot on the last day for Boyhood spent in Big Bend National Park, transcended reality, he said.

“It was the last shot of the movie and we were doing like a magic hour shot and we were kind of floating. It was amazing. I’ll never forget it. It was probably the most intense, most beautiful thing ever,” he said.

He said he wrote the script for the movie in segments over a 12-year period and often saw story potential everywhere around him.

“Endless. There are miles and miles of Texas — a lot of stories — it’s a big state. Stories are everywhere,” he said.

“It was kind of a year-to-year endeavor. It was designed to incorporate whatever was going on in the world at that moment.”

Linklater drew on his memories and recollections of news events that occurred in his own childhood.

“There are things in our culture that I thought (someone) would remember as a child. So we’re sort of filming a period piece, but we’re filming it in the present — which is both unique and low budget,” he said.

“So, I was always thinking ‘oh, presidential elections.’ I remember my first presidential election year was (Lyndon Baines) Johnson/(Barry) Goldwater (U.S. Presidential Election 1964.) I was like three or four years old at the time, but I still remember it, so I thought I wanted to put in the elections. We kind of got lucky in the ’08 elections – they were pretty vibrant, so we shot that before the elections. We thought oh that will be an interesting footnote, you know?”

“We were always making these little subtle choices and you always have to kind of live with it. You can’t go back and reshoot it, but it was always kind of curating what was going on and what could be included,” he said.

“Like the Harry Potter book give-away. I don’t remember that kind of thing when I was a kid, but that’s a pretty interesting phenomenon, so I thought kids that would age would remember that.”

He took an opportunity to shoot a scene during a Harry Potter book giveaway inside a retail bookstore. Because the seven novel fantasy book series written J.K. Rowling spanned from 1991 until 1998, Linklater hopes that the scene he included in his movie would elicit personal memories for Boyhood fans.

“Perhaps they’ll say ‘oh, we used to dress up and go at midnight.’ That could be 30 years from now and that would be a thing of the past, or it could go on with other books too. You just don’t know,” he said.

“Either way, it just works for the movie. You just don’t know, but it was a fun way to go through life all those years and to fit it all into the movie.”

Linklater also talked about how additional tax incentives for moviemakers might bring future productions to Texas.

The Texas Film Commission awarded about $95 million in grants over the last two-year period of the TMIIIP program created in 1971 by former Governor Preston Smith.

“Our figures are good, but then you need money in the pot, because that can run out between TV shows, movies, and video games,” he said.

“Other states have hundreds of millions. So it’s just economic development. I think we’ve proven ourselves over the years as far as spending that money wisely. They designed a very smart system.”

However, he said the state can always offer more incentives.

“We want more obviously,” he said. “So, I think that’s a big issue going forward, but the state of Texas always has to decide — do we want to be in the business or not and if we do, here’s what we need to do.”

For more about Boyhood, check out our interview with Richard Linklater: “I Want to Tell a Story”.