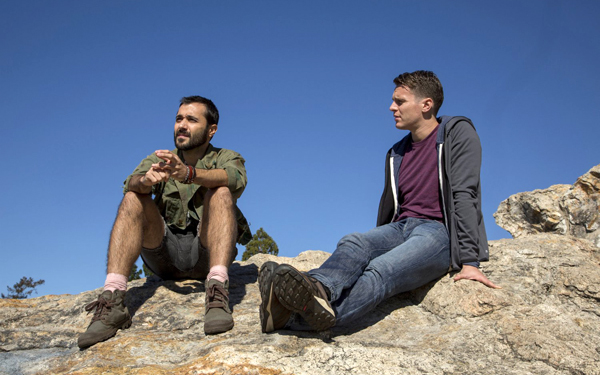 Defending Your Time to Write: Michael Lannan on Looking

Looking is an HBO dramedy about a group of gay friends who live in the San Francisco area. The show was created by Michael Lannan, based on his short film, Lorimer, directed by Andrew Haigh.

After two seasons, HBO simultaneously pulled the plug on the show but approved a one-time movie to serve as the series finale.

Creative Screenwriting spoke with Michael about defending your time to write, writing what scares you, and the importance of observation.

Michael Lannan on set of Looking: The Movie. Photo by Melissa Moseley – © 2016 – HBO

Let’s start with your background, and what led you into screenwriting.

I didn’t study writing and I didn’t go to film school, but I worked for a director named Allen Coulter (Hollywoodland, The Sopranos), who has done some great television and film.

While I was working for him, I got to be around a lot of really great writers, and sit in on meetings where some of the best people in the business were talking about writing.

I learned a lot there, so that was kind of my film school, but I never really thought that I was a writer, because a lot of the writers that I knew got up at noon and had a lot of certain habits that I considered writerly. I didn’t have that personality, so I figured I just wasn’t a writer.

During my time with Allen, I started taking notes on my own life and friends’ lives and funny stories that I had heard. Then, out of frustration and desperation to move forward in my career, I wrote a feature script using those notes.

I always wanted to be a director, but to do so, you have to have stories, so I just figured I would write stories for myself. That feature script and those notes are what would eventually become Looking.

Over the years, I just revisited that script and kept trying new things with it—adding new ideas.

What advice would you have for first-time television writers trying to get their first pilot read?

That’s a good question. I got two pieces of pieces of really good advice along the way—one from a friend who is a really good writer, and one from another who is a cinematographer.

The writer said, “At the end, it’s just you and your keyboard.” By that, he meant, “No one knows anything, really.”

People will offer you all types of opinions—even very successful people who seem to know what they are talking about and speak with certainty—but they don’t really know anything, either. They don’t know what the world that you are trying to communicate is. They will tell you if it fits into the marketplace or not, but if you have a burning passion for your world, then the only person that knows anything is you.

The other piece of advice is something that I struggled with for a long time, which was to “just finish it.”

I spent years just not finishing work, when a friend of mine said, “If you can just finish something, then you are miles ahead of most people. Most people just don’t finish their short films or their scripts, because they always pick up something else to distract themselves or just leave it three-quarters of the way through.”

Why do you think that is, and what do you find to be the most difficult step when it comes to writing?

For me, personally, it’s about habits. I am a very, very slow writer and for a long time, I didn’t properly schedule the time I needed to write. I needed to learn to shut the world out and make that time.

I didn’t defend that time.

Once I learned to block out that time and not look at my emails, to turn off my phone and not distract myself by getting a beer with friends, then I could make a lot more progress.

I’ve seen other writers who are clearly working on something so beautiful and so personal that it scares them, so they turn to another project or idea that fits the compatibility of the market place and what people are buying.

But that personal thing that they are so uncomfortable with is usually the most amazing thing that I have ever read of theirs. They’re just too close to it and it’s uncomfortable, so they can’t bring themselves to finish it. That’s another common problem, especially here in Los Angeles, when everyone is talking about who-sold-what, all the time.

Can you tell us about the notes you took, and how you shaped those notes into characters?

With the notes, it was different things. Sometimes, I would write down a line somebody said or maybe just a funny word that I heard that made me think about the way people talk to each other, and how my characters could talk to each other in a certain scenario. It could be that simple.

I heard this one story about an adventure in Central Park at a party. It didn’t end up in Looking, but it became the basis for a certain part of the pilot. It could be things on a larger scale, or simply words that make you laugh, and then those words ripple outward, so you can put them into context.

How did you then create story arcs for those characters, to make the first season of Looking?

Andrew Haigh (45 Years, Weekend) and I had ideas about the arcs for all of the characters, and we sat down, wrote them out, and took that document into our writer’s room to play with it and get everyone’s opinion.

We took it apart and then put it back together to break it up into episodes. The general shape of the seasons was somewhat like we intended, but then it began to grow, and get more specific, and we all tweaked it that way.

Have your thought processes changed since you have became more “writerly?”

So many things have changed!

I think that sometimes simplicity can really be the most effective tool. There were times on the show when we were trying to pack in the story, to make sure it moved properly, but in fact, it actually obscured other aspects of the show.

All shows have their own voice and their own rhythm, and ours wasn’t really a story-driven rhythm as much as it was a character-driven piece. For that kind of world, simplicity can often be the most effective way to talk about characters, problems, and conflicts.

Every show on cable today has its own world and its own logic, and the ability to explore your characters and stories within that logic is very important.

Did you find episodes simpler or more difficult than writing the movie version of Looking?

They each had their own difficulties. I think that the series is just such a collaborative process that it takes a lot of work to make sure it all fits together. We had a lot of great writers who really wrote their own episodes without much guidance from us. Everyone went away and came back with an episode. There was comedy in the voices and the rhythm of it all.

Jonathan Groff as Patrick and Frankie J. Alvarez as Agustín in Looking: The Movie. Photo by Melissa Moseley – © 2016 – HBO

Is there a favorite missing piece that you didn’t get to tell, but might wish to share with fans?

We had talked about something in the third season, where Patrick might have a new guy come into his life to challenge his ideas in another way, outside of the ways that Richie and Kevin had already challenged him. I was curious to see what that would have been, but we never went too far down that road into specifics.

I’m happy how we grew and how things ended in the movie.

There are a lot of romantic letdowns in the series. Would you say that the characters are still growing despite these plateaus?

I think so. We tried to wrap the film up in a way that wasn’t totally conclusive. I think that Patrick and Richie are going to give it a try, but that doesn’t mean that everything is going to be easy breezy from here on out.

There are a lot of complications and I think that all of the characters are somewhat like that. Eddie and Agustín are trying to figure out what their marriage will be, and that’s a whole new set of problems and issues. Doris is jumping into child rearing and God knows what that will be like.

Dom has become a successful businessman with all of his pressures, and he officially becomes the senior member of his gang. He still has issues about his age and his abilities, and those issues will continue to cause conflict within him.

My hope is that now that the show is over, people can still think about the characters’ lives beyond it, or at least the suggestion of life beyond.

I would just like to thank the fans and everyone that supported the show, and everyone who enjoyed the ride with us.

Looking is available now on DVD and Blu-ray by HBO Home Entertainment.