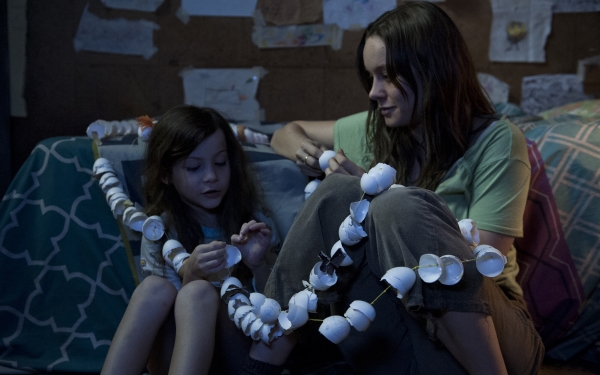 Confined to a windowless, 10-by-10-foot shed, a young woman lovingly raises the child she conceived with her rapist captor, in Room, a psychological thriller written by Irish novelist Emma Donoghue, who adapted the script from her same-named best-selling book. This simply-described premise turns out to be a boundless mystical journey, as Ma (Brie Larson) does everything in her power to normalize and beautify this tiny world for five-year-old Jack, played with astonishing authenticity by Jacob Tremblay (The Smurfs 2). When their captor Old Nick (Sean Bridgers) brings just enough food to keep his prisoners alive, Jack only sees a bounty, where nothing goes to waste—not even the broken egg shells he and Ma thread into a fantastic serpent creature for Jack to play with. Like a blind man who develops a heightened sense of smell, Jack and Ma’s static space only serves to strengthen their collective imagination. It has to.

Directed by Irish film and television helmer Lenny Abrahamson, Room also features one of the most nail-biting escape sequences ever committed to film. To say more is to divulge major spoilers, but any way you look at it, Room observes the intricacies of the mother/child connection, like no other film has.

Donoghue sat down with Creative Screenwriting, to tell us more.

Joan Allen as Nancy, William H. Macy as Robert, and Brie Larson as Ma in Room

What was it like seeing your novel Room blow up into a global phenomenon?

It was really sweet. It was my seventh novel and I’ve been a full-time writer since I’ve been 23, so I’ve been enjoying my career perfectly well, but to get the sweet smell of success in your forties? Bliss!

Was adapting the book into a screenplay a daunting task or an exciting exercise?

Well I wrote the script on spec, because although the book had already been written and sold, it hadn’t been published yet, so I thought “I’m going to write the screenplay now, when there’s nobody watching over my shoulder, telling me what to do or trying to convince me to let a more experienced screenwriter do it.” So I was in a private space, with no pressure, and it was full of pleasure.

Kudos for having the confidence to take such initiative.

About twenty years ago, I was hired by an Irish movie company to make a movie of my first book, and I now realize I should have told them it just didn’t have a strong enough story to bear a film, whereas with Room, for the first time ever in my career, I thought the story was strong enough to work on screen. It may be peculiar and it may have certain technical challenges, like the whole first half taking place in a room, but the plot had momentum and I could imagine a cinema audience watching this child and caring what happens to him.

What was your point of entry into the adaptation?

The very first thing I did was look for what had to go or be changed, and funnily enough, we ended up putting a few of these things back in afterwards. For instance, in the book, the boy has long hair, and you don’t really notice it, but on screen, I thought this little boy’s huge head of long hair would be distractingly androgynous, so I better give him short hair. But then the director Lenny Abramson was like, “Let’s go back to the long hair,” and since Lenny was such a veteran of film, he was confident about the film’s ability to include unusual elements, without alienating its audience.

Brie Larson as Ma and Jacob Tremblay as Jack in Room

How methodically did you consult your book as the blueprint for the screenplay?

I wasn’t totally attached to any one scene. It was all about figuring out how to tell the story in a way that suits cinema. For instance, in the first thirty pages of the book, the reader is involved in a kind of guessing game of figuring out exactly what’s going on, based on Jack’s childish prattle. He’ll make some little reference to Ma taking her pill, and the reader is thinking that Ma’s on “The Pill”, and wondering who she’s having sex with, so the reader is filling in all of those little gaps. But in a film, obviously the camera shows you that world, so I knew the story would have to move much faster. But the major components are roughly the same shape and proportion as they were in the book, so as adaptations go, this was a pretty faithful one.

One character you certainly couldn’t have excised was Old Nick. Why did you avoid describing his motivations and back story?

In the film and in the book, we tried to do exactly what Ma does, which is keep Old Nick at arm’s length, because we didn’t want to position him as some kind of fascinating psychopath rapist, with flashbacks to his traumatic childhood. We couldn’t care less about his childhood. The story puts Ma and Jack in the center, with Old Nick kept off to one side. But Sean Bridgers gives a very powerful performance with the short scenes he’s got.

There were small observations that really lent to the film’s charm, like when it gets cold and Jack sees his breath and says, “Look, Ma, I’m a dragon!” Did these nuances come straight from your id?

They came straight from my son, who was four-and-a-half when I got the idea for the book, and I stole the words out of his mouth. I used to watch him play, and take notes on what he was saying and how he would talk to his truck. I’m embarrassed how much I owe to him.

Brie Larson as Ma and Jacob Tremblay as Jack in Room

Is there a universality to the parent-child experience portrayed in the book – despite the extreme circumstances Jack and Ma face?

Absolutely. I think this is a parenting story – not a crime story. The crime premise is merely a way of shining this extreme spotlight on the experience of raising a small child, which is otherwise hard to capture in all its dramatic glory, because we’re all so used to seeing kids around, and a lot of us have kids in our own lives, so it’s all very ordinary. But the premise of a women giving birth in a locked room, allows us to see how life-altering and what a huge responsibility it is when you’re raising a child, allowing us to ask, “What is this astonishing little magic circle of the parent-child bond, which one minute is full of fun and private alchemy and the next minute is ‘get me out of here, I’m trapped?’” So the locked room for me is a useful metaphor, but one thing I like about the way Lenny’s done it is that it also really works as a very naturalistic film about a kidnap victim as well. It just doesn’t wear its allegorical side very heavily.

There comes a time when Ma has to talk to Jack more truthfully and objectively, in order to describe the escape plan. Tell me about Ma’s shift away from fantasy and pretense, in her conversations with Jack.

She’s doing what she calls “unlying”. As parents, you always have to lie to your kids to deal with their limited understanding. When they’re two years old, and you’re dropping them off with their grandmother for three days, you simplify things and say, “I’ll see you later!” You don’t say it’s going to be three long days. Whether it’s Santa Claus or the Easter Bunny or the Tooth Fairy, we tell them these simplified versions of things in a loving spirit, then you find yourself going, “Okay, the Tooth Fairy didn’t come because there is no Tooth Fairy.” So Ma was just doing a more extreme version of what all parents do.