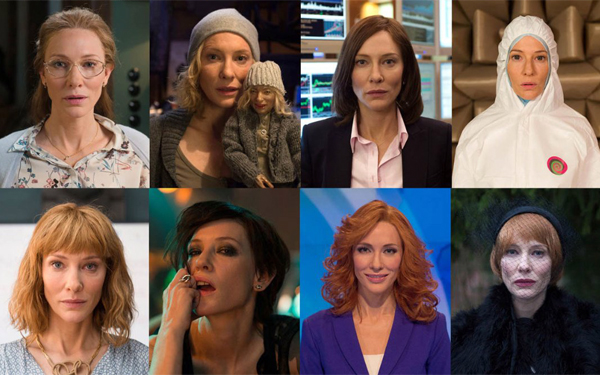 It’s difficult to describe the film, Manifesto. In a sense, it is simply Cate Blanchett playing thirteen very different characters, each of which deliver a famous “manifesto”. But the whole is greater than its parts, and the film avoids being self-indulgent or even overly academic.

Beyond Blanchett’s remarkable performances, the success of Manifesto comes from writer-director Julian Rosefeldt. The German artist and filmmaker appears to have rediscovered these texts as he toyed with, reinvented, turned inside out, and delivered them as something new and noteworthy.

Creative Screenwriting spoke with Rosefeldt about the inspiration behind Manifesto, characters as messengers of thought, and finding what is original in yourself.

This interview is also available as a podcast! Listen to it here.

What made you originally want to create Manifesto?

Two things. One was my meeting with Cate years before. We met in an exhibition of mine in Berlin, in 2010, and we had this idea to do something together. But I didn’t know what that could be.

The only thing I knew was that I wanted was for her to be many people at once, in one project. So I had that idea in the back of my mind.

Then I was working on another project of mine called Deep Gold. It’s an homage to Luis Buñuel’s The Golden Age, his second film, the Surrealist masterpiece. I found two manifestos from a French futurist, a woman and artist called Valentine de Saint-Point, and that was basically the starting point with Manifesto.

It seems like someone writing a manifesto is heavily for or against something. Did you find some comparisons between the many works?

Definitely. The common thing is that they all want to tear something down that they are fed up with to, create something fresh and new. Sometimes they want to invent a new world, or it’s very utopian, or almost arrogant. But every one was very refreshing.

What they all have in common is that they are all insecure. That might surprise you because they’re so loud and angry.

But when you consider the time and the life of the writers, or artists, you see that they [the manifestos] are mostly written in their early twenties or even the late teenage years of their lives.

It’s the moment you are getting out of your parents’ house and moving, so you are actually very insecure. Because you are fragile and insecure, you yell out loudly your opinions. Whether you’re in a punk band or writing manifestos, it’s a similar expression of youth or rebel spirit at that age.

How did you go about marrying the characters with the manifesto? There seems to be some purposeful juxtaposition.

Sometimes with the analogy of the original thought of the text. For example, the Futurists, as you know, have an inclination for speed and technology, but there’s also this uncontrollable element in them.

I was looking for something that expresses this fascination of speed, but also present danger at the same time. So I came up with the idea for the stock exchange world, where people deal with a lot of accountability, and they’re all coke addicts or on drugs like speed. But they’re also fascinated with this incredible, invisible velocity of the whole thing.

For instance, the pop art scene where the conservative family is saying grace at the Sunday lunch. Because it is so contradictive, the viewer can really enjoy the text.

Different methods with the same idea behind it: You’re freeing all of these texts from the “dust of art history”, and then coming back to the pure aspects of the poetic components of the text, so you can forget about the visual work that these artists are now famous for. Just reading the text as pure thought and pure poetry.

When you’re watching the film, it’s almost like a lesson on acting. There’s certain pacing and rhetoric from news anchors, the teacher’s guidance, the family prayer—did you work on these characters with Cate Blanchett?

First there were the manifesto collages, and then I started collecting ideas for scenes where somebody delivers a monologue. Maybe a woman, but sometimes a man, and there is one homeless man in the project.

In that process, I collaborated with Cate. So in that phase, she also contributed ideas and we discussed it, as far as what could be interesting as scenes for monologues.

Then it was all about merging texts and characters. Again, Cate was very important because they’re not only characters, they’re messengers of certain thoughts, like archetypes. They’re vessels for ideas. They’re exaggerated, almost clichés of characters.

Some are believable, I would say, like the teacher or the single mother. But others are very exaggerated, like the choreographer, who is a cliché of many, many Russian choreographers that you have seen in different movies. When we started production, we worked with a choreographer in Berlin who did Vegas-style shows, and she was exactly the same! Just like the one we had imagined.

When the characters look into the camera, it’s reminiscent of Jonathan Demme’s (Silence of the Lambs, Philadelphia) fourth wall breaks. Is that meant to mimic the theatre, or are there cinematic influences behind these scenes?

The theatre is definitely important to me. I used to produce works for the theatre as well, and I saw a lot of theatre directors at work during that time. I learned a lot from them.

In many of my works, you’ll find hidden love decorations to film history. For example, in the opening scene of Manifesto, there are old ladies firing rockets into the sky. This is an homage to Michaelangelo Antonioni’s film La Notte, where she’s cycling out of the town to run away from the constraints of her marriage and sees three teenagers in the field firing rockets in the sky. For me, this is a beautiful symbol of her possible freedom.

They are little things that you don’t need to know, but there’s a lot of love for filmmakers I admire. There’s also the floating monolith from 2001 in there (referring to Kubrick’s film), that also refers to Black Square of Kazimir Malevich, who wrote the Suprematist Manifesto.

What was the time frame like on the script and the film?

Absurd, because we had twelve shooting days on the entire project, which was eleven with Cate and one without her.

On the other hand, it was very, very long time working alone on the collages of these manifestos.

So a very long period working on the text, far too short a period for shooting, and then a very long, post-production process.

Was there a certain manifesto that you really connected with?

I’m often asked if some of them stick with me more than others, but there are dozens of them in Manifesto, and I kind of love them all for their utopian spirit and thinking, whether or not I agree or disagree with their content.

But certain discoveries come from the very poetic ones. The very last one where you see the children in slow motion and the playground at the school. That one [from architect-artist Lebbeus Woods] is very short, like haiku short, but that one spoke a lot to me.

If you were to write your own manifesto, what would you write about?

When I was twenty-something, I actually wrote a manifesto [laughs], but that’s all rubbish of course. As I said, you write a manifesto when you’re young and insecure! I wouldn’t want that to be read by anybody now, but it was probably relevant at that time for me.

Finally, do you have any advice for novice writers or filmmakers?

What I would always teach young people, engaging in whatever form, is to forget about existing recipes or which boxes the industry is putting their products into, like long-form, short-form, documentary—those are unbearable limitations.

I would always advise everybody to listen deep inside yourself, to try and work on what’s original you. The problem is that it’s very difficult to find, because what’s original in you is likely the one thing that is too easy to do. That’s why we think it’s not special.

We admire others for what they are good at, but we don’t admire ourselves. Ask a very good musician…He or she would never appreciate a compliment: to them it’s completely normal. They just have the skills.

Find out if you have a very specific look about what you’re doing, and just work on that. Don’t follow any kind of existing recipe. Forget about “How to create unforgettable characters” or all those guides and books on film. I would not think too much about that. That would be my advice.