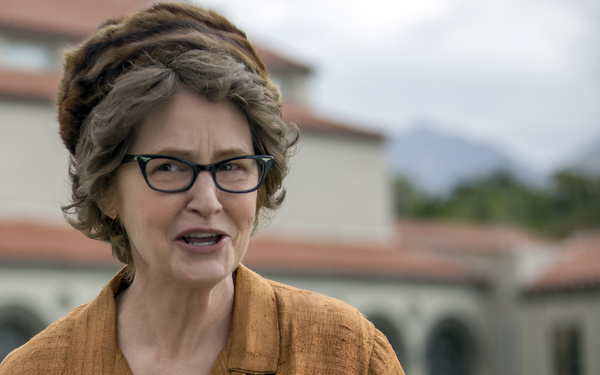 “Polarizing, inspiring, strong and difficult.” The Most Hated Woman in America

Netflix’s original biopic The Most Hated Woman in America is about the life and death of atheist crusader Madalyn Murray O’Hair.

O’Hair, played by Melissa Leo, founded the American Atheists movement, and led the controversial legal battle which culminated in the Supreme Court’s ban on official Bible reading in American public schools in 1963. This, together with regular appearances on television talk shows where she delivered foul-mouthed diatribes against her opponents, led to her being referred to as “The most hated woman in America”.

Writer-director Tommy O’Haver and his co-writer Irene Turner researched their screenplay from primary sources to recreate this much-publicized true story. Creative Screenwriting spoke with them about portraying the essence of the truth, flashbacks, and getting the death right.

Which of you came up with the idea for the screenplay?

Tommy O’Haver: It actually was neither of us!

Our producers, Elizabeth Banks and Max Handelman, had seen our previous film, An American Crime, which I directed and Irene and I co-wrote, and they liked it a lot. We sat down with them and they pitched us a movie about Madalyn Murray O’Hair. So we jumped into the research and thought the story was incredible. I was amazed that it hadn’t been told in a film yet, and we were all in.

Irene Turner: She was just such a polarizing, inspiring, strong and difficult woman. And Tommy and I said “we definitely must do this.”

How did you research the story?

Tommy: Luckily there’s a ton of articles and writings on Madalyn and television appearances. There’s just so much material out there on her and her family and life. So that’s where it started.

Tommy: Sometimes the stories were contradictory in fact.

Irene: For example, her relationship with her son, Bill Murray Jr. In newspaper articles and interviews he has talked about it from one perspective, while she spoke about it from a different perspective. That’s the biggest thing, trying to figure out the truth of that relationship from what they both said about each other.

Tommy: And you have to assume that probably the truth was somewhere in the middle; at least that’s what we extrapolated.

Melissa Leo as Madalyn Murray O’Hair and Vincent Kartheiser as Bill Jr. in The Most Hated Woman in America

What of her other relationships?

Irene: But she was definitely closer to her mother, and also her mother lived longer. So there was a definite tie there that she did not have with her father.

Tommy: A lot of people, in fact even their son Bill Jr., said that Madalyn’s biggest issue wasn’t necessarily with God, it was with men in general. She had a lot of bad relationships with men. There’s an allusion to that in the script, with a brief quote from Madalyn. I’m glad that comes through.

Madalyn’s granddaughter, Robin Eileen Murray, disappeared in 1995 with Madalyn. How did you create her character when so little is known about her?

Tommy: It’s interesting, because Melissa Leo as Madalyn is obviously the centerpiece of the movie, but it’s very much an ensemble. There are so many characters around her that are interesting.

On the page a lot of those characters maybe didn’t feel underwritten per se, but they didn’t sort of jump out as important as they are. So it was amazing bringing actors into the mix and then having them give those characters flesh.

Juno Temple doesn’t have a great deal of dialogue. But just her presence brings this force to this character who is very integral to the entire story.

Could the same be said of Jon Garth Murray?

Tommy: It was a very similar situation to Robin, where on the page he only had a few lines, and he was always being berated by his mother. It almost read as comic relief on the page.

Then when I got Michael Chernus involved, he came in and seemed to inhabit the role. He did a lot of research. I sent him videos and articles, and things like that; I did this with everyone. Then he came back to me and said ‘I think he’s kind of a sad person and I really feel for this guy.’

So a character that maybe felt slightly one-dimensional in a quick read becomes a real person through the magic of production.

Dichotomy made Madalyn a compelling character—unlikeable, but interesting. How did you go about fictionalizing her?

Tommy: A lot of her lines are direct quotes from Madalyn herself. Some of the best lines are things she actually said.

In terms of process, it was about letting the actor discover their version of Madalyn Murray O’Hair. I provided Melissa Leo with a lot of research, and we discussed the character several times, but she sort of fell in love with her, and said ‘I’m going to do my version of Madalyn Murray O’Hair which I would hope if she were alive, she would respect.’

I love Madalyn. I’m glad she wasn’t my mother, but she was a fighter and an iconoclast and someone who just never gave up. Some of her anger at the establishment I totally get. The idea is you bring as much truth as you can, and as you work with the actors they bring another layer. They’re the ones who have to take the words and to interpret them. You just try and keep getting at the truth as much as you can.

In the film, Madalyn and her family are kidnapped by David Roland Waters, Gary Karr and Danny Fry. Rory Cochrane portrays Gary Karr as an unstable criminal. How did you go about writing Karr’s character?

Tommy: Gary Karr really was a wild card. He was unpredictable; he was tough and scary.

Irene: It was nice to able to write a character that volatile.

Tommy: He’s kind of a contrast to David Waters, who’s all about control.

Tell me about how you created Danny Fry.

Irene: The tragic thing about Danny is he seems to be a grafter, just a small time con man who tried to get into some schemes that he screwed up. He had a daughter that he cared about that he was trying to get back to.

Clearly the whole kidnapping was way above his pay grade in terms of being a criminal. It was great as a screenwriter to have this contrasting third guy who really kind of wishes he hadn’t gotten himself into this, and doesn’t know how to get out of it.

He’s actually not that hardened and is much newer to crime and much more vulnerable.

The flashbacks in the film really provide so much backstory about Madalyn and Waters’ relationship. How did you write the Christmas party scene, when Madalyn tells her guests about Waters’ criminal past?

Tommy: That was a written and more physical representation of what actually happened. She used her newsletter to mar his name, and he was furious. She wrote some diatribe about him in the American Atheists Newsletter that totally embarrassed and infuriated him, and set him on this path of revenge.

Irene: He had also stolen money from her.

Tommy: Yes, it was in an earlier draft. But it was very complicated, and for simplification purposes, we ended up dropping that subplot.

Irene: But she had embarrassed him. So we took the essence of that, which was the embarrassment in a public setting.

What was the most challenging aspect of writing this story?

Irene: Getting her death right. What happens when someone who has spent her whole time as an atheist faces death? That seemed really important to me. It’s a small thing, but it’s also a huge thing. It’s like sticking the landing in Olympic gymnastics. You better get that right.

There were other things that were probably harder to discover, but that’s the one that just felt the most important, and in that sense the most difficult.

And what was the easiest part?

Tommy: I was going to say the exact same thing. Finding great lines from Madalyn. Because she was an incredibly intelligent, witty person, and she had a lot of great lines.

Tommy: It was only difficult in deciding which ones to use and which ones not to use.

It surprised me in the movie when Madalyn says “In the end, family is everything.” Did she want her family around her to control them, or were they meaningful to her?

Irene: She loved her kids and her grandchild so much. She just had so many of her own issues. If you read her diary you see that she was so vulnerable. She cared so much that they would succeed and be happy. She just was her own worst enemy.

The Most Hated Woman in America is available now on Netflix.

Featured image: Melissa Leo as Madalyn Murray O’Hair in The Most Hated Woman in America.