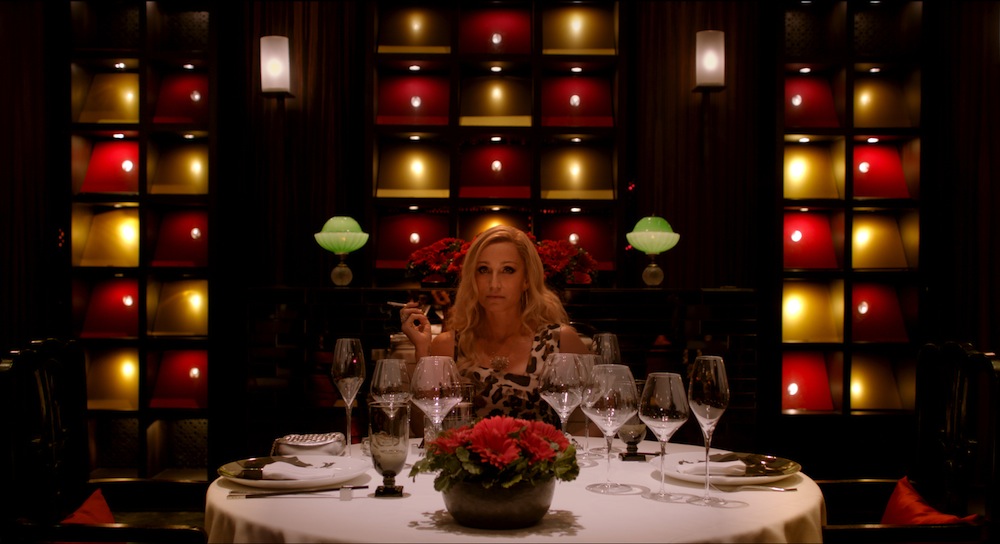 Written and directed by Refn for The Weinstein Company subsidiary, Radius TWC, Only God Forgives is part martial-arts revenge saga, part religious allegory and part Oedipal fairy-tale. It reunites Refn with Ryan Gosling, whom Refn formerly directed as the stoic stuntman-turned-getaway driver in 2011’s Drive. This time around, Gosling plays Julian, a reluctant drug-smuggler and Muay Thai fight club promoter, who must avenge his brother’s death at the behest of his Draconian mother, played by a maniacally bold-and-blond Kristin Scott Thomas.

Set and shot amid the gritty Bangkok underworld, Refn says he drew heavy inspiration from American and Spaghetti Westerns, explaining: “I like the idea of two men in a town, where one of them has to leave, or someone’s going to die.” And in keeping with the grand tradition of the genre, Only God Forgives teems with tense standoffs, penetrative stare-downs and drawn-out moments of meditative silence. In fact, Only God Forgives has such little dialogue, Gosling’s aloof character from Drive seems verbose by comparison.

Despite its sudden bursts of violence, most of the film’s 90-minute running time comprises boozy lounge singers, come-hither sex workers behind glass, and wide shots of stray dogs traversing Bangkok’s menacing nighttime streets. The eerie Noir effect was aided by the authentic sex club locations in which the crew frequently filmed, in order to capitalize on their unique visual aesthetic. “It was hot, and once you turned off the A.C. and closed the windows, the smell of human pleasure was intoxicating,” said Refn.

Kristin Scott Thomas as Crystal in Only God Forgives

Coupled with composer Cliff Martine’s Thai-influenced score that at one point surprises us with a Nosferatu-inspired pipe organ music cue during a key fight scene, Refn’s sultry, dreamlike vision at times verges on David Lynch-esque abstraction. And while martial arts enthusiasts hoping for wall-to-wall combat are apt to become restless by the elongated interludes between fight sequences, quiet and deliberate build-ups are precisely what Refn had in mind.

“Silence is the loudest sound,” Refn explained to the festival crowd. “It forces us to become more observant of what’s around us. And speed is actually much more effective, the slower it is. This is similar to the way we experience museums, where staring at an object for a long stretch of time starts to alter its existence.”

Creative Screenwriting sat down with Refn, to discuss his method for constructing plotlines, Refn’s determination to beat the Hollywood machine against all odds, and the only truly legitimate use of guns in cinematic storytelling.

ANDREW BLOOMENTHAL: Do you enjoy the Q&A aspect of the festival circuit? Last night, someone asked what advice you’d give an aspiring director, and there was a collective groan in the room.

NICOLAS WINDING REFN: It could have been me asking that question at one time, and I respect that. But rather than saying all the obvious things that one can say when someone asks “what advice would you give me?” or “how do you stay clear to your vision?”, I told a story going back when I was 25 and I had ice cream with Elia Kazan in Stockholm. And I asked him, “What advice would you give a young filmmaker?” And he said, “My advice to you, is to do it your way.” And I thought, “That captures everything. Thank you very much Mr. Kazan, you may die now.” And so when somebody asks me for advice, I feel like I can only repeat what Elia Kazan told me.

BLOOMENTHAL: Only God Forgives has a number of fight scenes. When writing these sequences, do you articulate and every punch, jab, block and kick?

REFN: No. Because I always find reading and writing fight scenes to be excruciatingly boring. Sometimes you have to write something for the financiers, because they won’t accept just: “They fight. Period.” In these cases, I usually commandeer someone to write a long, savvy-wavvy Batman “wang-bang” concept, then disregard it. And then later, when I’m on set with the stunt fighter coordinator or with the actors, we say “What can we do here?” and really take it from there.

BLOOMENTHAL: There were a lot of visceral death scenes, and some of the kills were by blade, while some of them were by bullet. Were there conscious decisions to use a sword versus a gun in each death scene?

REFN: A gun is always the most boring weapon to kill anyone with. It’s so removed. Swords, hands and knives are much more primal. They’re so much more emotional. With guns, it’s reserved; it’s removed; it’s mechanical, it’s disconnected. Guns are only good when you’re killing zombies. Killing zombies with a gun are great, because that’s all you do. Shoot their heads off.

BLOOMENTHAL: Talk about the challenges of writing such a moody, atmospheric narrative, using sparse dialogue to tell the story.

REFN: I have written many different kinds of scripts, and I’ve also worked from someone else’s source material. With Drive, which was based on James Sallis’s book, I collaborated with a wonderful writer called Hossein Amini to adapt that material. Somebody asked me if Drive affected Only God Forgives, and I said, “yes and no,” because I was going to make Only God Forgives before Drive. It was financed and ready to go, but at that time I decided to go to Hollywood to do The Dying of the Light, which was a Paul Schrader script, with Harrison Ford attached. But that did not happen, and I was like, “Fucking hell, I’m such a moron. Why do I even believe in this bullshit?” And then Drive accidentally came about, as a pleasant surprise. And I was determined not to leave this city without making a movie. I wasn’t going to be another European casualty in Hollywood.

So I made Drive, with great source material, and I was able to make the movie I wanted to make, taking a lot of artistic liberties from what the source material could offer me. So when I went back to Only God Forgives, which I prepped at the same time I was doing Drive, I decided to make a movie that was pure and simple. One of my favorite things in storytelling is structure. The way that I work is that I write things on index cards—scenes, ideas, concepts—I place them on the table and I slowly begin to see some kind of story emerge within it. It’s telling me something. And I play around with the structure until it starts to click. And in Only God Forgives, I wanted to create a waterfall of emotions.

BLOOMENTHAL: I have to ask the inspiration for one of the most disturbing moments—the penetration scene, when Julian sticks his hand into his mother’s stomach. Can you tell me about the light bulb moment when you decided you were going to incorporate this?

REFN: Well, I shoot my films in chronological order, so I constantly see how the movie evolves. I work with the actors and the other creative people, like the cameraman or the editor I use. Making a film is like carrying an infant around, and helping it grow and making sure it doesn’t falter. It means not being afraid of the twists and turns. I always know kind of where I want to go, but I don’t really know how I’m going to get there, and that’s what excites me.

A lot of times I would ask the actors where they see themselves heading in the movie. Especially for Julian, who was on this sleepwalker’s journey of slow movement and silence, like he’s in the land of the death; like under he’s under water. He’s in purgatory. And Ryan came to me and said, “I feel I need to stick my hand in my mother. I was like, “Then we will go there.”  I knew Julian’s hand was going to get cut off, so his idea made sense for the story, as a metaphor. And that’s emblematic of what great collaboration is like when you work with people who are going on the same emotional journey as you. With K.S.T. [Kristin Scott Thomas], when she committed to the movie, she said, “I need to change. I need to do something different”, and I said, “What would you like to do? What would you like to look like?” And she sent me some pictures of herself from a photo shoot, wearing a long blond wig, and she said “I want to look like this. I want to be Donatella Versace,” and I replied: “Then Donatella Versace you will be.”

Anjelica Huston as Lilly Dillon in The Grifters

BLOOMENTHAL: There was an echo of the Lilly Dillon character from The Grifters in my mind. Did that ever occur to you? Has anyone else made that connection?

REFN: Not yet, but I like that character very much, so it’s very flattering.

BLOOMENTHAL: This leads me to the Oedipal dynamic between Ryan Gosling’s character Julian, and his mother Crystal, played by Kristin Scott Thomas. In your mind, how far did that relationship go, sexually? Were they ever fucking? And was Crystal ever fucking her other son Billy, as well?

Kristin Scott Thomas as Crystal in Only God Forgives

REFN: Clearly there is a history of sexual abuse. But what makes it twisted, is that sexual abuse by a mother of her sons is very different from the sexual abuse from a father to his children, because the male dominance of a sexual relationship is courted and wooed by one’s mother. It’s very complicated. So you can say that one part of Julian wants to free himself from his mother—from the spell of her. You can say he’s chained to the womb of his mother. And he’s willing to let his hands be sacrificed for that. At the same time, he wants to crawl back into his mother. He wants to have sex with her and return to the womb, because his mother said to him, “When I was pregnant with you, you were different and I was told I going to terminate you, but I couldn’t.” And that love—that unconditional love—is what he wants to return to. At the same time it’s a nihilistic destruction of where he came from.