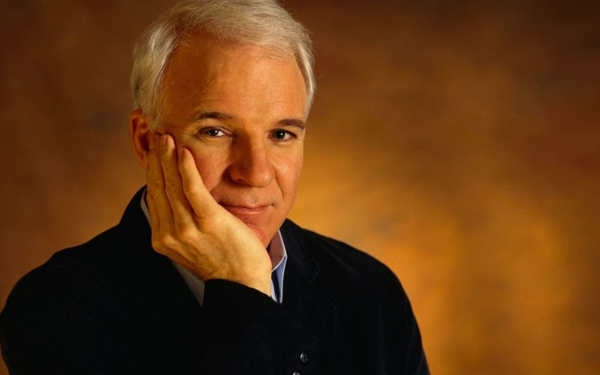 “No art comes from the conscious mind.” Steve Martin

There is something wonderful about the notion of being able to trace the entire essence of who you are to a single influence. For Steve Martin, the moment of his creation happened when he took a teenager’s job in the Magic Shop at Disneyland and met a man who made animals out of balloons.

“Wally Bogue was an entertainer at Disneyland that I used to watch. He was a very funny, likable guy, and I thought that’s what I want to be—a funny, likable guy. Well, I got funny…” and funny led him on a circuitous route to writing, and writing enabled him to create stories imbued with such charm and wit that he is known to be one of the most likable men in the entertainment industry.

Being a philosophy major doesn’t normally lend itself to anything as mundane as marketable skills, so Martin found his way into stand-up comedy. There he had “this horrible revelation that if I was going to be successful as a comedian, I’d have to write everything myself. Otherwise, it was going to be derivative.”

He began, as most comedians do, by writing down funny things that happened to him throughout the day. “In college, I wrote some essays that eventually became a book called Cruel Shoes. This little book of essays became my entrée into writing for television.”

Writing jokes for television enabled Martin to learn his craft “because it’s all about the bare bones of something. The way a joke’s structured, it can’t be too elaborate.” After a couple of years of writing for television, “I decided I was going nowhere and quit. I went on to do my comedy act and that became successful. Then I started writing screenplays. I co-wrote The Jerk, which was based on a lot of material that was already in my act.”

Steve Martin as Navin in The Jerk

As Martin’s career expanded, so did his creative options. He envisioned a project that would blend classic literature and romantic comedy. “With Roxanne, I was searching for a screenwriter to write it because I didn’t feel up to it. I searched and searched and nobody wanted to do it so I thought, well, maybe I’ll try. I learned a lot from it. I did about forty drafts of this thing.

I started by copying Cyrano de Bergerac, and eventually it migrated into something that was Roxanne.”

In 1991, he wrote and starred in L.A. Story, one of the few American films to successfully venture into the literary conceit of magical realism. As the adventures of a funny and likeable weatherman named Harris K. Telemacher unfold amidst the insane and inane cacophony of Southern California, viewers were led to wonder how much of what they were watching was autobiographical.

Indeed, the parallels were striking—right up to the point where the movie’s romantic interest became the real-life Mrs. Martin. In a most unusual way, this film established him as a new kind of auteur—the writer who puts his imprint on the film as the true author by performing the character he has created on the page.

Martin’s next exploration was an original stage play that drew from his philosophical roots—Picasso at Le Pain Agile—enabling us to eavesdrop on an imagined Socratic dialogue between Picasso and Albert Einstein. Excited by the expansive opportunities of writing for the stage, Martin ventured into yet another format for his next work, the novella.

This was Shop Girl, later to be adapted into a film by Martin himself, which tells the story of the relationship between Ray Porter, a wealthy older man, and a delicate young artist, Mirabelle, who sells gloves at Nieman-Marcus.

It has been suggested that there is a sense of loneliness weaving through all of Martin’s writing, yet a more accurate term might be longing. Where loneliness implies a sadness at being alone, Martin’s writing enables the viewer to accept characters who have created a comfort zone around their solitude, yearning for true companionship and love with the earnest hope that it will eventually arrive.

The real power of Martin’s writing comes from the fine detail that he devotes to moments and the emotions that envelope them. “I think everything that is not political—that is personal—happens in moments. It’s the moments that change everything—the look on a person’s face, the gesture.”

There is one particular passage in Shop Girl that seems to define his entire technique: “It’s not the big moments that really affect you—it’s the upturned syllable at the end of a word that can kill you.”

Martin believes that the ultimate power of writing comes from accessing the artistry inside. Invoking David Mamet’s theories on acting, Martin explains: “No art comes from the conscious mind. You always want to challenge that, to quibble with it, but—I so believe it—the conscious mind is about structure and editing and the subconscious mind is solving all the creative problems.”

Where does this inner artistry come from? “I think you have to cultivate it,” he explains. “First you have to trust it and trust that it will come. It didn’t happen to me for forty years, but…one thing is, you have to have something to say. That’s why I never wrote what’s called seriously until later—because I didn’t think I had anything to say.”

Given that he has danced among a variety of formats from essay to screen play to stage play to novella, Martin has discovered that it serves him best to let the story guide him to where it belongs.

When Martin is writing prose he says, “It’s almost like a crashing wave. It’s in the ocean and it’s nothing, but then as it approaches the shore, it’s rising out of the water! It’s just this momentum you feel you’re heading toward—that there are problems to be solved. In writing Shop Girl, I actually felt that I didn’t know what I was going to write, and yet it felt like it was taking shape inside my head—as if there is this black hole where everything just filters through your consciousness and it takes shape.”

On the other hand, he believes, “Screenplays are more scientific—they really do need a beginning, middle, and end; they really have to be concise. In terms of comic screenplays—for example Bowfinger—I visualized three or four funny scenes and I thought, I know what I want. I want three comic scenes in the movie that are funny because they have been set up, and I want one big comic scene at the end. And that’s the way I structured the screenplay.”

Perhaps the best way to describe Steve Martin’s agility with the written word is to note a playful romp that comprises approximately thirty seconds of a BBC documentary about the man.

The scene exists in one shot—a seemingly endless field of banana peels with Martin at the farthest end. Suddenly, he bursts into a joyful dance and maneuvers around the banana peels—without ever slipping. It serves as a metaphor for the playful effortlessness of his writing. With sincere humility, Martin suggests, “Everything I do starts with ineptness—and I have a lot of beginner’s luck—because you don’t know the rules yet. So what comes out is more precarious, more crazy, less normal, and sometimes it just works.”

Steve Martin as Robert K. Bowfinger and Eddie Murphy as Ramsey in Bowfinger

Although he goes to great lengths to refine the details of his writing, he insists: “I don’t feel like a perfectionist, but that’s the great difference between a screenplay and a novel. In a screenplay, the actors go in in the morning and say, ‘What if I said don’t go instead of why not stay?’ and I say, ‘Yeah, okay, I don’t care, whatever.’

In a play or a novel, everything matters—every sentence, every verb, every word—to me…I think, to the author—to know exactly why everything is there. It doesn’t mean you plan it out ahead of time. It means it came from a genuine place when you were writing it and it’s followed compellingly from the previous thing.”

Although he is famous for his extensive art collection, Martin claims that if he were given a full palette of colors he wouldn’t know what to paint. “I have no idea—it’s like a blank. It’s the one area I have absolutely no skill in. But I’d love the life of a painter—a master in big airy rooms, hefting paintings around and painting and meeting girls… I mean just the idea of saying, ‘All right, once you’ve got your clothes down… Great!’”

He once wrote an aborted essay for The New Yorker, called “Steve Martin, Nude Photographer.” It began with the sentence, “First, I’ll need a camera.”

This article was first published in Creative Screenwriting Volume 9, #5, 2002.

Catherine is the former Associate Publisher of the print version of <i>Creative Screenwriting</i> magazine.