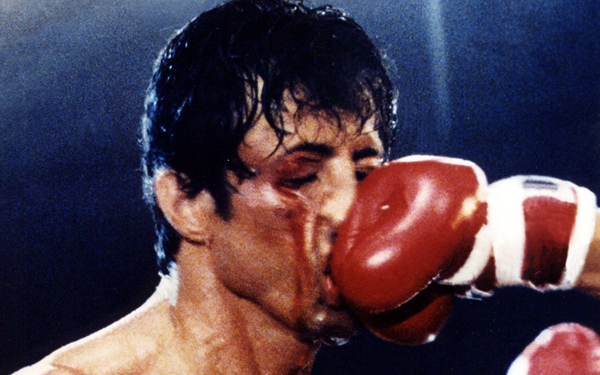 Near the end of Richard Wenk’s screenplay for 16 Blocks (which became a rather entertaining and underrated film in 2006), the protagonist’s sister, a nurse, unloads a little diatribe about her brother, a washed-up cop who is on the run protecting a witness being hunted by a corrupt police force:

I had the police grilling me for an hour at the hospital.

What did you tell them?

That we’ve barely spoken in two years. That you were a

anymore. About anything or anyone.

I told them the truth.

Taken out of context, this dialogue might seem like the worst kind of on-the-nose material there is. The sort of billboarded information we are warned about when we’re just starting out as writers. The kind we train ourselves to stay vigilant about never, ever, ever succumbing to.

But, as screenwriters, and especially screenwriters of drama (comedy has a lot more leeway for the in-your-face approach) we need to have a dialogue about the term “on-the-nose,” and when coming right out and saying it might, actually, be just what a screenplay needs.

We go to movies for heightened emotions. We want the people on screen to feel for us, and guide us through a psychological landscape that resembles our own enough for us to become invested in the storytelling. Indeed, movies are a visual medium, and the “show don’t tell” maxim is a good rule of thumb. But if we didn’t allow our dialogue to lay it right out there sometimes, to simply ask an audience to take in some all-important facts (again, emotional facts, never just exposition), then we could be depriving not only the eventual viewers of our work, but also our characters, of a much-needed measure of understanding.

Let’s look again at the contextualized reading of the 16 Blocks snippet. Jack, the cop played by Bruce Willis in the film, has been virtually dead inside for the entire story. So far, his outward actions have betrayed his cynicism, alcoholism and hopelessness about life in general. Now, as the story concludes and we meet his blood relative (who has remained an off-screen presence up to this point), at last we get the full rundown on exactly the man we have been spending our story with. Diane lays it out beautifully in just the way we need to hear it, and just at the right time. You bet it’s on-the-nose. And it works.

So, then, letting a protagonist blatantly state what they are feeling is just awful, on-the-nose writing, correct?

Not always. Here is a brief exchange from the excellent 2009 film Up in the Air written by Jason Reitman and Sheldon Turner, based on the novel by Walter Kim. Ryan Bingham is a corporate downsizer who advocates having no personal ties whatsoever, and so is a little surprised when he develops feelings for the female version of himself, his casual sex partner Alex. Here, they part from one another at an airport gate.

Well, call me if you get lonely.

What? “I’m lonely?” Spoken by the protagonist? Way too on-the-nose, right?

Not in this scene. As delivered by George Clooney to Vera Farmiga in the film, the line is said in sarcastic jest, but clearly contains the ironic subtext of an emotion inside him to which Ryan has never admitted. So, in this great piece of writing, an audience is given the full-on inner feeling, that heightened sense of ourselves that we go to movies for, but in an oblique and very clever (while still on-the-nose) way.

Certainly, subtext is something of which we screenwriters are always encouraged to be ever mindful. We craft our scenes so that what is not said is more important than what is said, and that is all well and good. But sometimes you just have to say it, damn it, so your readers, and later, viewers can feel that tug, that powerful movie tug on the gut or the heartstrings that we count on as part of the experience. On-the-nose dialogue can serve you in this task if it is done right. And having the courage to be on the nose with subtext, while not easy, is a terrific thing to pull off.

We shall speak briefly here of exposition. For certain, clunky exposition is one of the more egregious on-the-nose writing errors. We have all cringed at such lines as “Tom, you’ve been my father’s most valued attorney since he raised you when your foster parents died, and your work on the Barrenblatt murder case was legendary—but I know you’re nervous now that Barrenblatt is out of prison and blames you for everything that went wrong in his life.”

Integrating information we need to know to absorb the story is a challenge, but let’s leave that to your ever-developing skill as a screenwriter and move on.

For we speak here of emotionally on-the-nose dialogue, and how incredibly valuable it can be. Sometimes, a character that hates somebody needs to scream out “I hate you!” And if it is placed at the right time in the script, it can tear our hearts out, rather than simply comment on something we have already seen via the actions and attitudes of the character. For the most part, if it’s an outburst we’ve been waiting most of the story for, it may well work even though it’s on the nose, because it represents a culmination. To unspool an “I hate you!” during Act One would indeed be shortchanging the script; not allowing it to show and not tell for a good long while; not allowing the gradual build up of a character’s interior life that works best for drama.

Do not fear on-the-nose if you can find a way to make it work for you and your audience; let it express something both of them are longing to hear, maybe even only once in the screenplay, but that once, if exquisitely timed, can be a sucker punch like no other.

If you haven’t seen Jennifer Kent’s amazing psychological horror drama The Babadook, you are missing out. Near its conclusion, it has one of the most primal, gut-wrenching and satisfying bits of on-the-nose dialogue to come along in a while. Again, out-of-context, it reads like a cheap catch phrase; far too on-the-nose. In fact, most of the line is quoted in the trailer, as if to prepare us for its “I’ll be back” kind of kitschy, calculated attempt at something memorable. But when you have been through the ordeal that this film’s protagonist has (no spoilers here), and know that it has to do with a mother’s protectiveness of her damaged young son, then:

This is my house! You are trespassing in my house!

delivers just the kind of release we need, want and crave in movies. And as shrieked by the formidable Essie Davis in the role of Amelia, it is devastating.

Finally, the Pulitzer Prize-winning play Doubt: A Parable, became the 2008 film Doubt, adapted and directed for the screen by its author John Patrick Shanley.

In keeping with its title and its ingenious construction, we never really know whether or not Father Flynn (played in the film by the late and definitely great Philip Seymour Hoffman) molested an altar boy at the church school at which he is pastor. The head of the school, Sister Aloysius (Meryl Streep) is certain he did, while a new and open-hearted nun, Sister James (Amy Adams), would rather not believe it.

Another stumbling block for on-the-nose dialogue is a speech that handily explains the philosophy of the writer, not the character. To avoid this, we screenwriters have to completely bury the message in the intent of the speaker and make it fueled by the goals driving the scene. In this mini-monologue, Father Flynn, attempting to bring Sister James over to his side, sums up his view of the tyrannical Sister Aloysius in a beautifully-written set of flowing sentences that clearly express an author viewpoint, but filter it through the mind of the character and the needs of the story so seamlessly that any accusations of on-the-noseness vanish into the ether.

There are people who go after your humanity, sister. They

tell you that the light in your heart is a weakness. Don’t

believe it. It’s an old tactic of cruel people to kill

kindness in the name of virtue. There’s nothing wrong

Shanley’s skill is evidenced in the fact that he closes his speech with a final declaration that, in light of what Father Flynn may have done, throws the meaning of “love” into doubt, as Sister James also perceives. But, until then, this rhythmic and thought-provoking dialogue makes a universal statement about life that came from the mind of the author but could not have come from anyone else but the character within the parameters of the story.

While screenwriters do need to be vigilant about serving up subtext-free outbursts that destroy narrative complexity, there is nothing wrong with hitting the nail on the head when such a strategy can grab an audience by the throat and not let go. As this eloquent argument of Father Flynn’s shows, you can have it both ways. When the rhythms of your story have justified it enough so that your reader is carried along on the intent of your scene and has such effortless trust in your storytelling, it makes on-the-nose seem, well, just right.