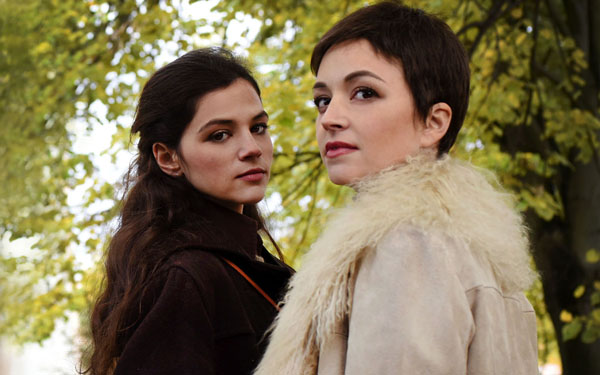 “Telling my story through someone else’s story.” Avi Nesher on Past Life

After almost 40 years of making films both in Hollywood and his native Israel, Past Life writer and director Avi Nesher is used to being pitched. And after the success of his 2010 film The Matchmaker, whose central character was a Holocaust survivor, there was no shortage of people wanting him to help tell their histories as well.

Nesher was adamant that he did not want to do another film with that particular subject matter. But that changed when he agreed to meet with Israeli composer Ella Milch-Sheriff. And the result of that meeting is Past Life. Based on Milch-Sheriff and her family, it is an emotional tale of two sisters delving into their Holocaust survivor father’s past, scared but determined to find out what he may have been involved with during World War II.

Hailed as one of Israel’s greatest filmmakers of all time, Nesher has been instrumental in the development of Israeli cinema. Seemingly a collaborator at heart, he still loves to get notes from his colleagues, and to involve his cast in his writing process.

Creative Screenwriting spoke with Nesher about Past Life, the mathematical versus poetic elements of structure, the importance of a personal story to screenwriting success.

I understand the film is based on true events. Tell me about how you learned of the story.

I was a film critic for many years, and whenever I’m inventing something, I always have this nagging suspicion that it’s probably based on a movie I saw. So I really like to use reality as a starting point in my writing.

I made a movie a few years ago called The Matchmaker, which also had the Holocaust as its subject matter. It was very successful, both in Israel and internationally – and whenever something is very successful, you don’t really want to go back there because it seems exploitative, like you’re trying to use the success of the one to drive the other.

I’m second generation to parents who were Holocaust survivors, and it’s a very sensitive subject. It’s something that I tread on very lightly. And over the past few years, I’ve had many offers from people who have approached me with their personal stories and novels.

But I never really wanted to do any of them because I didn’t feel myself capable of telling a Holocaust story. I wasn’t there, and it’s an unimaginable horror – I can only talk about my generation as survivors and our experience, I can’t really talk about our parents’ experience.

Then I was approached by this incredible Israeli composer that I admire very much – her name is Ella Milch-Sheriff. I saw a brilliant opera that she wrote, and she’s a great composer. Her father had written a diary and she wanted me to make it into a film, but I said no to the meeting as I find those discussions usually lead nowhere.

But she is a very persistent woman, and she called anyone and everyone I know to put some pressure on me – and I finally agreed.

I met her, and I said “there’s no way I’m going to do a Holocaust story – I wasn’t there,” and she started to cry. Really crying in this crowded Tel Aviv café. People started to stare, and it became very uncomfortable…they must have been thinking, “What have you done to this poor woman?”

You know that famous story about Alfred Hitchcock and Ingrid Bergman? “Don’t cry Ingrid, it’s only a movie!” So I said “Why are you crying? It’s only a movie”. And she said, “You don’t understand – it’s about me and my sister.”

I found myself experiencing her story as though it were my own. And then of course I did very extensive research, as everything in this movie is based on true events, except for the dialogue and other things you would have to make up.

But for me it was a very personal experience – it wasn’t really doing a story about someone else, it was about telling my story through someone else’s story.

How did your commitment to only telling the actual events change the narrative structure of the film?

I teach many classes, and I always tell people that screenwriting has two elements: it has a mathematical element and it has a poetic element. The poetic part is very personal, but the mathematical part is structure – it’s something that we all struggle with and try to figure out.

Even the most elaborate building by Antoni Gaudi in Barcelona has foundations and stairways and parking and bathrooms. You have to figure out the nuts and bolts of the structure of the screenplay, and of course real life has no real structure! Screenwriting needs structure imposed on it, and I find that really challenging and really interesting.

I actually received a very funny compliment from a famous film critic I won’t name. This person saw the film in Toronto at the first screening, and before I got up on stage to do the Q&A I saw him running out of the theatre. I thought “My god, was it that bad?”

I carried on with the Q&A and he came back…Then he approached me afterwards and said, “Fantastic movie, Avi”. I asked him why he ran out, and he said “It was your fault. Normally when I see a movie I can always identify the ten minutes between the second and third acts where nothing much is happening and it’s just character development. That’s when I go to the bathroom. In your movie, I couldn’t identify those ten minutes!”

I thought it was a very interesting thing to say, because the three-act structure isn’t easily identified once you base the story on true life.

What type of family dynamic did you want to portray with the Milchs?

The most interesting thing about family relations is we really don’t know much about our parents. They’re the people we care most about and the ones we spend a good chunk of our lives with – but we weren’t around for the first 25-35 years of their lives. And we only know a certain aspect of their lives.

So every survivor had a survival story. Not many of them are as extreme as Dr. Milch’s…But if you’re the child of a Holocaust survivor, there’s a major chunk of your parent’s life that ends up coming out.

In my own life, I heard stories about my father that surprised and shocked me. And I believe it to be true in almost every family, regardless of the parents’ experiences. They were different people before you were born – and you have to live with both the ones who are your parents and the ones who were their own person before you met them.

You’ve had very lengthy careers in both Israel and Hollywood. What were some of the major differences you experienced between the two?

The great thing about Israel is that you have complete and absolute artistic freedom. You truly do. You don’t make much money, even if they’re very successful movies, but you do have freedom. And freedom is intoxicating. You get used to it, and it makes for very interesting cinema. Israeli cinema has come up with some tremendously interesting movies over the last 20 years or so because the filmmaker is in charge.

When working in Hollywood, on the other hand, you meet fantastic craftspeople. I used to love the development people at the studios. I’ve met development people who are truly extraordinary at their work – you can talk structure with them until you’re red in the face. They are very knowledgeable and I’ve learned much from them.

I know there are some people who are bitter about their Hollywood days – but for me, my days there were delightful. I had a very interesting time, and was involved with some very interesting projects.

I think it’s easier for me and comes more naturally to me to make movies in Israel, and it’s where I can really control my own rewrite process. But I love getting notes. I sometimes have a tough time making my films accessible to everyone, because when I think a movie is accessible to everyone, it’s accessible to no one. Very often the more specific a movie is, the more it will be welcomed by a universal audience. And I think sometimes the Hollywood mentality to reach for the lowest common denominator backfires, even commercially.

I involve actors in the writing process – I give them a lot of range during rehearsals, and get input from them. I love having as many collaborators as possible throughout the process, and even though I have the final word, so to speak, the good ideas don’t need to be mine.

So I really like the way movies are made in Israel. It’s very suitable to good filmmaking.

Do you have a specific writing process you prefer?

When you’re writing genre movies, you’re having a dialogue with every single genre movie made before yours. It’s a very strict tradition. So by definition, you are limited in the way you’re able to do it – if you’re making a western, you can’t ignore John Ford or Sergio Leone or colt 45s or horses. You have many “givens”. But if you’re making an art movie, the sky is the limit. It’s wide open.

As a critic, my big thing was genre movies. I saw the great B movies of the ‘50s and wrote much about them. So when I came to Hollywood, that’s what I wanted to do. I wanted to do my version of those movies. And I wanted to do them from an artistic perspective, not a commercial one.

But at some point it becomes very limited. You are confined to the limitations of genre. In many ways, making what one calls “art movies” or “free range movies”, where your mind and imagination can roam any place, suits my temperament better than working within a given genre.

Finally, do you have any advice you could offer our readers?

I think everyone has an interesting story. Every single human being has one really unique story. And I think finding out what’s really interesting about your story, and writing something that is real in the most sincere and deepest sense of the word, is the best strategy, mainly when you’re writing your first feature.

I find that very often your first feature should be as close to autobiographical as possible. When you’re beginning to write your technique isn’t that great and your grasp of structure isn’t that great. But if you come from a very personal place, you have a really good shot at originality. And originality wins out every time.

Past Life is in selected theaters from June 2nd.