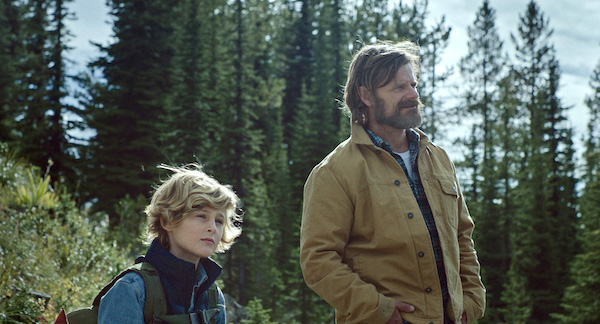 Screenwriter/Director Anna Kerrigan grew up in a creative home. Her dad worked in visual effects. Her mom worked as a poet. “I was always in and around the world of film,” she said.

“I love movies so much, but I hated the industry,” she joked. “My dad was this below-the-line worker and it was really tumultuous and kind of crazy. I actually diverged from film for a while, started working in theatre, and moved to New York.”

Eventually, Kerrigan’s journey led her back to Los Angeles in what she would describe as a “calling.” She made a handful of shorts, including The Rub, Hot Seat, The Jury, and Fridays.

“Gradually, I sort of fused what I had learned in theatre and what I was teaching myself with movies, and sort of gradually made bigger and bigger projects, until I got to Cowboys.” Kerrigan’s feature film, Cowboys stars Steve Zahn as Troy, Jillian Bell as his ex-wife Sally, and Sasha Knight as their child Joe.

Kerrigan grew up in California, but spent a great deal of time visiting Montana as a kid. “I fell in love with this particular part of Montana called the Flathead Valley where we were actually able to shoot the film.”

The location had a special place in her heart. “During a transitional moment for me, I started writing the script for Cowboys, and I knew it was going to be set in the Valley. I didn’t really know what it was about, but I knew it was about this father and son.”

Through the vague image of a father and son on horseback, the screenwriter decided to write somewhat of a getaway story. “They were trying to get away from something, but I wasn’t sure what. The story gradually revealed itself to me.”

These “modern outlaws” consists of a charismatic, yet deeply flawed father who struggles with mental health issues and his transgender kid who has been somewhat cast aside by his mom. “Then, it also became a portrait of a family.”

In one scene from the film, Zahn’s character Troy is trying to explain the child’s identity to Sally (they’ve always called their child “Joe” for short). “Did you hear what I just said about Joe?” he asks. “She said that she is a boy and she feels like she’s in the wrong body, like an alien, like that Body Snatchers movie…”

In a serious, yet comedic moment, we see Joe’s dilemma, one parent who is willing to try and understand, and one who isn’t.

“Two storylines merge in the film,” said Kerrigan. “There’s the Western-aspirational journey this father and son are taking, where they start off starry-eyed playing the role of cowboys going to Canada. Then you’re dipping back in the past learning about the family.”

The screenwriter/director describes the story as a “family drama that plays with Western tropes.” She added, “In terms of being a family drama, I don’t think it’s crazy subversive, but with a Western, you’re playing with ideas of masculinity and what it means to be an outlaw now.”

Similar to our interview with Cheryl Guerriero on Palmer, much of this movie leveraged on the hinge of casting the perfect “Joe.” Luckily, the producers found 10-year-old Sasha Knight who was perfect for the role.

“It was really important to me, from the very beginning, to find a non-binary or transgender kid to play the character of Joe.” Working with Casting Director Eyde Belasco (500 Days of Summer, Transparent), they were able to find the right kid for the job.

“We sent out a casting notice to the traditional channels, where all of the regular agencies get it, but in addition, we hit up non-profit groups, or any group supporting trans youth, or the parents of trans youth. We got the word out that way.”

Although the audition process was pre-Covid, the team still used Zoom to cast (odd at the time) to save money while searching for Joe. “Luckily, we found Sasha in the LA-area. I saw the video and thought ‘Oh my God, who is this child that looks like a little Paul Newman?’”

In addition to having the right look for the role (literally looking like Zahn and Bell’s son), Sasha had real-world experience with the difficulties the character faced in the story.

In addition to Sasha Knight’s character, a great deal of the movie weighs on the character of Troy (Steve Zahn). “Steve is such a fantastic actor. He works incredibly hard. He’s very smart.” Zahn also lives on a horse farm and is a father.

Zahn was always on the casting list, so when he read the script, he actually called Kerrigan from his horse farm. “Just the fact that he lives on a horse farm in Kentucky is so Steve Zahn, and so part of the reason why he’s fantastic in this movie.” (He was actually feeding his animals as they discussed the script over the phone).

If there weren’t enough moving pieces already, both Sasha Knight and Steve Zahn needed to be able to ride a horse. Luckily, this wasn’t a problem either.

From Shorts to Features

Kerrigan had made several shorts and one feature that didn’t get distribution, so she wasn’t afraid to tackle the project. When she grew up, there were essentially no female directors, so she’s thankful modern audiences have more examples to look up to for female creatives.

“My way in initially had always been through writing. But, anyone who is making shorts – and I’m sure there’s an exception – but anyone making shorts wants to make a feature. For me, where I come from playwriting and I’ve done all-length plays, that’s where I want to be.”

Using shorts as a proof of concept, Kerrigan advises novice filmmakers to create examples in order to land full length feature projects. “I would love to do TV for specific things, but I love the feature as a form,” she said.

“I think you can be more of a perfectionist with a feature. You have to hone in on what you want to say and I like the economy of it compared to TV.” In terms of bringing personal stories to the big screen, she advises writers to pitch ideas and look for opportunities like Sundance’s Screenwriters Lab. “People want to know your personal connection to the material.”

She concluded. “Even if I’m pitching a movie about aliens, it’s not even worth pitching unless you have a personal connection to the material. People are hungry for personal stories—if they’re interesting. It doesn’t have to be autobiographical, but there is a market for personal stories that only you can tell. That’s what a creative voice is.”