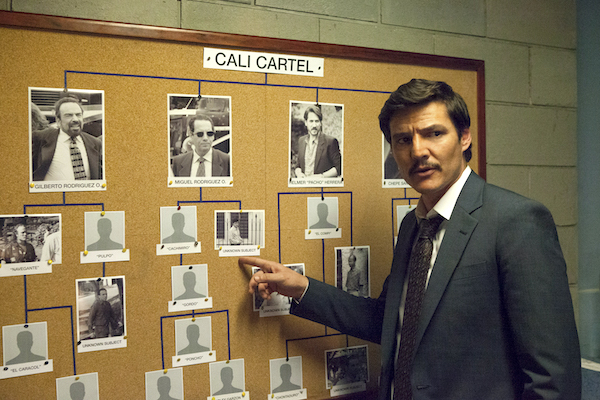 For over twenty years, the idea behind Narcos was marinating inside the mind of Eric Newman. The story, about a war in South America (which showed up on television in Chapter 3) was originally something Newman thought could be a movie.

But, somewhat naturally – and perhaps thanks to how television changed over time – the idea eventually found its shape as a TV series. “We embarked on this ill-advised, ill-informed, poorly planned endeavor to go make a TV show in Colombia,” joked Newman.

“I had been a film producer for most of my career and a frustrated, or perhaps lazy writer, and I started writing the show because I was so into it. By the end of the first season, I had become the showrunner of the show, and stayed there for five years.”

As a producer, Newman’s credits include films like Children of Men, In Time, RoboCop, Bright, and his shows include Hemlock Grove, along with Narcos and Narcos: Mexico.

“Ideally, everything stems from character,” said Newman. “I have had a pretty clear point-of-view of everything I wanted to say about good and evil. I don’t believe in good guys and bad guys. I tend to think of bad guys and very bad guys.”

On Narcos, the story revolves around a chronicled look at the exploits of drug lord Pablo Escobar where Narcos: Mexico follows the rise of the Guadalajara Cartel as an American DEA agent unravels the story of narcos in Mexico.

“I think that the human condition and evolutionary programming of self-preservation, and in some cases self-elevation, is so hardwired that people will often overlook the morality of things that they do.” This is a key reason audiences are attracted to villains.

“The world of Latin American drug cartels is so linked and intermixed with American drug users and governments that willfully or ignorantly (or willful ignorantly) look the other way when it comes to drugs.”

Newman added, “People find ways of explaining it away. That was something present in my thinking, but the thing we had the most fun thinking about was the fantasy of this world –  the life or death aspect of it. It really is a real Game of Thrones and the stakes couldn’t be higher.”

“There’s a lot of beauty [but also] a lot of misery. We had authenticity and reality to guide us. We didn’t have to make up things. We had to maybe explain them or connect them narratively, but it all was there. It was easy to build because it already exists.”

Newman said his favorite thing about writing television is spending enough time with someone that you might overlook the horrible things that they do. We’ve seen this with Tony Soprano and Walter White, of course, but it’s becoming a staple of what makes good television.

Newman’s favorite character is Pacho Herrera, who was the only publicly gay narcos discovered while researching the series. Herrera, one of the leaders within the cartel, was introduced as an adversary to Pablo Escobar (the drug lord).

“We see that shift again and again in television, where in a two-hour film, if a character blows up an airplane, he’s a bad guy. You can’t redeem him. He’s a James Bond villain that had better die in the end. But in a television show, we see Pablo Escobar blow up a plane and two hours later, we see him with his children, or with a bunny rabbit, or with the world lined against him, and we feel sympathy for him.”

Newman said, “That is often what drives us when we create and build these characters: can we take a character from loathed to beloved or beloved to loathed.”

In the film world, however, he also mentioned Michael Corleone from The Godfather. “He rejected the whole idea of whoever he was pretending to be in the beginning and that worked over the six hours of The Godfather.”

When thinking about long-term characters, he thinks to himself, “Who are they going to become?”

Writing Beyond the Facts

The challenge in writing these characters as empathetic comes from trying to explain what they did without giving any sort of excuse for it.

“I’m a firm believer that truly evil people don’t know they’re evil. They’ve come up with a justification for what they’re doing. We’ve been able to get pretty creative about the justification, but it always feels close to the truth.”

The TV shows’ villains blame Americans, the drug market, the Colombia government, or the Mexican police. “That often guided us. Obviously, we didn’t get the benefit of speaking to these people, but the few narcos that I did speak to, I found frustrating.”

He added, “Everyone has an angle. Everyone has something they’re selling. Every busted narcos has a story that they weren’t half as bad as they were made out to be. That may be true, but rather than focus on that as the outward reality, we were much more interested in the inner reality and the world they had constructed in their own minds.”

Newman and company also talked to former law enforcement, former lawyers, and other people within the world of Narcos. “If their former client was dead, they spoke perhaps more freely than they should have. I tended not to believe a lot of it. The thing about these stories is that you’ve never met a group of people more full of shit than cops, politicians, and journalists who touched these stories,” said Newman.

“The journalists were the best of the bunch because they got into it for no other reason than to tell the truth (most of them), but their truth was run through the prism of conspiracy, government, corruption, backroom deals, and tremendous peril. So many of them were killed, so there’s an anger there – understandably.”

“You have to pick the most human version of the story that rings the trust and I like to think we did. It wasn’t always easy. You have to be alone with these people sometimes and try to get in their heads. It was occasionally a dark place to be.”

Writing as a Career

“[Writing] is my favorite part of the job,” said the screenwriter. “When you’re a movie producer, you’re a facilitator of the dreams of others. I think that’s always true as a film writer because you’re working for a director. Writing television has been the most creatively fulfilling job I’ve ever had,” despite not knowing what the outcome might be. “I think the truest thing that has ever been said to me is that at the end of the day is, ‘if you wrote something you like, then that’s everything.’”

Newman said his good fortune as a producer potentially helped him avoid the blank page, but his love for the world of Narcos inspired him to be a writer once more. Mentioning his favorite character again, he described a scene where Pacho Herrera dances with another man, amongst the mostly homophobic members of the story.

“This is one of the most homophobic cultures on earth – on steroids because its the drug business – but they’re watching this man dance and kiss another man, and they can’t do anything about it because he’s a boss. It’s this great power play and I was so happy when I wrote it. I remember closing my laptop after writing that and thinking, ‘This was a good day.’”

“If I have more of those days than when I finish and think everything was shit, then I’m pretty happy,” Newman joked. “Other than my children and my wife, that’s the greatest gift bestowed on me in the last ten years. That feeling is worth all the money, all the awards, or all the outward acclaim, in the world.”

Coming in with a producer’s point-of-view, Newman said the producer/screenwriter relationship is especially important in the role of the Showrunner. “What can be done? What can’t be done?”

Because he produced movies for twenty years, he has uncovered what he calls the “psychology of artists,” which he described as “talented, complicated, overpaid people,” which is vital for running production, but also a TV writers’ room.

“I could speak at great lengths about my TV writers room and knowing he’s in a bad mood, she’s upset about what happened yesterday, or I’m beginning to lose that guy, and to be able to see that is a little like war and seeing the 360 degrees of a battlefield where you can’t do that if you’re just a writer. It’s too hard.”

At the same time, Newman said it’s just two different types of people. “Being the other way makes myopic TV writers, who are better than I could ever be, but it’s limiting in terms of what you can manage, stay in front of, or get ahead of.”

“It also prevents you from having to surrender part of what you’re doing to people who speak a language that you don’t speak. I like to know what it needs to be and know I can affect the change.”

Over the years, Newman has read hundreds if not thousands of scripts. He believes there is a tangible aspect that separated good from great. “I have trouble articulating it, but when I was seventeen, I saw Die Hard in the movie theater. It changed my life because it was the first time that I understood a movie is not about its plot.”

Specifically, Newman referred to the plot of Die Hard which is about a man taking down a bunch of terrorists on Christmas Day, but the story is really about a man dealing with a dying marriage.

“It’s about a guy who has been left behind. His wife moved West with his kid and left him behind in the Stone Age, basically, as a New York knuckle-dragging cop. She’s not using his last name anymore. She’s competing and winning an award in a world he doesn’t understand.”

However, there is a middle ground between the story and the plot. “When the shit goes down and none of these other fancy Rolex, silk suit-wearing guys can handle it, John McClane (Bruce Willis) can. It’s the reaffirmation of his role in the family.”

“For me, that’s what I look for in a script. What’s it really about? It’s not the message so much, the meaning [of the character] in the end. It’s the reconciliation of what I want versus what I need.” If the character doesn’t figure this out, it’s a tragedy, but if they do, it’s a triumph. Newman said of Rocky, “He doesn’t need to win the fight, just to show everyone that the can do it, and he does.”

“For the most part, these scripts don’t come along very often, but that’s my favorite thing about story. Every well-drawn character, in my opinion, is someone where you know what they’re looking for, and if you’re paying attention, you know why they may not get it.”

“The conventions of drama and storytelling exist for a reason, but because they exist, you can subvert them here and there. Ultimately, like anything else, you have to judge something when it’s finished, but the trick of keeping someone’s interest is [character]. Does she figure it out? Or does she crash and burn? You can have a hook and never have a theme, but my appreciation for the thematics comes underneath a great story. That’s everything.”