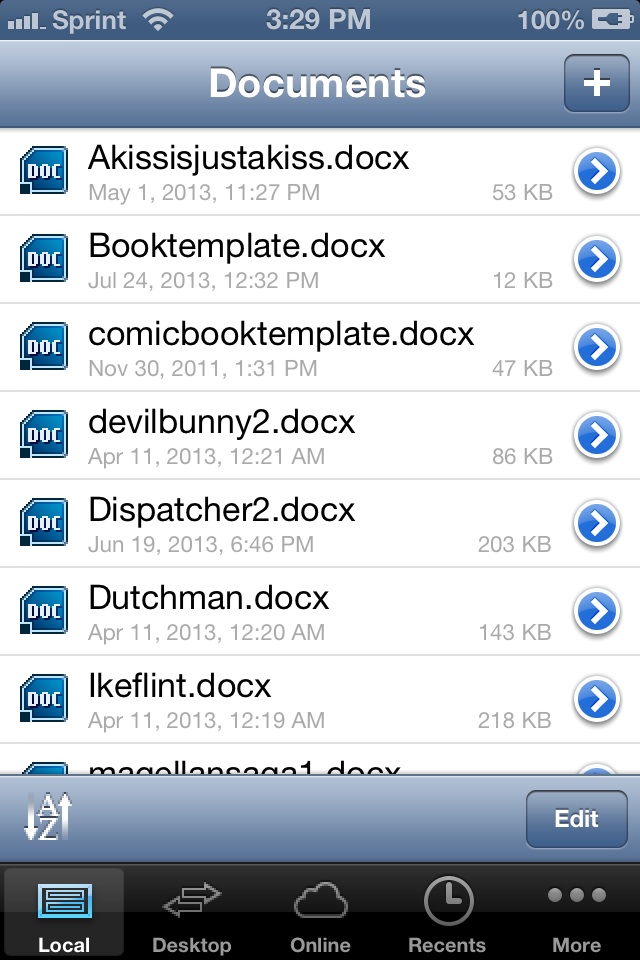 Documents To Go by Data Viz has been around awhile (I had it on my Palm Pilot, way back when) and has been a generally solid writing app that does a lot of things well. But, it doesn’t do everything, explaining why, like with many apps, there just ain’t no replacing the actual computer on which the user will then fix the text using their latest copy of Microsoft Office. If this review were to appear in www.booksie.com or some other novel- oriented site what I have to say would seem more positive, because I really don’t write scripts, plays or comic books using this app, but I do rock the books and shorts.

The app (premium edition $14.99 in iTunes App Store) is a third- party mobile tie-in with Microsoft Office and can read and edit the big three MS Office files (Word, Excel and Powerpoint, both flavors, 2011 for Mac and the previous non-XML versions). And considering that at least eight years of development has gone into the program, the user has more than enough options for moving, saving and working with the text. I use it with my Dropbox account, but I can email a file, use the cord with iTunes or use a WiFi sync page that loads onto your computer’s home screen.

The makers stripped Office down quite a bit to make it fit for downloading and updating via an app store. They give you maybe seven fonts of which three are Arial, New Courier and Times New Roman. Of course, these are the most used fonts that I’ve encountered so it all works out. Unlike, Microsoft Word, where it is fairly easy to write with italics, bold or underline just by clicking the button in the toolbar, Documents to Go seems to work best if you type your text and then go back over it using the smartphone’s native text highlighting feature to make the changes. There are a few punctuation symbols (quote marks mostly) that have to be fixed on the computer so that the manuscript has a consistent look, an easy accommodation. And there isn’t a symbol browser for anything like a copyright symbol.

My “work around” for most of these issues has been to make of template of the document I need on my computer, using it to type the text in the app, and then I use Cut to get rid of the boilerplate. For my novels and short stories, I get what I need even if I only do a chapter at a time, because page breaks have to be done on the computer. No negotiating there. Pretty much any really cool, but highly complex Microsoft Office task like trying to manage the two columns of an AV script (commercials and news writing), just won’t happen, Ducky.

The main reason why I don’t do scripts with this app is that it blows chunks trying to manage any kind of tab stop other than simple indentation. In my novel and short story writing I indicate songs and poetry with small offset margins using italicized and justified text and, you guessed it, I have to fix all of that on the computer.

The template that I created for screenwriting is an approximation of proper format that leaves the Character and Dialogue elements over on the left margin (see Picture B) to be fixed when I cut and paste from Word to Final Draft on the computer.

As an app, it’s stable. It doesn’t crash, freeze up, lose data or steal credit card info. If you can manage the small screen on a smartphone, or tie in a Bluetooth keyboard with an iPad, most writers will do fine doing general writing. In short, you won’t do your magnum opus Tom Sawyer V. The Vermicious Knids 5 on Documents To Go, but you might pull off the body of the query letter.