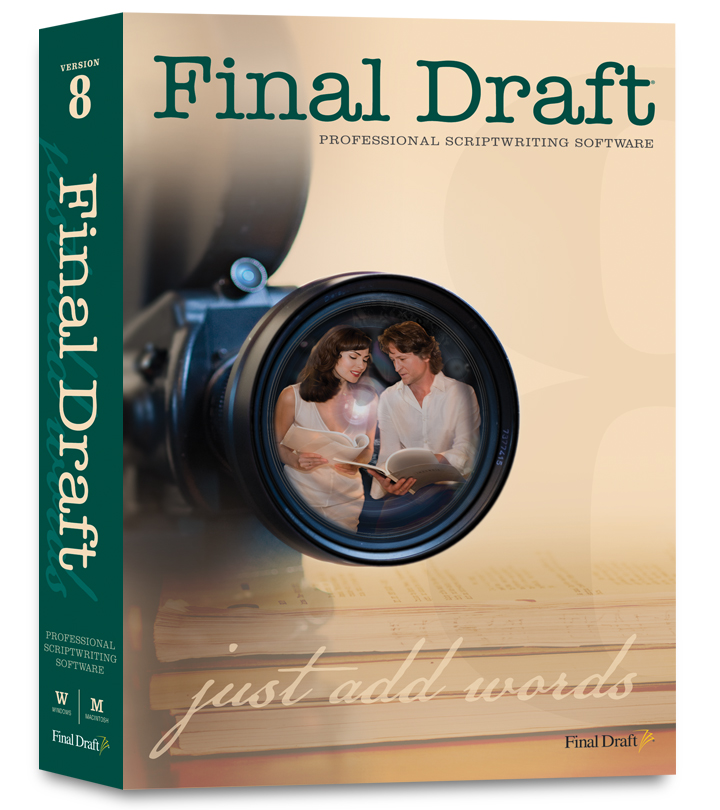 Final Draft 8 as the latest version in a long line (twenty years at least) of software designed to automate the process of getting our words into proper screenplay format would seem nearly so ubiquitous that pack your bags, fellas, it’s all over but the shouting would be the phrase of the day. Believe it or not, but there are still competitors lurking out there (Movie Magic, Celtx, etc.), so perhaps this review is required. Actually, I mostly want to talk about the iPad app version and how it integrates with the desktop software.

Final Cut became the screenwriting analog of how MS Office left WordPerfect broken by the side of the road wondering who was that masked writing program that just slashed my jugular by making nice with the Assistant Director, Script Supervisor and Production Manager. Legend has it that it was these departments that developed modern screenplay format in the first place, before the writers could unionize and complain, but I digress. When the production people started using Final Draft to do their jobs, then various writers went along because if the script file had to be in FDR or later FDX on set, then you might as well go to the source. The competitors made their programs Final Draft compatible to stay in the game.

Screen from the Final Draft 8 App for the iPad

There isn’t much to say about the desktop Final Draft that hasn’t already been said, it works because the creators have had a long time to make it work for everybody, writers and ADs. The desktop version can manipulate a script in any way required and export that information to software used by the various departments on set. They thoughtfully included a lot of templates for currently popular shows, comic books, plays and comic books. You can even write a novel from the desktop version. For $300, the desktop program will do almost everything, except AV scripts.

Final Draft 8 came about when certain app makers started finding ways to write screenplays on our mobile tech. It started with Black Mana’s two versions of Screenplay that Final Draft initially supported, but others jumped in. Final Draft decided it would be easier and more profitable to update everyone who wanted to work on a mobile device to a new version as a way to solve coding problems. My upgrade was $40. After they had the experience from working with Black Mana, they then built their own iPad- only application. At $10/app, they haven’t looked back, because Final Draft is still the source.

The app is awesome for lots of reasons starting with the fact that the coders thoughtfully give the four templates we need most—Screenplay, Play, Hour TV and Sitcom with all the elements included (no omitting Shot, like Black Mana’s Screenplay). True, I’m sure the sharp-eyed reader has read my bio and asked “aren’t you also a comic book writer?” My comic book template is just a simple tweak of the Screenplay template; I’ll live.

The primary limitation of any mobile writing app is that the pop-up touch screen keyboard uses up so much of the visible writing space. But, my iPad has been paired up with an external Bluetooth keyboard allowing me to Rock ’n Roll as I type. The font- specific quote marks don’t translate from the app to the computer, but then they don’t do that on most of my other apps either. I fix them later on the computer. And I’ve learned not to start certain types of scripts on the computer based on some of those templates in the desktop version, because I ended up hitting more keys than I should to make the script look right.

I have yet to break what seems to be the unbeatable combo of Final Draft with an awesome app that pretty much behaves as advertised. Part of me would like to see if they come out with an iPhone version and complete the mugging done on Black Mana’s Screenplay, but since the current app can be used offline and synched with Final Draft upon reaching a WiFi node there isn’t much that it won’t do in terms of writing movies.