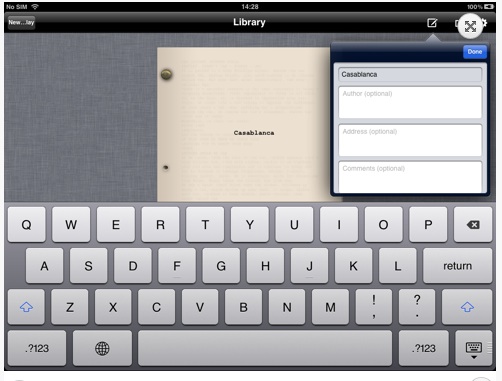 Screenplay by Black Mana is one of those first draft apps that seem to get blown away by later developments (namely Final Draft creating their own iPad app in 2012) and yet hangs on. Realizing my other mobile writing tools wouldn’t ever give me a screenplay that looks like a screenplay, I needed to find an app. Screenplay by Black Mana came up first. I ponied up $4.99 for the iPhone version and have been pleased ever since, even if my actual usage is more like gun ownership—“it’s better to have it and not need it than to need it and not have it.”

List of scenes on Black Mana’s Screenplay app for the iPhone.

Actually, my cost was a little more than the app’s list price because I was still using Final Draft 7 on my desktop and I needed version 8 to get the fully- supported usage (.fdx). I spent about $40, though I suspect everyone coming to the screenwriting game as a new writer will just have Final Draft 8.

Screenplay works through Dropbox (It was the original reason I signed up for the cloud service). You move your Final Draft files into the Dropbox folder on the computer and then download them onto your device. The included pictures show that the user inserts the desired screenplay element and begins typing before moving on to the next.

It all works the way everything works writing on an iPhone. Tilting the phone rocks between Portrait and Landscape and the app uses the same autocorrect as every other app that uses the built-in virtual keyboard. So far, the app has never needed to be deleted and reloaded from the App Store, as has happened with a few of my other apps. If you intend on writing a screenplay (teleplays require a lot of jiggery-pokery, while there are no stageplay or comic books scripts allowed with this app), then it’s a good place to start.

Screenprint from the iPhone app Screenplay by Black Mana

And now for the medicine. The iPhone version, which is the only version I kept when Final Draft introduced their own app, doesn’t have a key element that Final Draft (both app and software) does: Shot. I fully realize that we as writers are supposed to be doing Master Scene scripts with limited camera direction, but that rule gets fudged a bit when doing sniper movies (e.g. SCOPE-POV:). The app doesn’t read the Shot element even in an incoming imported script. The work-around is to use the Caps Lock button while in the Action element to mimic the Shot element and then fix it on the computer later.

The iPad version of Screenplay (currently $8.99) brought full capability in terms of choosing Scenes, Action, Characters, Dialogue, Shots and Transistions. But, Final Draft came out with their iPad app at roughly the same time and rode the superior brand and complete functionality (screenplays, plays, comic books with a little tweaking and teleplays) all the way to the bank. Naturally, I deleted the iPad version, but kept my iPhone version, just in case I wanted to write on my phone (a big if considering the small screen, but people have to write when they get ideas).

If I had my way, Black Mana would incorporate the Shot element into the iPhone app and abandon their iPad app. They would rule the iPhone environment. However, once you figure out the tricks Screenplay for iPhone is a solid writing tool.