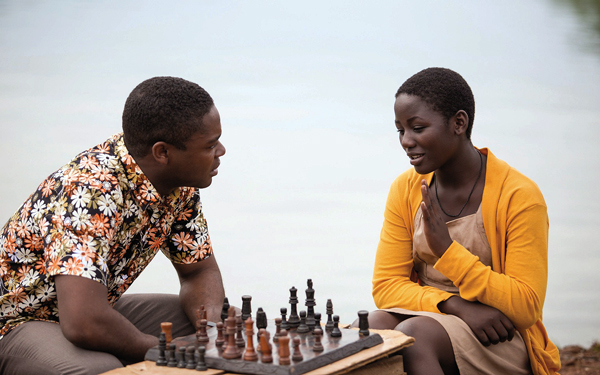 Queen of Katwe: Expanding What a Disney Film Can Be

Queen of Katwe tells the story of Phiona Mutesi (Madina Nalwanga), a real-life Ugandan chess champion who uses her mastery of the game to rise out of poverty. During her journey, she is torn between the optimism of her chess coach, Robert Katende (David Oyelowo), and the practical skepticism of her mother Nakku Harriet (Lupita Nyong’o), who is concerned that this path will ultimately lead her daughter to more of the disappointment that already permeates their lives.

Based on the 2012 book The Queen of Katwe: A Story of Life, Chess, and One Extraordinary Girl’s Dream of Becoming a Grandmaster by sportswriter Tim Crothers, Queen of Katwe charts new ground for Disney because of the story’s African origins. Yet it also continues the tradition of Disney’s “based on a true story” underdog sports movies like Remember the Titans (2000), The Rookie (2002), Miracle (2004), The Greatest Game Ever Played (2005), Invincible (2006), and Million Dollar Arm (2014).

The material came to Disney through its subsidiary ESPN, which published the book, and was championed by Disney executive Tendo Nagenda, who is of Ugandan descent. To direct, Disney turned to Indian filmmaker Mira Nair. Nair brought on screenwriter William Wheeler, with whom she worked with on the 2012 political thriller The Reluctant Fundamentalist.

Wheeler credits much of the success of his career to his involvement with the Sundance Institute early in that career. His script The Prime Gig was selected for the 1998 Screenwriters Lab and was released in the United States in 2001, with Vince Vaughan starring. Wheeler followed that with writing the screenplays for 2006’s The Hoax, 2012’s The Reluctant Fundamentalist, and writing for television, including several episodes of Ray Donovan.

In addition to his work on Queen of Katwe, Wheeler was also involved in the early stages of adapting the screenplay for the live-action version of Ghost in the Shell.

Wheeler spoke to Creative Screenwriting about meeting the real-life inspirations for the characters in his screenplay, how his work as a mentor for the Sundance Institute has taken his writing to new territory, and what he is looking forward to seeing in the Ghost in the Shell live-action film.

How did you get involved with Queen of Katwe?

I previously worked with Mira Nair on The Reluctant Fundamentalist and we got to know each other pretty well in that process because it took a few years. We had knowledge of how we work and how we bounced ideas off each other. Disney very quickly and very appropriately thought of Mira for Phiona’s story, and Mira thought that I might be a good person to try to give them a screenplay. I trusted Mira and Tendo Nagenda, the executive at Disney, and tried to give it a shot.

From a Hollywood studio’s standpoint, a film about chess that is set in a non-Western country seems like a challenge and a tough sell. What were some challenging aspects of writing the script?

There were a number of challenges. Part of what the hope was in terms of what we were trying to do was to gently expand the idea of what a “Disney film” could be. Disney was very open to wanting to tell an aspirational story about someone from someplace that is not at all familiar to Western audiences.

We tried to walk a line between telling a pretty authentic story about Uganda and Katwe while still keeping in mind that this is a Disney movie and that this could really fit into one of the things that they do very well – which is telling sports underdog stories and finding the ways the story naturally intersects with that genre of film.

We were trying to find the right balance between those two poles.

Like The Reluctant Fundamentalist, Queen of Katwe is an adapted screenplay. What’s your process when you are adapting a book into a film?

It has been my experience that each script teaches you how to write it.

Sometimes for me it starts with an idea that pops into my head as I’m reading the material for the first time.

It arises somewhat differently each time that I work on something. It has taken me a lot of time to figure out and trust that process. I think, “Okay, I don’t know what I’m doing yet, but I’m confident that I’ll figure it out pretty soon.” [Laughs]

One of the key relationships – and conflicts – in the film is between Phiona and her mother, Harriet. Could you talk about writing their relationship?

One of the things that became clear once I had a chance to spend time with Coach Robert, Phiona, and Harriet was that during the period when Phiona was figuring out that she had a special talent and she was starting to find some success she had two different role models in terms of how to view the world.

Harriet is someone who had learned by hard experience to be very stoic and suspicious about anything that sounded too good to be true. To her, this whole chess thing for a long time sounded like something shady was going on. She thought there was gambling involved or the children were being mistreated, and she was not supportive for a while mostly out of a very deep concern that she didn’t want her children to be hurt or disappointed. She taught Phiona to be very stoic and cautious.

At the same time, Phiona was being exposed to a new way of looking at the world from Coach Robert, which was more boundlessly hopeful and telling these kids that if they made a plan and followed a certain program that he suggested that there wasn’t a reason that they couldn’t eventually enter school or, even beyond that, university.

For a child growing up in Katwe that’s like saying, “Why don’t you jump to the moon?” It’s an impossible thought.

It becomes very crucial to the story because I think Phiona in many ways is caught between her mother’s worldview, which is very familiar to her and she knows her mom loves her, and yet she is more drawn to Coach Robert’s worldview which offers her a way out of some of the difficulties and indignities of having to live with certain predations in Katwe. We decided that negotiating and navigating those two different ways of viewing the world was the story of the movie.

Coach Robert has a line that expresses his optimistic worldview: “Why should she be denied the glory of victory because she was born here?”

When you talk to Robert, that is his mantra. He is very determined to help these kids understand that where you were born or the circumstances in your life right now have nothing to do with where you’re going, or there’s no reason they have to limit you from making your life different. That’s a message that he communicates to all of his students, so we thought that was the right thing for him to be telling them in the movie.

I tend to really delight in writing smaller characters because someone can come in and have a big impact on the narrative because of who they are as a character. You can allow those characters to be a little bit comically larger than your main characters some of the time.

I delighted in meeting the people that they’re based on, and then using my imagination to find the right quality for a character or a scene that gives you what you’re looking for. I find it really fun to make those characters pop and be funny. It’s a fun challenge.

In both The Reluctant Fundamentalist and Queen of Katwe you’ve shown a talent for writing screenplays about people we don’t normally see in studio films. Why do you think your career has gone in this direction?

That’s a really good question, and I don’t know if there’s an easy answer.

I know that there are two distinct spheres of influence that had a big impact on me and my writing. One is meeting and working with Mira, who is a real citizen of the world and someone who has a really sophisticated sense of cultural differences and yet also the common humanity that we all share. I have learned a lot from the process of working with her.

The other place that has been really instructive to me is that very early on my career was started by my involvement with the Sundance Institute’s Feature Film Lab. Since then I’ve become a mentor in their program and I have had the chance to travel around the world. I’ve been to places like Istanbul, Mumbai, and Jordan as a mentor and an advisor to filmmakers.

In the process of doing that I think that I developed an incredible appreciation for the fact that amazing differences in these cultures mean that the stories are original and different in incredibly cool ways, but you’re constantly coming back to the same themes no matter what.

You can go to an Inuit tribe in Alaska or when I worked with filmmakers in Beijing and it always goes back to these same foundational issues, like “Who am I?,” “What’s the nature and the deeper meaning of my familial relationships?,” and “What do I want to accomplish in the world, and what’s stopping me from doing it?” These are universal themes that exist everywhere.

I’ve been very privileged and lucky to get closer access to a lot of these different stories coming from different parts of the world. I would like to think it’s informed my ability to participate emphatically in the lives of characters that on the outside look a lot different from my life.

You also worked on the screenplay for the live-action adaptation of Ghost in the Shell. As with tentpole films like this, you’re one of many writers who have been involved. What did you work on the screenplay consist of?

I worked on Ghost in the Shell for a period of about a year and a half. It’s a vast enterprise. I think I was second or third in the mix, and I know there have been at least six or seven writers. I don’t know completely where they landed quite yet – I’m hoping to find out soon – but that’s fantastically interesting source material.

I think the director, Rupert Sanders, is a visual master, so for many reasons I’m curious to see the direction they wound up going and what the movie winds up being!

Take a look at Queen of Katwe on Amazon.com