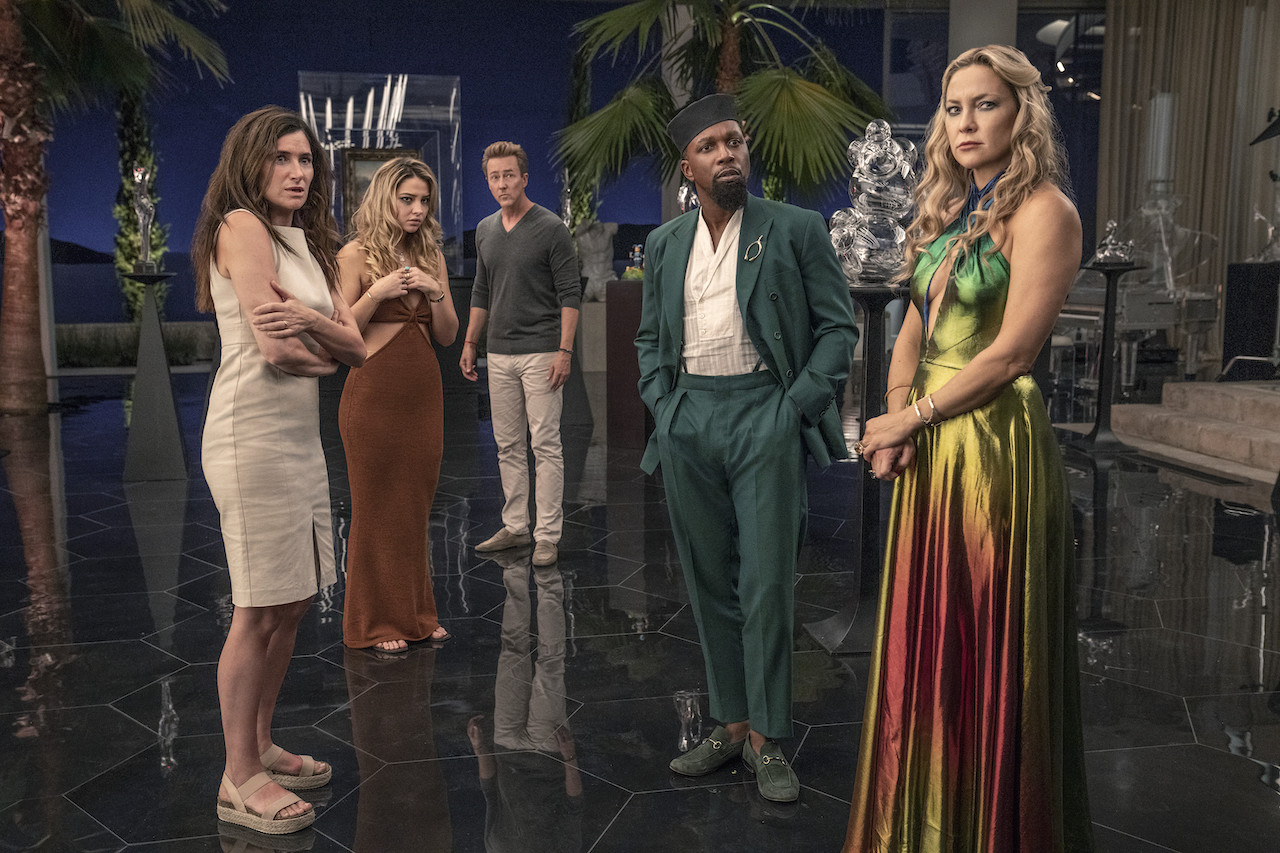 After the phenomenal success of Knives Out, it was only a matter of time when writer/director Rian Johnson (Looper, Brick) considered a follow up to the cinematic niche he’s carved out for himself. “The starting point was going back to the source and thinking about Agatha Christie and what she did with the whodunnit genre,” he said. Johnson had no interest in creating a Knives Out 2. He wanted to create a whole new murder mystery. “Glass Onion needed its own reason to exist without being built on what came before it,” he asserted. The kernel of a possible follow up was planted on the set of Knives Out and allowed to ruminate during production. After the immense fun both cast and crew had, Johnson decided it was time for the fun to continue into a second round. Rian spoke with Creative Screenwriting Magazine about his process in writing the perfect whodunnit mystery. 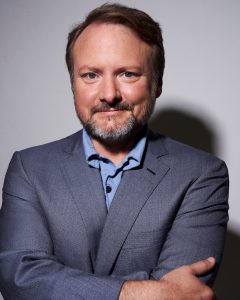 All this had to be front-loaded in the first act so the audience has an anchor. “You have a huge ensemble, each with their own motivation and they all need to be crystal clear as quickly as possible, almost like the characters in a clue game,” he added. In Knives Out, Johnson rapidly and efficiently unpacked the suspects via a montage sequence as the characters were interviewed by the police. Johnson used online interviews to rapidly telegraph the characters in their natural habitats in Glass Onion to set up the first act. Each suspect was sent a puzzle box with their annual invitation to visit billionaire entrepreneur-philanthropist-disruptor on his private Greek island for their murder mystery game. “The box gave it an element of fun, a spine, and a way for all the characters to be on speaker phone solving the mystery of how to open it together, so you see the dynamics between them in real time.”

It’s a roller coaster and not a crossword puzzle

Rian chose his character mix by deciding what types of “friends” billionaire Miles Brown might have given that most of his associates were staff to maintain his compound. Then Johnson built out an interesting spectrum of personalities to populate the field. “I wanted to create a microcosm of society and everyone to be as distinct as possible.”

Rian Johnson began writing with an overall structure of the story without any real characters except for the villain, the killer, the protagonist and the detective. The characters were still archetypes at this stage with few defining characteristic. “Then I sculpt the characters to the needs of the story.” This is an understandable strategy given that the mystery genre is so plot-rich. However, plot could never unfold at the expense of character.

Glass Onion is a larger than life mystery caper with even bigger characters. It’s a delicate balance to keep them both elevated and grounded at the same time. “Character has to start in a very interior way, even with inflated characters.” Johnson decided on the part of each character he most identifies with to determine the best way into the story. “Even clownish characters like Birdie, a former fashion icon, needs moments of empathy where you see she’s a survivor driven by her underlying fear of losing attention and relevance in a fast-paced world.”

Despite their apparent lack of bonding, the friends are drawn together by their united sense of disrupting the world with Miles at the helm. “The group of friends begin in an idealistic place which rots and falls apart over the years is the heart of the character arcs,” said Rian. In some respects, they’ve become strangers. “We meet everyone in the middle, where they are… a few moments before being invited to the island.” Their friendship is at its lowest ebb and everyone wants to kill the center of their friend group, possibly even each other. “It’s only in the middle of the movie where we do a big flashback of the group in happier times and reveal their origins and what initially drew them together.” After they arrive in Greece, Rian explores their self interest that keeps them there and being supported by a very toxic power system. 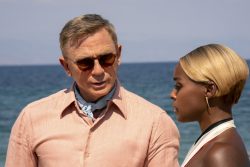 Constructing a successful whodunnit relies on giving each suspect equal motive to kill and the audience sufficient breadcrumbs to build their case for each. “It’s tricky orienting each character something to do to feel suspicious to the audience.” Rian Johnson also writes knowing that these ensemble scripts will require all-star casts so every character needs to be adequately serviced. Once he’s written the first draft, he steps back, feels it out, and decides which character needs “an additional moment of suspicion.” Everyone is a viable suspect until the murderer is revealed.

Benoit Blanc (Daniel Craig) is the antagonist that eventually unveils the killer. “He’s central to the story, but doesn’t have the biggest character arc. He’s slightly god-like and outside the sphere of human drama,” said Rian. After all, he’s the only one that can’t be the murderer. Although the audience is supposed to work alongside Blanc to help his solve the puzzle, Glass Onion shifts beyond a dynamic of camaraderie. The bigger goal is to enjoy the ride and imbue Benoit’s eclectic sartorial choices and dry Southern drawl as he solves the mystery quietly in the background.

Blanc is more central in Glass Onion than Knives Out because he receives an anonymous invitation to the island and we see the world and the character dynamics for the first time through his eyes in real time. He learns as the audience learns. He’s not a crusty detective with a musky overcoat and crumpled hat who lights a cigar when his work is done.

Blanc understands that his in a place with outsized egos and he knows how to manipulate them. He has a constant halo of enigma. Nobody knows what he knows. Does he know too much or too little at any given point? Not even Blanc may know. He plays the fool to make the fools believe they are fooling him.

Another tenet of this genre is the misdirection when audiences are led astray with a series of irrelevant clues. After the suspects arrive, Miles teases them with a cryptic murder mystery game that should last all weekend. Predictably, the hyper-observant Benoit Blanc (Daniel Craig) solves the elaborate mystery Miles constructed in a only a few minutes.

Rian’s “not so red herring” was added as more of comical device to reinforce Blanc’s superb powers of observation and deduction. “It’s a great mistake that the clue gathering, who you suspect and when, and whether you’re right is going to keep the audience on board.” Johnson sees this misleading as vastly secondary. “My focus is the main narrative drive.”

The filmmaker indicated that the audience already brings many of their own red herrings into the story. “I don’t need to provide them with any more. They’re going to mislead themselves.”

Glass Onion serves a pastiche of thematic delights on its cinematic platter. It’s a cheeky social satire about excessive greed fame, ego, and unchecked capitalism. It’s executed as a comedic satire in the vein of Dr. Strangelove. The jokes are an effective way to plant clues in the story because they can either play as gags for the sake of laughs or clues.

There’s a lot going on in Glass Onion and a lot of information to keep track of. Jokes are one way for both the audiences and the characters to keep track of the scoreboard because laugh out loud moments can be memorable. “I need to provide clarity to the audience without always being clear with them.”

Johnson perceives the audience experience as the definition of story and writes through that lens. Another part is filtering out the extraneous information the audience doesn’t care about. An example was a thread of a character constantly zooming with their children that was eventually removed. “We did a lot of simplifying in the edit suite.”

It’s better show exposition as a series of dramatic punches than delivering in a massive knockout in traditional storytelling. “Use exposition as ammunition,” he said. Rian’s decision to pause the narrative mid-point and deliver a massive exposition dump was calculated and strategic. “It completely reframed what you’ve seen before and raises the dramatic stakes to see what happens next.” He compared it to the inert puzzle box which opens, you raise the knob and it spins before it resettles.

“Audiences are readjusting and recalibrating to this new reality.” The expo dump is delivering a new set of facts while they get their bearings. It’s all part of the whodunit experience. It was a big twist that couldn’t be dispersed in any other way.

The second half of the film barrels towards the conclusion at breakneck speed. As you may have guessed, it leads to the big reveal when fingers are pointed and arrests made.

Glass Onion was not created to train the next generation of detectives. It’s primary purpose is to entertain so strap in and enjoy your trip in Greece.