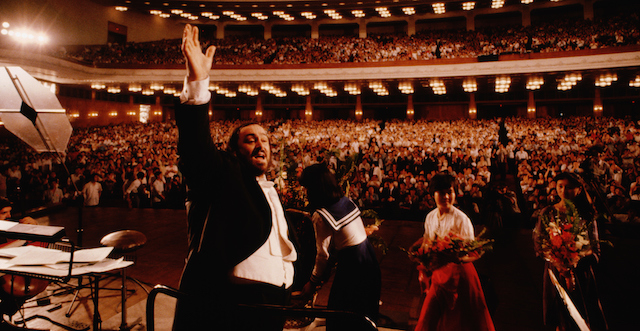 Ron Howard Talks “Pavarotti” The Man Beyond The Voice

Academy Award-winning director Ron Howard has an impressive film and TV resume. He brought the highly acclaimed Frost/Nixon (2008) and the quadruple Oscar-winning A Beautiful Mind (2001) to our screens. Howard, who identifies himself as a generalist filmmaker, turned his directing hand to the music documentary space. In 2013 he directed the Jay-Z backstage documentary Made In America followed by The Beatles: Eight Days a Week – The Touring Years in 2016. Now he brings the story of Luciano Pavarotti to the screen. CBS Films, Polygram Entertainment, Imagine Entertainment and White Horse Pictures produced the film.

Creative Screenwriting spoke with Ron Howard to discuss his film on the life of the legendary ‘People’s Tenor’. His initial intrigue with Pavarotti turned to inspiration as he sought to capture the essence of the passionate vocal genius and philanthropist who often transcended his physicality. With Pavarotti’s humanity came humility, pain, vulnerability, frailty and child-like wonder. How did he reconcile superstardom with living a regular life?

Ron Howard opened the conversation with an admirable imitation of Pavarotti’s famed high C. “It’s like an athletic feat. It’s art and athleticism. It’s almost like figure skating or something. I had no idea of the physical demands of the art form,” he declared as he retreated to his seat.

High Cs aside, Howard is serious about stories that matter, including the one of Pavarotti. “To me, a story matters when it transports an audience in ways that are specific, interesting and maybe informative… but still connects with this overarching human experience,” said the director.

“What’s remarkable about Pavarotti’s life is how relatable it can actually be despite aspects of his life that you could never live. You begin to see the characters tested and demonstrate the power of the choices they make in ways that are both entertaining and engrossing. Ultimately, that’s engaging and satisfying.”

Howard felt that Pavarotti is a compelling story “that unlocks emotion. When you can both relate and be surprised by what he’s going through, it’s that combination that triggers an emotional connection to the audience.”

The specifics of the thematics of Pavarotti are how Howard made the story his own. “Connecting with the thematics and how they get dramatized. Something audiences can share and understand. I look for relatable trains of thought and sensibilities in the characters.”

“Pavarotti lived in an opera world not many people know much about, yet it’s a journey one can imagine going on because he had an openness and desire to live a full-dimensional life.” Although Pavarotti lived a life most of us could only dream about, he was an imperfect human being like all of us. He faced substantial challenges and pressures throughout his life. “Sometimes he succeeded and sometimes his choices led to disappointment.” His challenges and imperfections resonated with fans the world over.

The element of surprise helps Howard make a good story great. “When a story goes in a direction that we wouldn’t have anticipated yet feels logical and plausible… then the story feels like you’ve been handed a gift. You can’t manufacture it all the time. Sometimes you have to let a good story just be good.”

Ron Howard was asked about the elements of Pavarotti’s life that surprised him the most during his research phase.

Pavarotti almost died as a child. Howard pored over when this information should be delivered to the audience and how. Initially, Howard revealed it early in the film, but it wasn’t as powerful as suddenly revealing it after demonstrating the fullness of Pavarotti’s life, letting you know some of the decisions he made and their resulting triumphs and fallout.

“Pavarotti decided as a child to live free and full and live every day to its fullest.” This approach had a greater impact on audiences when they had a greater understanding of who Pavarotti was. It wasn’t so much as a creative decision as an organic one. “It was apparent. Early on, we really delved into Pavarotti having survived near death during World War II in Fascist Italy and being traumatized by it as a child.”

Following the advice of a screenwriter friend, Howard test screened the documentary to a small audience. “The opening had too much information. We just needed to get to the journey. Moving his near death in childhood made it a revelation that fills out the audience’s sense of who Pavarotti was and what motivated him,” asserted Howard.

This spoke to Howard’s belief that “it’s a good idea to share your stories. To pitch. To talk. To see how people respond. At the end of the day, we’re shaping a narrative to communicate and share with audiences,” added Howard. This is especially true for this documentary film where we had to whittle down hours of footage into a narrative to share.

Pavarotti’s father Fernando was also a tenor, but never succeeded professionally. Surprisingly, it wasn’t Fernando that urged Luciano to become ‘The King Of High Cs’ where he couldn’t. It was his mother that urged the young Luciano to follow his opera singing despite no guarantee of success.

Pavarotti’s life was burdened with both professional and personal hardships. “At the height of Pavarotti’s success, he was going through a fallow period – creatively, romantically, emotionally, with his family, and in his work. Everything kind of flattened out. During this time he discovered philanthropy and it invigorated him. It was there all the time, but we didn’t see it as a turning point in his life until much later.”

During his emotionally flat period, (a mid-life crisis of sorts) Pavarotti began to cancel his concerts. He claimed he was sick, but “maybe he needed something to energize him to get him to the level he could perform?” suggested Howard. ‘The three tenors seemed to provide him with that energy.”

The theme of personal discovery also inspired Howard to explore Pavarotti’s life in a documentary format. “It’s not about you sitting down and thinking through all your ideas. It’s more about having a general sense of Pavarotti’s life, but staying open to what you can learn and discover. It is a longer process – a couple of years of gathering footage and considering ideas,” recalled Howard.

“His relationship with his voice and his art form kept him in balance.”

Pavarotti had several affairs during his career, yet audiences stayed with him. Howard considered how Pavarotti’s actions kept him empathetic to audiences. He was Italian. He was romantic. He was passionate. Despite the negative view held by the Roman Catholic Church on his extra-marital affairs, Pavarotti deeply fell in love several times. It was part of the male experience. Even when his hand was forced by the media to reveal his relationship with Nicoletta Mantovani. He faced the consequences, divorced his wife and married his long-time girlfriend.

One of Pavarotti’s missions was to bring opera to the people. “I think being born in Modena, Italy, where opera was for the common person. I don’t think he thought of his idol Enrico Caruso or the other great tenors as being elite artists. The rest of the world did, but not Pavarotti. He felt that opera should be democratized. It was a real calling for him,” argued Howard.

Pavarotti later expanded his musical repertoire into pop and rock. “It was a natural progression. I think it came out of Pavarotti’s philanthropy. It came out of Pavarotti and friends and the fact that he could get these pop singers to sing with him. Although the media and critics didn’t respond well to the crossover, the fans did. I think the criticism hurt him, but he refused to let it define him. There was some courage that he demonstrated there.”

Howard pondered on Pavarotti’s apparent insecurities and turmoil in his career. “I found it surprising. You’d think that if he had that much command of his craft, he’d pretend that he had it all under control. Instead, he made it obvious that he had a real fear of failing and not delivering on the promise of a Pavarotti performance.”

Screenwriters are no strangers to fear, doubt and insecurities. “They know that not everything they write works. Screenwriting is so elusive. It’s beyond technique and imagination. There is something about the alchemy of a screen story that is not something that can be fully anticipated. You have to write it to know if has the makings of a great movie or not. Everyone’s shooting for magic.”

Ron Howard sees aspects of Pavarotti in his own work. “It’s that dedication to an entertainment medium as a way of life. It’s more than a job. It’s the central aspect of your existence and it’s defining. My personal connection to Pavarotti’s story came from a fascination and appreciation. It was more a feeling of discovery than a profound personal connection to the music.”

“I love Pavarotti’s strength of purpose and character. The acknowledgment that criticisms and disappointments hurt and his courage to recognize it but now allow it to follow a higher purpose and reason to work.”

“Some can sing opera. Luciano Pavarotti was an opera.” ~Bono