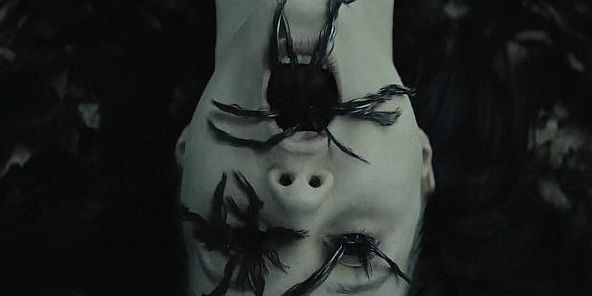 The Scares are Pretty Thin in “Slender Man”

There is one sublime moment in the new horror movie “Slender Man” that suggests the subtler and more disturbing film this one could have been. A couple of teen girls are searching online for information regarding a supernatural creature the web has dubbed “Slender Man.” Amongst the video clips they discover is one occurring in broad daylight. Two young children are being videotaped on a cellphone cavorting down a wooded path. There, in the distance and blending into the trees, is a tall, skinny man in a suit. Is he a ghost, a pedophile, the bogeyman, what? The way he’s just waiting for the children to come to him is an utterly terrifying moment. If only the rest of the film were as patient, clever, and subdued. Instead, “Slender Man” is a wholly predictable frightener with genuine scares ranging from slim to none.

The film’s premise isn’t exactly the freshest to start with as four teenaged girls learn about an urban legend known as “Slender Man” by watching an artsy-fartsy video online. Quicker than you can say, “Naomi Watts”, the girls are watching a video that far too closely resembles the look and feel of the one from “The Ring.” Soon after, the teens are haunted by its contents, hallucinating during their waking hours and having terrible nightmares while they sleep. With such motifs, the film continues to borrow liberally (steal) from “The Ring”, not to mention “A Nightmare on Elm Street” as well.

Then, during a class outing, one of the girls seems to vanish without a trace. Katie (Annalise Basso) wanders into the nearby woods, never to be seen again, and it leads her BFFs Wren (Joey King), Hallie (Julia Goldani Telles), and Chloe (Jazz Sinclair) to fear she was absconded by the Slender Man. Even though it could have been a pedophile or vagrant, the girls cling to the urban legend but don’t tell the authorities or their parents. Instead, they strike out on their own, investigating the woods in the middle of the night. That’s not a wise move, as it almost gets Chloe killed when the Slender Man attacks her, but miraculously, she lives to fight another day. Do the girls alert the authorities about what happened? No, they do not, and it becomes awfully difficult to invest in the fate of such self-destructive leads.

Soon, the Slender Man follows Chloe home, sneaking into her home in the form of a black mist. He’s a resourceful specter, I’ll give him that, but the script doesn’t do a good enough job of giving his actions rhyme or reason. Why didn’t he just kill Chloe in the woods? How many forms can he take? And what is he really after? After the Slender Man ensures that Chloe bites the dust, Wren and Hallie fear they’re next, but they still keep everything to themselves. The nightmares continue, as do the hallucinations, and the Slender Man starts showing up everywhere with the ubiquity of a Kardashian on social media.

It’s unfortunate that the filmmakers didn’t realize that the better way to go with this material was to do a thriller based upon the true story of the two Waukesha teens who stabbed their friend in the woods and blamed it on the actual “Slender Man” urban legend. Instead, the filmmakers seem to have opted to try and build a franchise character, but that isn’t easy when the villain has no dialogue, no face, and no real personality. In fact, he’s so underdeveloped that soon the story is throwing any and everything against the wall hoping something sticks. He grows as tall as the trees, he time travels, he grows branches and gyrating tentacles, and his power can melt faces and induce seizures in bystanders.

Instead, the filmmakers seem to have opted to try and build a franchise character, but that isn’t easy when the villain has no dialogue, no face, and no real personality. In fact, he’s so underdeveloped that soon the story is throwing any and everything against the wall hoping something sticks. He grows as tall as the trees, he time travels, he grows branches and gyrating tentacles, and his power can melt faces and induce seizures in bystanders.

The screenplay by David Birke and Victor Surge starts to veer into the outright laughable, becoming over-the-top with jump scares and incessant screaming by the girls. Meanwhile, director Sylvain White hauls out all sorts of fisheye lenses, skip-frame editing techniques, and showy effects to conjure the scares, but it’s technique, not the story, that gets us jumping. White has done a ton of admirable work on television, but he stumbles badly here, failing to even give distinguishing personalities to the girls.

Young actress Joey King is a veteran of a number of frighteners (“The Conjuring”, “Wish Upon”) but she’s given precious little to play here as Wren. At one point late in the film, we discover that she’s done a ton of research about the Slender Man phenomenon as her bedroom is decked out like one of Carrie Matheson’s conspiracy walls from “Homeland.” It’s a shame the film didn’t make more of Wren’s investigation and the mysterious online witness who’s helping her. Instead, it just drops that unknown character like a hot potato before the third act even starts.

Sure, there’s atmosphere aplenty here, but scary woods do not a worthy frightener make. If this film ends up warranting a sequel, let’s hope it goes back to those vicious girls in Waukesha. You can have your bogeymen and Freddy Krueger wannabe’s, but seemingly innocent children who have homicidal tendencies – – that’s the sort of horror movie villains that will pin every audience member to their seats. Unfortunately, the baddie in this one ranks pretty thin in comparison.

Catch the trailer to Slender Man below: