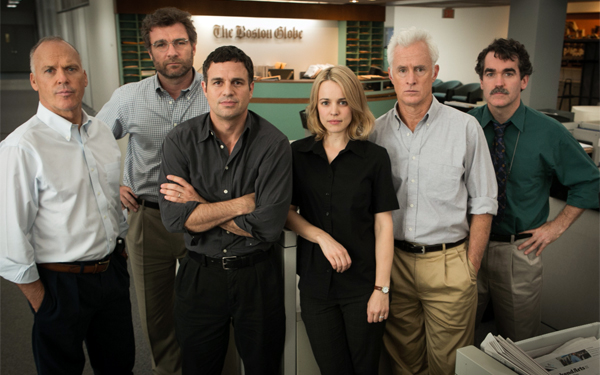 Spotlight: The Burden of Truth

From a news story that broke in Boston, to a major motion picture that was just nominated for six Academy Award nominations (best picture, best director, best screenplay, best supporting actor, best supporting actress and best film editing), Spotlight is a very interesting film, because there is not one hero, but several working together to accomplish one goal. In brilliant fashion, writers Tom McCarthy and Josh Singer capture the themes of moral corruption in great institutions while revealing the power of the newsroom and crusading journalism.

But how do you adapt a news story into a feature film? Adaptations do not always work let alone adaptations of a news story. After The Boston Globe broke the story, it had been told a dozen times. There was a lot of information available, but it was not until the reporters and the victims were interviewed that the story began to pull together. “We had the article and the various books written about this incident, but in this case, we didn’t have a particular direction until we spoke with the actual reporters,” Singer said.

But for an adaptation to work, there must be a very clear, defined story concept, and Spotlight, which often times feels like a documentary, began with a vivid, well-defined story.

Line by line, piece by piece, asking the necessary questions and doing exorbitant amounts of research to know the “real” story, McCarthy and Singer were committed to getting the journalism right and characterizing the victims reliably, to do justice to their story. In the same manner that Erin Brockovich exposed injustice, revealing the case against the Pacific Gas and Electric Company of California, so too Spotlight carried the same burden of truth.

“We had a twin mandate on our shoulders to get this story right,” Singer said. From early on, McCarthy had a vision of not having a single protagonist, and keeping the story authentic. “Motive for truth and accuracy became the catalyst that drove this story,” Singer said.

The film works. Somehow, McCarthy and Singer were able to present a truthful story and connect the hero(s) to the audience. It is hard not to be united to these journalists. We feel their passion for exposing the truth, so when the central conflict in the story is divulged early on, the audience is not only engaged, but nervously waiting with baited breath for the truth to be divulged.

The goal of any story is to provoke emotion. The genre is really insignificant, because it all stems down to these three important elements: character, character want (desire) and conflict. For a story to work, the audience must see the evolution of the protagonist (in this case protagonists), by overcoming seemingly intractable obstacles to their desired end. In the case of Spotlight, this was a perfect setup for a well-told story.

Screenwriting is Storytelling, by Kate Wright

One of the reasons Hollywood gravitates toward “true” stories, is because reality has a gripping unarguable presence. When we watch a person suffer on the screen, but realize that this “actually” happened in the real world, it strikes a much harder chord with us than watching something fictionalized. In her book, Screenwriting is Storytelling, Emmy-award winning script doctor, Kate Wright says, “Let’s establish one rule: When it comes to storytelling, truth is everything.”

Of course, not every true story has enough depth to work as a film. There are a number of variables to look at when considering writing an adaptation of a “real” story. Is the story big enough for the screen, and what is the definable goal of the hero? In addition, the intention behind the story has got to be present for an audience to sit there are watch it. If an audience does not have a connection to that goal, they will get bored.

“This story isn’t about exposing the Catholic Church. We were not on some mission to rattle people’s faith. In fact, Tom came from a Catholic family. The motive was to tell the story accurately while showing the power of the newsroom – something that’s largely disappeared today. This story is important. Journalism is important, and there is a deeper message in the story,” Singer said.

Josh Singer with Tom McCarthy and (the real) Walter “Roby” Robinon on set of Spotlight. Image by Kerry Hates.

Over the last 15 years revenues have moved online and dozens of newspapers have gone out of business. The lists of news journalists and investigative reporters is getting smaller and smaller. “I don’t think many understand the value of a good newsroom. The L.A. Times used to have 19 reporters covering legislature and now they have 4. When you have fewer reporters covering a story, you have far less accountability.

“We wanted to spark or rekindle an interest in accurate and accountable journalism. When there is this kind of accountability among good journalists working together, it has a lasting affect on the public. Remember, Watergate was also a local story that became national,” Singer said.

Aristotle had a lot to say about plot, and the way the characters evolve from the storyline. These elements are organic, interchangeable and definable. Often times writer’s debate whether plot is more important than character – as if the two were equally exclusive, but without conflict, characters do not develop properly. This is particularly true in film, primarily because conflict begets action, and action drives a plot forward. Having a good plot is paramount. It is the nuts and bolts of structure, and without a good premise, the story will be flat.

So, from the get go, McCarthy and Singer had a compelling, promising plot, and the adaptation of this evolved from their commitment to keep it authentic. With this commitment in mind, staying true to the already existent story, and allowing the dramatic situation to unfold honestly fueled the writing process. In the same manner that the investigative reporters dug deep to find the “truth,” McCarthy and Singer dug deep to “know” the every aspect of the story.

The process was not easy; in fact, according to Singer it was sometimes painstaking. “Condensing true-life stories into a two-hour film is challenging, and in this case, it was particularly hard because there was so much information to siphon through,” Singer said.

“It was not only the piles of information; the story was tricky at times. I have a law degree, and after spending days on end going over each letter and document, I still had no idea how to dramatize that, but Tom immediately knew. Needless to say, working with Tom McCarthy was not just a pleasure; it was a luxury,” Singer said.

Even with all of the information that McCarthy and Singer had with this story, the process was not easy. The script went through many drafts. Singer admits that being able to write directly from the transcripts – using “actual” dialogue from the victims became a powerful tool in the writing of this screenplay.

Adaptations are far more challenging to write than fiction. In addition, it is more common to see a script novelized than to see a novel adapted into a film. The uniquely interesting thing about Spotlight is that the story is about a segment of time that revisits the investigation, the journalists and the victims. Told through the POV of the investigative reporters, Spotlight establishes a moral argument, giving the characters (the journalists) a voice for the message. It reminds us that no organization is too big for accountability, and to live cognoscente and aware of what is going on around us.

Co-writers McCarthy and Singer stepped out on a limb, and it was a huge success, grossing over $40 million dollars at the box office. Spotlight’s triumph is the product of calculatingly brilliant writing, outstanding directing and superb acting.

Since this article was published, Spotlight went on to win the 2016 Oscar for Best Original Screenplay.