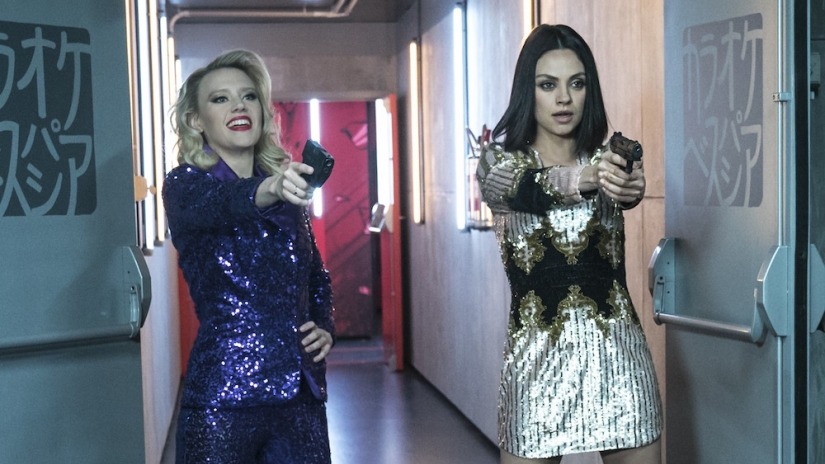 For as many spy films there are that come down the pike, there are almost as many spoofs. “The Spy Who Dumped Me” is the latest and its title doesn’t suggest a lot of originality considering it’s a riff on the 1977 Bond film “The Spy Who Loved Me” whose title was already parodied in 1999’s “Austin Powers: The Spy Who Shagged Me.” Indeed, this feels more like a Xerox of a Xerox, vamping similar gags and scenes movie audiences have already seen in espionage comedies like the “Austin Powers” trilogy, the “Kingsman” series, the “OSS 117” films, and especially, the 2015 Melissa McCarthy vehicle “Spy.” The novelty here is that “The Spy Who Dumped Me” is ostensibly a female buddy comedy, but leads Mila Kunis and Kate McKinnon barely seem to be acting in the same movie together. They have little chemistry and their acting styles jibe about as well as oil and water.

The premise of the film did sound promising when the trailer first appeared in theaters. Audrey (Kunis) is a clueless slacker whose boyfriend Drew (Justin Theroux) is secretly a spy. A mission he’s on goes awry, forcing him to seek shelter at the apartment Audrey shares with her best bud and budding actress Morgan (McKinnon). Drew is shot and killed sending the two women on the lam with his secret jump drive. Throw in picturesque foreign locations, the kind you’d expect in a spy movie, and a cabal of bad guys after them, and you’ve got a funny fish out of water story. The novelty of two likable and talented female comics as the leads should have made it unique and hilarious. Instead, it merely manages to be too derivative and only mildly diverting.

The problem isn’t just that so many of the gags are familiar – they can’t drive a stick, they have to swallow evidence – it’s their characters that are woefully underwritten and miscast. Audrey is supposed to be adrift without ambition or purpose, but what is there in Kunis’ screen persona that suggests that? She’s always essayed steely tenacity, whether it was as Jackie bossing Kelso around on “That 70’s Show”, or seducing Nina in “Black Swan.” Dress Kunis up in a Hawaiian shirt doesn’t make her casual. She’s still the toughest cookie in the room with glaring eyes and hardened delivery.

Kate McKinnon doesn’t fare much better. Her character is supposed to be free-spirited and flakey, but the “Saturday Night Live” star never grounds Morgan as a real character. Instead, making Morgan a thespian seems to be there to unleash McKinnon from playing one specific individual. Indeed, she rolls out accent after accent, and lots of schtick, but what works in skits, doesn’t play in a longer narrative. Morgan never seems to truly be in the movie, rather, she seems to be playing outside of the story. That’s fine for Groucho Marx, but not here. In fact, this is becoming a problem for McKinnon on the big screen as she seems undisciplined and unable to stick to a consistent persona. She gets a lot of laughs, like she did as well in the “Ghostbusters” reboot, but it’s cheating. She’s playing riffs on goofiness, but precious little that’s recognizable as human.

Together, the two talents never gel. McKinnon overwhelms and overacts in every scene, while Kunis fades more and more into the woodwork. Did the screenwriters give up and just let McKinnon run wild? No matter, the effect of her overwrought zaniness mars the suspense and spy story and ruins the stakes. The script isolates Morgan a lot, particularly at the climax where she’s not even in the final battle with Audrey. How can you have a buddy comedy when you separate the friends like that? Aren’t they supposed to be bonding while Bonding?

Flimsily written characters and misguided casting aren’t the only flaws this film struggles with throughout its run. It goes for its R rating with gusto, trotting out a lot of profanity, brutal violence, and even a couple of shots of a flopping penis. Ever since the Farrelly Brothers and “The Hangover”, too many movie comedies have felt the need to push the envelope and earn an adult R, but the cutesy-poo banter here between the two women doesn’t mix with all the “John Wick” nastiness. Characters are blown away point blank, yet we’re supposed to giggle as the women kibitz about dying their hair. The two worlds don’t mix any better than the two leads.

Gillian Anderson shows up for a few scenes, essaying cool confidence with her hushed delivery and form-fitting dress, but the film needs more interesting characters like her. Other than Drew, there are only two others that register, yet the blandly blonde MI-6 agent Sebastian (Sam Heughan) isn’t much of a foil or love interest for Audrey, and Nadedja (Ivanna Sakhno) the gymnastically-inclined assassin, is underused. Paul Reiser and Jane Curtin earn laughs as Morgan’s guileless parents, but theirs are glorified cameos.

Director Susanna Fogel ensures that most of the action is easy to follow, and she knows how to frame a scene decently enough, but there are continuity issues throughout. (Check out the wildly different hair of the two leads from shot to shot, scene to scene.) Some haphazard editing also suggests that either Fogel didn’t shoot enough B-roll to showcase the stunt work, or she was forced to trim things down in post to achieve a more reasonable running time. This comedy still clocks in at an hour and 56 minutes, a bit long for summer fluff. Fogel’s flashbacks showing Audrey’s growing relationship with Drew are misguided too. It slows down the action and doesn’t fill out either character particularly well.

There are times when the script by Fogel and David Iserson indicates what the film could’ve achieved. The best scene occurs when Audrey and Morgan are tied up, about to be interrogated by Nadedja, and they start confessing each other’s peccadillos. Each new girlie secret they sputter is more embarrassing and hilarious than the last. It conveys an intimacy between the two characters that the rest of the spy spoof never comes close to achieving. Instead, too much screen time is wasted on guns, gore, and obvious tropes of the genre. The spy not only dumped his girlfriend, he also unloaded too much machismo upon better female sensibilities.

Check out the trailer for The Spy Who Dumped Me by clicking on the image below: