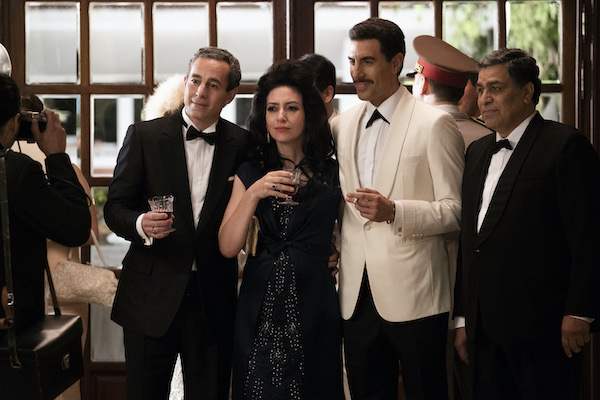 “Stories that Remain in You” Gideon Raff on ‘Homeland’, ‘The Spy’, & ‘Prisoners of War’

“Like many screenwriters, I have thousands of notebooks. Some of them I don’t even look back to, but they feed future ideas and themes you’re dealing with,” said screenwriter/director Gideon Raff. “When I start a project, I have a world of ideas that won’t fit into a two-hour or a four-hour story, but they’re intruding enough to keep living within you. I find that by writing them down in notebooks, they remain in you.”

After serving in the Army in Israel, Raff went to acting school and quickly realized it wasn’t a fit. He then went to advertising and eventually landed in the world of filmmaking. In the early days of his career, he worked in the horror genre, but then moved to espionage and political thrillers.

“I wasn’t big on the horror genre. Israelis tend to not like horror, maybe because our lives are intense enough,” he joked. “But I remember going to Blockbuster and renting every horror film and I found that some of them are so smart. They hit on the nerve of what society is dealing with, so I thought it would be a great challenge.”

Referencing films like Get Out, Raff said he realized how “personal” and how “zeitgeist-y” the horror genre could be. “I tried to take the archetypes of horror and switch them, so in my movie, it’s the girls who fight and the men who run around naked and yelling.”

“It’s always about character for me. It’s always about finding the regular people and putting them in higher stakes. I like politics, the personal prices we pay growing up where we do, and decisions that governments make. Psychological character explorations always fascinate me.”

After The Killing Floor and Train, Raff went on to write for shows like Hatufim, Dig, Tyrant, Prisoners of War, The Spy, and Homeland.

Homeland and Prisoners of War

As a lifelong writer, Raff knew he needed to make his own material. “As someone who wants to direct, when you’re not being offered jobs, you can create your own. When I got the chance to create my own material, I did so in the genres that interested me the most.”

For Prisoners of War, the screenwriter realized his two-year trip to Los Angeles had ballooned to seven years and he wanted to find a path back to Israel. “I started looking for stories that would strike a chord with me and that I wanted to spend time with.”

“I found a world of drama that really hasn’t been explored. We, in Israel, really pay a high price to get our boys back and we demand our government pay the price to get them back. Everyone kind of knows the story of what happens with Prisoners of War, until they get back home.”

Raff said, “Nobody really talks about them after they have gotten back home.” Exploring this “reintegration into society” helped the screenwriter realize there was a great deal of story to tell. “I started researching and talking to many former POWs, their families, their wives, their doctors, and I found a world that was really fascinating.”

The subject matter – three prisoners returning home after seventeen years – was so interesting that Alex Gansa and Howard Gordon created an American version called Homeland, about a rebellious CIA agent and a POW who returns home.

Raff sold the rights to his story so it could be made into an American TV show. “Someone coming home from war is more known in Israel. It’s fewer headlines than in the states. There’s a different sensitivity and suspense,” said Raff. “Other aspects were changed to make it an ongoing series, like the thriller elements. The investigation was suddenly the heart of the show.”

In Raff’s latest series, The Spy, Sacha Baron Cohen stars as the Israeli spy, Eli Cohen. In the six-episode series, audiences are invited to look at the intense life in this remarkable true story.

“It’s a very known story in Israel and Eli Cohen is a hero in Israel. I grew up with the storybooks on my parents’ bookshelf. Because I loved thrillers and espionage, I was always fascinated by his story, but more so because of the personal identity themes.”

To elaborate on this idea, Raff had to narrow down the many stories and myths of Cohen, to focus on a particular time in his life. “It started as a feature, in my head, but when I pitched it to producer Alain Goldman, [I realized] it didn’t fit in two hours.”

He felt like a two-hour version would have felt too much like a James Bond movie, so he expanded the idea to six hours. “I wanted to tell a story of identity, of this immigrant who came to Israel and was then sent to Syria, and rose so high in the government and military in Syria. What did that do to his character? His wife? The friendships he created?”

As he expanded upon this story, he realized that the story could dictate its own length, based on the freedom of making streaming television. “People are more open to different formats. The story dictates the length. There’s no obligation to hit a certain number of episodes and that’s freeing. Tell it the way you want to tell it.”

In an interview on language with Rosetta Stone, Raff said, “Cohen’s story is that he was an Egyptian Jew who knew Arabic in an Egyptian dialect, but had to learn in a Syrian one.” From a writer’s perspective, the first step to translating this to a global audience is simplification.

“The Spy was mostly in English,” he said, “so that was a challenge. We were thinking about how to do that, so what Sacha and I eventually decided on was that Sacha would have a different accent in Israel as if it’s Hebrew, and then he would speak a different accent of English in Syria.”

“Because language is cultured, it was a very big thing for the immigrants who came from Egypt and spoke with an accent. Then, in Syria, Cohen had to speak with the musicality of Syria in order to sell himself as one of them. Sacha spent a lot of time working on those accents and I think he did an incredible job.”

For a story like The Spy, there’s a great deal of research to be done by everyone involved. In his first serious role, Sacha was also familiar with Eli Cohen. “It was such an interesting time in the Middle East, right before the Six-Day War. It’s kind of the basis of what we see now and what created the Middle East we know now. Sacha was very fascinated with the region and the character. He gets to play almost two roles in one.”

The writer knew about the hero and the legend, but it wasn’t until he met the family that he knew the real implications of this heroism in real life. And, the research changes from project to project. For Prisoners of War, he started in on characters before the research, but then when he spent time with real-life POWs, he stopped writing and started to do more research. “There was a lot I changed because I met the people.”

In one example, a POW discussed how the physical aspects, such as torture, wasn’t as difficult as the solitude. The subject told Raff, “You didn’t know if that door was ever going to open again. He was being pulled from his door to be tortured, but he felt joy, because of the human interaction. I could have only known that by talking to him. It changed the way I thought about captivity and prisoners of war.”

Likewise, if he’s ever feeling stuck in the creative process, he returns to the research for inspiration. “It’s part of the process when you write a true story. You take some dramatic liberties that are true to the theme, but not necessarily exact to the timeline but I always go back to the people, the research, to make it as credible as possible.”

“Sitting in front of that computer, the laptop, the white page, is daunting,” he said. “It’s really scary. I think screenwriters need to have compassion for themselves, which is something I’ve learned recently. Even in the times we live in now, where I have time but feel unfocused, I have forgiven myself for it.”