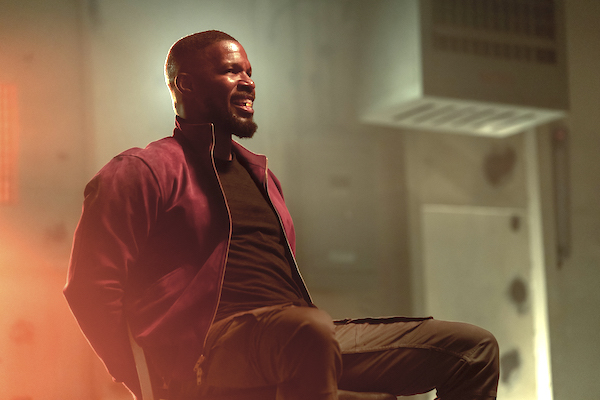 “Strip Back the Layers & Hit a Nerve” Mattson Tomlin, Screenwriter Of ‘Project Power’ & ‘The Batman’

“For me, storytelling came during early childhood. I really loved playing in the woods with my friends, dressing up, and putting on a Batman costume,” recalled prolific screenwriter Mattson Tomlin.

“There was a summer I call my ‘Stand By Me’ summer, where the kids I was growing up with were older than me and started to age out of that, but I wasn’t quite there. I felt like I was losing my friends, but I realized I could get them to start playing again if there was a camera around.”

As of 2020, the screenwriter has credits on the popular Jamie Foxx-led action-thriller Project Power, with additional credits on upcoming films like Little Fish, Capcom’s Mega Man, and Matt Reeves’ new film, The Batman.

Between 2008 and 2020, Tomlin created a series of shorts and sold a handful of screenplays, but for the most part, he had yet to make a name for himself in Hollywood. This led him to a powerful decision.

“Ten years ago, I was a student at SUNY Purchase in upstate New York, in the Film program, making short films and trying to get attention,” began the writer, “when I realized I didn’t have the skills to really make it.”

Tomlin clarified, “I knew how to make films, but I didn’t know how the business worked. So, a good friend of mine told me to go to AFI. I went there to study Directing. AFI is a good school because it kicks your teeth in and shows you what you don’t know.”

Through more ups and downs, Tomlin realized he might not get the opportunity to follow in the footsteps of his favorite writer/directors like Kevin Smith, Robert Rodriguez, and Darren Aronofsky. “That dream to make a film and win Sundance to be a big deal director, in some ways, is kind of dead. It’s not the 90s, and now, everyone has the ability to make a movie in a way that they didn’t back then.”

He realized he was “out of favors” and his lack of connections in the industry made him rethink the best way to stay in the game. “At AFI, there’s this saying, ‘Write your way to the table,’ and that proved to be the mantra that unlocked everything for me.”

Around 2014, Tomlin fell back into his love of writing. “I started writing ten scripts per year. That began my regimen, but I also gave myself permission to be bad. During that first year, eight of those ten scripts didn’t work. They were bad, but two of them were good. The following year, maybe four or five were bad. Eventually, I ended up meeting my manager who started to, not necessarily sell my work, but get it attention.”

Through writing just under a dozen scripts per year, Tomlin eventually booked an agent and manager, plus he found himself on the Blacklist for the first time. In addition, he also started to get paid gigs coming in to polish up work, create storylines, and fill in the pieces for potential scripts.

In order to produce such prolific work, Tomlin got into the habit of writing down everything. “I have my phone on me at all times, so I use the Notes app for whatever it is – a logline, scene idea, line of dialogue.”

Within a few weeks, he said he had about a hundred pages of idea fragments that he could piece together. “You have these fragments of characters, and that was the basis of a script. Then, I wrote towards what excites me.”

The first year, he said many of the ideas were similar to the offbeat comedies of the Coen Brothers. “They got me attention because it was clear I had a voice and understood story. But they weren’t real movies.” He was attracted to the idea of superpowers, but not necessarily the comic book genre.

“I sold Project Power in October of 2017. That was the moment I was really getting somewhere with this. It was happening. It’s about hustling too. You never know what’s going to get hit, what’s going to get made, and now I’m in this crazy place where I have a movie out.”

The Origins Of Project Power

The fragment that led to Project Power began with a single idea. “I think the first thing I wrote in my notes was about Robin (Dominique Fishback). The idea of having this young black rapper who sells a drug which is special.”

At this stage, he didn’t know what the drug was, or even that it would lead to superpowers, but the character stood out to him as someone who might fit into this big action figure, while still including a fresh spin on it.

“The pill idea and the superpowers came quickly afterward, and then it was just many, many drafts – on my own and later with producers or directors or studios – we tweaked the mechanics to make the movie we ended up making.”

Pivoting from Coen-esque dialogue to a superhero voice was quite the leap. “I think it comes from a place of having to find your own confidence.”

“Even if I were directing the movie, actors make the characters their own and bring things to the table, so I let go of this idea of voice. It’s more about writing it, believing in it, and feeling like there’s a real heart. That’s the voice.”

Through this newfound confidence, he was able to care a lot about the project, but not to think of it as the precious thing he invested everything in. “Then I could write small things, big things, things that took place in one room, things that take place in outer space, and that’s where I still live today – all over the map.”

“I’ve written screenplays where I get to the end of the first draft and it feels pretty dead. It doesn’t have the sense of fun or the sense of a strong character in it. I think when my screenplays don’t work, it has to do with the characters being the idea of a person, rather than actually letting them be a person.”

Over time, some of these scripts come back to life, but with others, it might mean changing the story or even letting the characters change the story. “Sometimes, you have to make choices and do a big overhaul.”

Whenever Tomlin gets stuck on something, he literally looks down at his hand, where he has a tattoo that reads “Who cares?” This doesn’t mean shrugging off something, but rather examining “who cares” about what’s happening on the screen. Who does this affect? What does this do for the audience?

“It’s the prompt I give myself while writing, to strip back the layers until I hit that raw nerve. If I can find the ‘who cares?’ of an idea, then I know it will be somewhat universal, somewhat primal. “If it connects to me, it will connect to others as well.”

Tomlin added, “Everybody has a story and we all go through certain types of pain and joy. There are human experiences we all share, one way or another.”

In one primal example, he mentioned the notion of parents. “We all have parents, so there are so many movies about fathers and sons, or mothers and daughters because that’s such a primal relationship. Everybody can get on board with this and relate it to their own life.”

He concluded, “It is the writer’s job to care and make the audience to care. You have to bleed for it.”

After writing so many screenplays, the screenwriter said the biggest change of all came in the form of “confidence of craft.” He said, “There was a time when I was more concerned with the rules or what people thought, but now I view writing like playing an instrument.”

He added, “When you’re learning how to play, you focus on technique and you’re very methodical, but there’s no soul. You’re just trying to figure out how the thing works, but then you start to achieve proficiency. Then you work to mastery or something where it looks effortless.”

Tomlin doesn’t consider himself a master, but he views his journey as one to mastery. “Screenwriting will always be a ton of work, but I know how to play the instrument and I know what a movie is, so I can improvise, break rules because I know why I’m breaking the rule. The only real rule of screenwriting is: Don’t be boring. As long as you’re not boring,” he said, “people will let you get away with anything.”

Despite the overall output from this screenwriter, he does still feel stuck from time to time. To some degree, bouncing between projects helps ideas shake loose, but other times, it’s just about taking a break.

If writing fifty screenplays feels overwhelming, it should, but that doesn’t mean it’s a waste of time. You could view this is a training exercise, similar to attending a university.

“There’s a script I wrote in 2015. No one was interested in it. Then, earlier this year, somebody bought it and it’s on a path to getting made. That, to me, says nothing is really ever dead.”

One executive who read the script in 2015 actually remembered the story, then four years later got to the point where she decided it might now be a fit for the ever-changing zeitgeist that is Hollywood moviemaking.

“On one hand, things come around and life can be breathed into it by other people. Also, writing is a skill. You get better at it by doing it.”

“Time only gets wasted if you’re looking for an immediate result. I look at my process and I look at everything I’ve gone through and I get why it took all the steps. I wouldn’t give those steps up.”

In addition to understanding that it simply takes time to get good, creating a prolific amount of work puts less pressure on each individual screenplay.

Whether you call it Stoicism or Pessimism, assuming nothing will happen actually helps the journey. “That’s served me well because a lot of things don’t work out. For every success that I’ve had, there have literally been ten failures behind it. I don’t let those failures trip me up.”

“If I get a call that says, ‘This thing you’ve been working on for three years isn’t happening, sorry.’ That hurts and it stings, but I don’t let it stop me. That’s fine because I’m already working on my next five things anyway.”

Tomlin said, “You have to have the resiliency to get back up. The quicker you get back up, the more productive you can be. You can take more shots because you’re up on the ground more.”