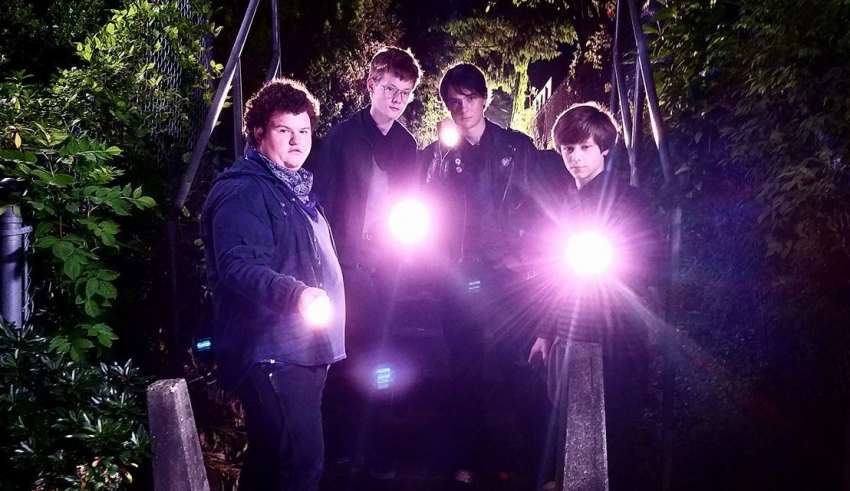 In keeping with the current spate of eighties-themed films and TV shows, Summer of 84 is slow-burning thriller film starring Rich Sommer, best known as Harry Crane from Mad Men. Creative Screenwriting stepped out to chat with the screenwriters Matt Leslie and Stephen Smith about their writing process from script to screen.

Screenwriter Matt Leslie was involved in website design when he discovered the book, Story, by Robert McKee. Soon, he went with a friend to see McKee at a local seminar. Leslie’s writing partner, Stephen Smith, was originally interested in animation when he discovered screenwriting.

In 2011, the duo teamed up to start writing professionally, which consisted of drafting eight spec scripts, a pilot, and “a million treatments.” In their debut film, Summer of 84, a group of teenage friends suspect their amiable police officer neighbor is actually a serial killer. As the group starts to uncover the truth, their findings become more and more dangerous.

The film stars Mad Men’s Rich Sommer, along with newcomers Graham Verchere, Judah Lewis, and Caleb Emergy. In addition to the team of screenwriters, there was also a team of directors attached to this project. RKSS (Turbokid), made up of François Simard, Anouk Whissell, and Yoann-Karl Whissell, have somewhat of a hive-mentality as they direct as a “family.”

In both collaborations, the screenwriter duo and the director trio understand that “everything you do should be for the good of the film.” This helped Matt Leslie and Stephen Smith pen the story, and RKSS get in the right mindset to shape this film.

“It wasn’t like we were setting out to be horror writers,” said Matt Leslie. “We just had this idea—back in 2014—to write this thing. We knew we basically wanted to make The Goonies if it got scarier. Or, something like Disturbia, but the real version. Like what would actually happen to these kids? It wouldn’t be a happy ending.”

The duo made sure to spend a great deal of time on dialogue so the kids would sound authentic in the movie. Getting into Sundance and discovering what works cinematically, pushed the duo to start writing another film called The Harrowing, which is somewhat similar to Rosemary’s Baby. This screenplay has also just been optioned.

“For now, I think horror is the sandbox we’re going to be playing in,” added the screenwriter. But, the duo doesn’t feel pigeonholed as genres can be mixed more these days, such as sci-fi horror or action-thriller.

Pitching Without An Anchor Actor

At first glance, the film mimics stories like Stand By Me from Stephen King or the recent Netflix hit, Stranger Things, but the comparisons do not make it any easier to pitch a movie without a lead actor involved. “A lot of companies have their business model formed…so if you don’t have a star like Nicholas Cage or Bruce Willis, you can’t get the money to make your movie,” said Leslie.

The screenwriters were able to get the directors attached to the project in 2015, but they still had difficulties getting the film made. “We got a lot of passes because there wasn’t like an adult star anchor role,” added Leslie. “Even the role that Rich Sommer (as Wayne Mackey) plays in our movie—it’s not a huge role.”

Luckily, however, Gunpower and Sky loved the script and the attached directors, RKSS. They didn’t care about the formalities. Instead, they simply wanted to get the movie made. “Let’s cast these kids, find ourselves a serial a killer, and go from there. They were very supportive of the whole process.”

Stephen Smith said, “When we set out to write this, we didn’t want it to be a who-done-it type of movie. We didn’t want it to have a ton of red herrings. We basically wanted to live in the mind of Davey Armstrong (Graham Verchere), our main character. He’s convinced it’s this guy right off the bat.”

According to The Hollywood Reporter, “Mystery-wise, the film teases viewers pretty effectively, with plenty of jolts that suggest the boys are on the right track balanced by other signs they’re making something out of nothing.” Creating the balance between the boys’ fact and fiction was an interesting dynamic for the mystery.

The danger within the film is whether or not this boy is correct in his assumptions. Throughout the movie, he’s trying to convince his friends to come on this journey with him and to believe his mindset. Then, the screenwriters would toss in landmines to throw off Davey, and therefore, to throw off the audience.

In addition to the powerful screenplay, the writers had to help find amazing young actors to portray these difficult characters. Luckily, Leslie’s background as a development executive for Matt Alvarez (Straight Outta Compton, Ride Along) helped him come on as a producer for the new film. They brought in Canadian directors and a Canadian company to land Canadian tax incentives.

“We felt super fortunate because we didn’t have a ton of money. We couldn’t do like Stranger Things did with these crazy casting sessions for months, trying to find these kids.” They ended up working out a deal to hire two Vancouver kids and two LA kids. When they got to Vancouver and saw the kids in wardrobe and felt they were perfect.

For Smith, this was his first time on a movie set. “To see our kid actors, I was meeting them as they were walking up to do their scene,” said Smith. “They’re fully in costume [and] fully in make-up. It was literally like meeting the characters we had worked on for so long. It was a privilege a lot of writers don’t get.”

In terms of the screenwriters’ process, they actually work completely over the phone and Internet. Smith is near Milwaukee and Leslie is in Los Angeles. To defeat this physical obstacle, they spend a great deal of time on the phone. Once they confirmed which idea to pursue, they started an extremely detailed outline.

“Usually, we aim for about twenty pages for an outline,” said Smith. “Sometimes it bleeds over. I think we had one close to forty pages. It’s basically like every scene of the movie, what the beats are, very locked down. Because when we then go into the writing phase of it, we break off.”

Generally speaking, Smith and Leslie break up the scenes 12 sections. Then, one will write the odd scenes and the other will write the even scenes. The sequences break down to 8-12 pages each for a total of 96-144 pages in the draft. Then, they switch and edit the other writer’s sections or build upon those sections. Then, it’s time for another 5-6 hour “late night marathon call” to discuss what’s working or what’s not.

The goal is to eventually create a draft they’re willing to show their representation. In terms of a balance to their partnership, there are strengths and weaknesses, but Leslie creates Smith with having a photographic memory. As such, Leslie pitches ideas and Smith decides if they work within the greater picture of the story.

Finding this system of checks and balances helped the duo get a film ready for production and beyond. Before, they both spent a lot of time writing, but it wasn’t until they developed a collaboration that they got a film made. “I feel like we hit the ground running,” said Leslie.

They had talked about writing together before. Smith called Leslie and said he found a contest called the Script-a-thon. The premise was to write a script in 30 days or less. Smith pitched the idea for a high-concept rom-com and Leslie quickly agreed to help pen the script. About 28 days later, they won amongst the other 1,200 entries. They knew they had something.

Today, they feel like they know what they’re doing in terms of preparation. “When we came together, it felt like the right fit. Our strengths and weaknesses offset each other,” said Leslie. Smith added, “We have a short-hand that has developed between us over time.”

Based on their previous scripts and Malcolm Gladwell’s mention of the 10,000-hour rule, the duo believes they now have a better idea of how to spot problems. Smith said they can see a small incident and know it will hurt the script 50 pages later. “We work quickly to catch the ripples, which I think saves a lot of time,” said Smith. This also helps them realize when a high-concept idea will or won’t play as a full-length feature.

This article has been condensed. Listen to the full audio interview HERE, which includes the screenwriters and the directors.