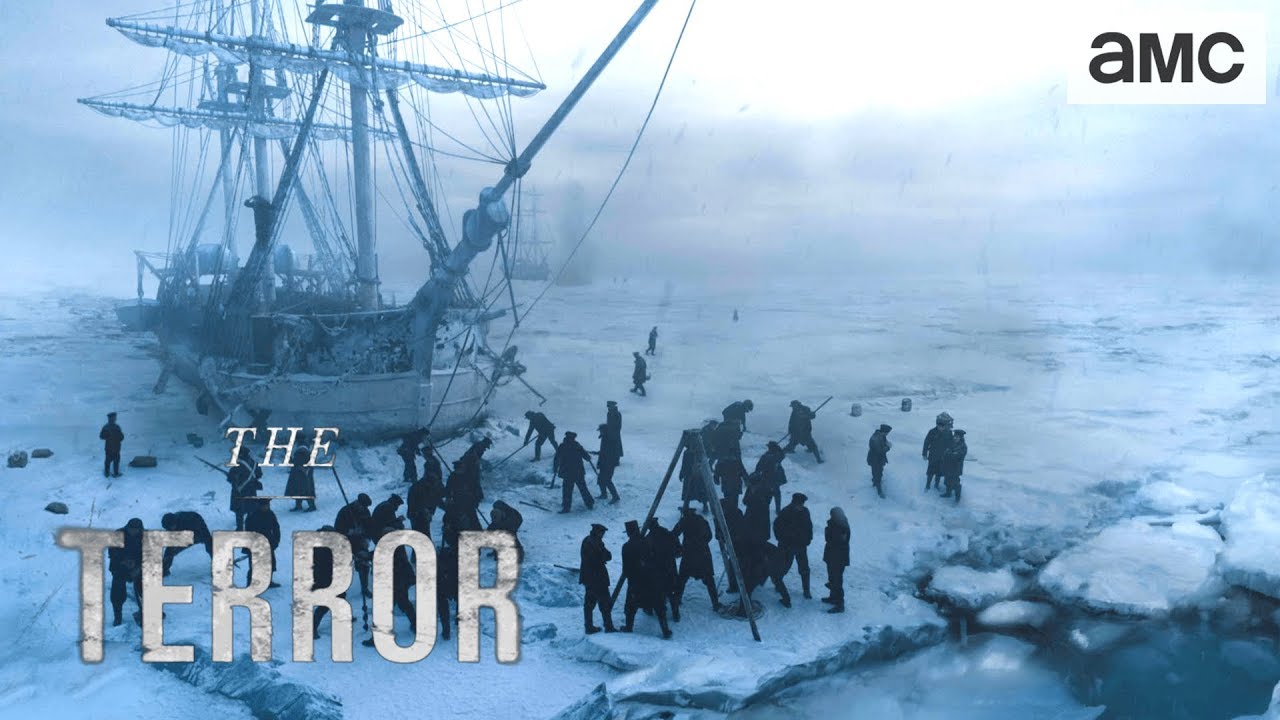 “The Terror” chills to the bone in setting and style

On paper, the adaptation of Dan Simmons’ 2007 novel “The Terror” would seem to be a tough sell. It is a period piece that takes place in the mid-nineteenth century. Its setting is the brutal Arctic. And its stoic British naval characters are a hard lot to like. Yet, even with all those barriers, the AMC miniseries makes for utterly compelling drama like few shows on TV these days. Only midway through its 10-episode run, the intensity of “The Terror” has built exponentially with each new chapter. One can only imagine how nerve-racking the back half of the season will play out.

To experience “The Terror”, one must closely watch every second of the series. Not only is each frame chock full of intricate production design and details that foreshadow disturbing events, but the cast says so much in every scene without uttering a word. There is a sly, “blink and you’ll miss it” quality to it all too, especially when the show sneaks in glimpses of the monster at the core of its horror. Despite a dour tone and methodical pace, the show actually is exquisite fun, teasing its audience in what it reveals to them, all the while refusing to be straightforward like so much of typical television narrative.

The fictional tale concerns the 1846 expedition of two British naval ships on a mission to discover a northwest passage from the Atlantic to the Arctic Ocean to the Pacific. The HMS Erebus, the lead ship, is commandeered by Sir John Franklin (Ciaran Hinds), the excursion’s main captain. The other ship is the HMS Terror and it’s led by Franklin’s old friend, Francis Crozier (Jarred Harris). The two have a long history together, spooled out in numerous flashbacks throughout the series, but despite their camaraderie they are hardly chums.

Franklin is a well-meaning military man, but he’s more pompous than competent. He juts out his chin, but his mouth is weak, and Crozier sees all of his insecurities. Crozier is vulnerable too, not just because he’s second-in-command, but because Franklin’s niece has rejected his romantic overtures. It’s a complex relationship, both friendly and foul, and the two veteran character actors make the most of their rare lead roles. Harris, in particular, is droll perfection as the reluctant traveler assigned to his friend’s excursion. He’s a crusty actor who can do more with a raised eyebrow than most can do with pages of dialogue.

Not long into the journey, a decision must be made on whether or not to continue journeying into the wild. The cold is a killer and if the waters freeze underneath them, the two ships could be stuck in the ice for months. Franklin is counseled by Crozier to wait out the winter season, but third-in-command James Fitzjames (Tobias Menzies) pushes him to be more brazen. Franklin, trying to appear strong and decisive, makes the call to proceed, and it seals their doom. Within a few days, both ships are stuck in the hardened waters with no hope of extraction until the spring’s thaw.

The failing of machismo is one of the story’s big themes, and Franklin isn’t the only one shown to be a pigheaded soldier. Nary an officer or enlisted man has a grasp on what they’re up against, and as the temperatures continue to lower, along with the food supply, the men lose more and more sense of their roles as “Englishmen.” Soon, tribalism sets in and the childishness of the men could give the students in Lord of the Flies a run for their money.

Complicating their plight further are a polar bear-like monster that is hunting them, and the Eskimo woman Lady Silence (Nive Nielsen) who may or may not hold the key to the beast’s motives. Like the shark in the movie “Jaws”, the creature is all the scarier because we see so little of him. Even during one extended action sequence where the monster climbs aboard and chases a hapless officer up the mast, the editing only gives us glimpses of his out-sized limbs and excessive size. Is this bogeyman an animal, demon, or some hybrid? Whatever it is, it seems to be intent on killing the men one-by-one if the cold doesn’t get to them first.

At times, this series recalls the 2003 movie “Master and Commander: The Far Side of the World” with its detailed log of life at sea. Like that film, this series showcases all of it in exacting detail. From the china patterns on the posh officer’s dinnerware to the old school medical instruments snipping off frostbitten toes, this is a precise recreation of the period. At other times, the series is reminiscent of the Schwarzenegger adventure “Predator” from 1987. Both that film and this series are amused by the arrogance of its soldiers who think that they can outwit their surroundings, let alone hidden enemies.

However, “The Terror” seems to have the most in common with John Carpenter’s remake of “The Thing.” The tundra, the remote setting, the macho men losing their grip on their mission, as well as their trust in one another – it has striking similarities. But while Carpenter’s characters kept faith that they could defeat the monster in the end, such convictions seem doubtful as “The Terror” continues. Dread and doom are starting to chill the crew to the bone almost as much as the subzero temperatures. Still, with half the series to go, something has got to give, and it’s a credit to the narrative that it’s hard to see just how this series will conclude.

At times, the message in “The Terror” seems to be as cold as the setting of the story. Foolish is the man who thinks he can best Mother Nature. In some ways, “The Terror” even works as a stinging commentary on the perils of ignoring climate change. Of course, like most tales of horror, this one indicts man as the true villain, no matter what foil he’s up against. Those aboard the Erebus and the Terror may think that the polar bear is their greatest threat, but it’s likely that the ‘most dangerous animal of all’ will ultimately condemn this mission and crew. Stay tuned. Watch the trailer.