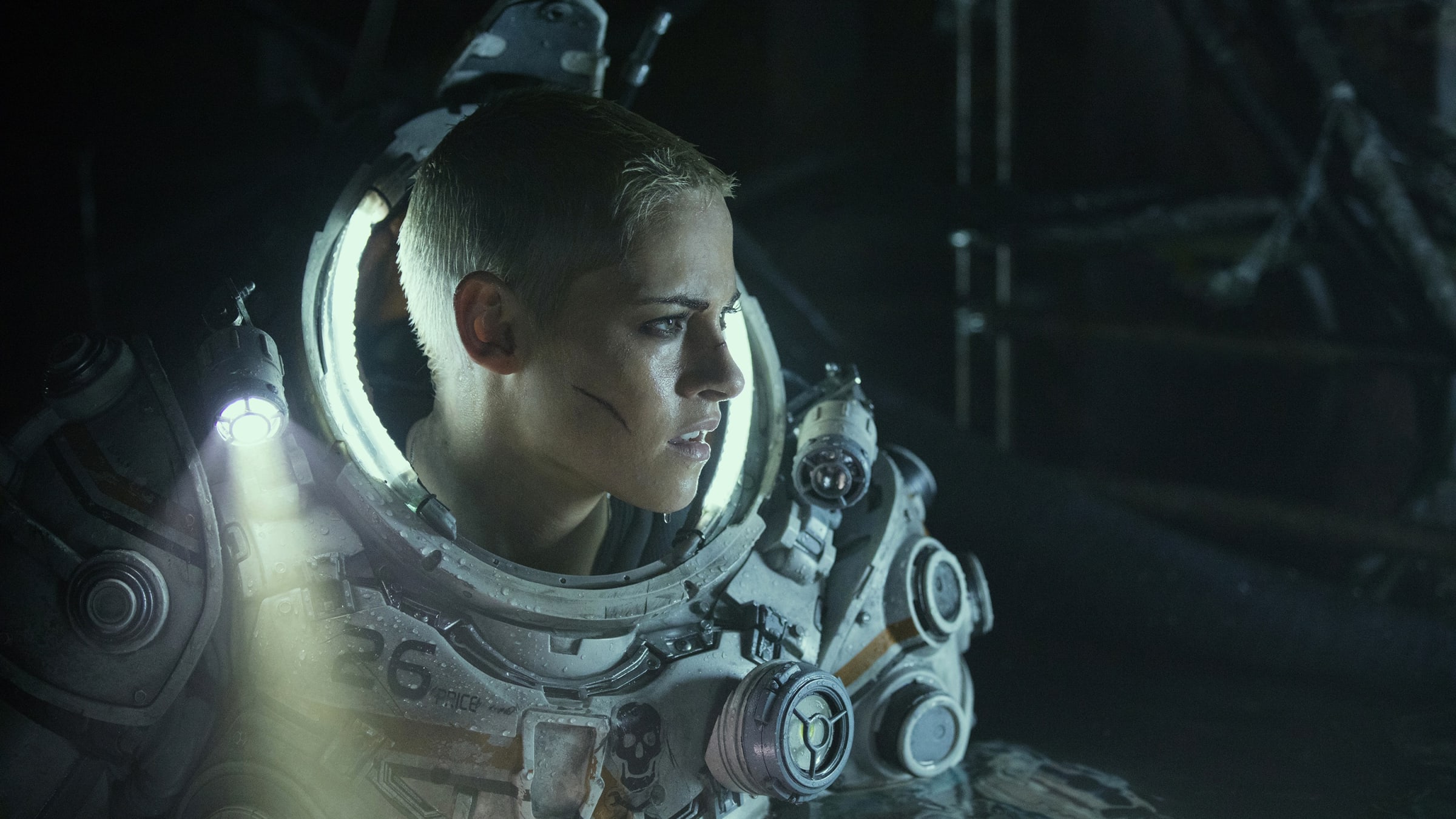 Too many films have drawn inspiration from 1979’s Alien over the years, including countless C-list rip-offs not worth mentioning. The newest is actually an A-list production entitled Underwater and it stars Kristen Stewart in her first pure monster movie since the Twilight series made her an international star. With such talent comes superb production values, the kind you rarely see in the genre, and it’s an impressive looking film, by and large. Unfortunately, this riff on Ridley Scott’s classic misses on almost every other chance to do more, dig deeper and set itself apart from that long list of Alien imitators.

The short-shrift starts immediately by using expositional newspaper clippings to set up the backstory during the opening credits. The headlines tell us that a giant conglomerate called Tian Industries has built the Kepler 822 Station, an underwater digging rig to find new sources of energy. (Giant corporations are never good in these sorts of things.) We’re told that over a thousand workers live year-long 7 miles under the surface of the Pacific Ocean. One of them is Stewart’s mechanical engineer Norah Price.

She’s introduced in skimpy skivvies as she brushes her teeth in a locker room bathroom. (Echoes of Sigourney Weaver’s Ripley wardrobe in Scott’s film are purely intentional.) Price is fit and fierce with a dyed-blonde pixie, and her voice-over talks about isolation and the unknown in such jobs. Then it’s off to the races after a minute or two as an earthquake rocks the station and destruction rains down upon her.

She and co-worker Rodrigo (Mamoudou Athie) manage to get to safer quarters, but not before seeing whole sections of the base collapse and kill a number of colleagues. Still, the two manage to rescue Paul (T.J. Miller) from under some rubble, and soon they join up with three other survivors: Captain Lucien (Vincent Cassel), engineer Liam Smith (John Gallagher Jr.), and biologist Emily Haversham (Jessica Henwick) to search for a way out.

With the station falling apart around them, and the threat of drowning or air pressure exploding their brains at any moment, that’s already a lot to jangle the nerves in this claustrophobic thriller. But rather than ape The Poseidon Adventure or Das Boot, the filmmakers want this to be another Alien, so screenwriters Brian Duffield and Adam Cozad stack the stakes with all kinds of alien sea creatures jumping out of the dilapidated station and dark waters. Too few exits, too many ways to die.

The premise, Stewart’s wardrobe, and even the lived-in “dirty” quarters of the station are already too on-the-nose in recalling Alien, but having the creatures go from baby aliens to a ginormous mother monster, well, that is simply too close to its 1979 inspiration. Perhaps Underwater wouldn’t have felt so derivative if there had been more character development, but the small cast is given very little to do in that department.

Stewart is spunky and knowing, but why does she seem to be the only one who’s got a handle on matters in every scene? Cassel, one of France’s best actors, plays a captain who feels less like a military man and more like a life coach. “Keep going!” and “You can do it!” are the gist of most of his dialogue. Henwick has her dramatic moments, swerving nervously between stability and panic, while Miller cracks wise for comic relief, but an excellent actor like Gallagher is given almost nothing to play. All of them spend too much time in their underwater diving suits, also reminiscent of the costumes in Alien, and that keep us arms-length from the actors in them all the more.

Director William Eubanks started in the business as a cinematographer and the look of the film is strong, vividly murky and foreboding. The film’s use of sound design makes all the jump scares effective, and the CGI is wholly convincing. You believe it’s all underwater, and not created in a post-effects suite. But by the time the remaining survivors are slowly schlepping along the floor of the ocean, counting down markers to the escape pods, the film has become just as much of a frustrating slog.

Both Alien and The Poseidon Adventure worked because they spent hefty screen time developing the characters before disaster struck. Those films also kept their protagonists in street clothes, for the most part, making them all the more vulnerable to the elements and perpetrators around them. There are moments when the characters here manage to escape the water momentarily, take off their diving helmets, and breathe. If only the film was willing to breathe more as well and take some real time with those in the story we’re supposed to be invested in.

Check out the trailer for Underwater below: