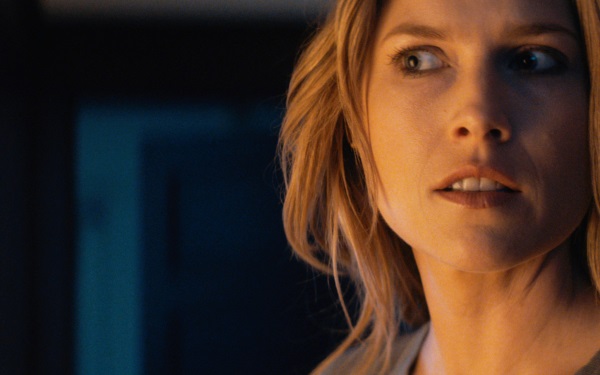 In their first film, co-writers Alistair Legrand and Luke Harvis invite audiences to experience The Diabolical. The sci-fi thriller puts a new spin on films like Poltergeist – or perhaps aspects of the Paranormal Activity – with science-driven ideas rather than untainted acts of the supernatural.

Madison, played by Ali Larter (Final Destination, Varsity Blues), is a single mother who experiences an ever-changing nightly presence. When her children start to see the threatening presence, she turns to her scientist boyfriend and a small panel of paranormal experts to determine the source of the eerie occurrences.

What led each of you into screenwriting?

Alistair Legrand: Like most filmmakers, I’ve wanted to make movies since I was a little kid. I’ve always loved writing. In this case, Luke and I have known each other since we were about twelve, and we’ve been writing screenplays together since then. We actually started taking it seriously about five years ago.

Luke Harvis: I think if there was one moment for me, it was probably when I was around sixteen and would cut school to go to the movies. That happened a lot and it made me want to make movies.

AL: So we started taking it seriously. I was working on commercials during the day and Luke was working his day job while we were working on scripts at night. Eventually, it became our full-time job.

When you were skipping classes and falling in love with film, what kind of movies did you enjoy and what were some influences for The Diabolical?

LH: Maybe not the biggest impact for this particular film, but the one movie that turned me toward the business and opened up that world for me was Jurassic Park (1993). It was this huge spectacle. I probably went to see it nine times and drug my parents, or anyone who would go with me. I was just fascinated by it.

AL: Not to mention your dad showing you Full Metal Jacket (1987) at way too young an age.

LH: That’s true. I did watch that way too many times, starting around age ten.

AL: In my house, we only had one night when we could watch movies. On Friday nights, my mom would pick a movie she wanted us to see, so I grew up with The Red Shoes (1948), 2001: A Space Odyssey (1968), and this movie called The Vikings (1958), which were all pretty transformative. I really wanted to make movies when I realized there were a writer and director behind the camera.

Where did the idea for The Diabolical come from?

AL: It’s getting harder and harder to say where it actually hit me, but I think it came from watching Poltergeist (1982) one night. That and my obsession with time travel films and teleportation made me want to tell a new type of ghost story. I wanted to write it so I texted Luke and we started working on it immediately to flush out the central idea.

Did you sell the pitch first or the actual screenplay?

AL: I actually went into a meeting for another project called Toe. They liked the idea but asked if I had anything ghost-related, so I pitched the model that became The Diabolical. A few weeks later, Luke and I came up with a treatment and we were off to the races.

Without giving anything away, did you think of the twists first or did those come later?

AL: There are several twists. Some came later but the central idea was definitely the twist. Essentially, it’s not what you think it is. It’s not something paranormal. That was the original idea: let’s find a new way to tell why things move in houses and why they get cold and why doors can slam on their own and how can we back those things up in a way that’s grounded but still entertaining.

In addition to writing after your day jobs, what is your routine in terms of writing with a partner?

LH: We’re usually in the same room. I don’t know if other writing teams do that. I think we just started that way because we didn’t know a different way to do it. We basically just pass drafts back and forth as a process. Before we even start an outline, we actually just talk about the idea for a long time. We basically have a month-long conversation to discuss what we want to write about and how we see it developing.

AL: The benefit of having a writing partner is having another brain in the room to discuss the beats and characters of the film. It’s nice because I’ll write ten pages and then pass it over to Luke and get instant notes or corrections; then Luke will add his own things or even take over for ten pages to knock out a draft. Before the actual writing, we collaborate a lot on the outline. We usually use Google docs so we can see the same draft.

Ali Larter as Madison in The Diabolical

So this is your first movie together but how many screenplays have you written?

AL: Five that we would actually have people read and a lot of terrible ones before that. Now we’re more comfortable with the structure and actions within a screenplay. It’s definitely a learning process: the more you write and the more scripts you read, the more you learn.

Are these other scripts within the same thriller sci-fi genre?

LH: They live within the same genre field but there’s a different take on each one. So one might be a thriller while another is more supernatural.

AL: We like to combine genres, so it can be science fiction/thriller/horror all in one big soup in the end.

What’s the most difficult step in the writing process?

AL: Definitely the second draft. That’s where it starts to feel like homework. You have to surge through it and get past all of your insecurities and fears about what a horrible writer you may be.

We basically try to finish our first draft as quickly as possible so we have something written down: we call that the vomit draft. After that is written, we’re left cleaning up a pretty messy room. It starts to feel like work, but then new ideas arise and it becomes fun again. There’s just that little hurdle we have to get through.

LH: There’s a point in every screenplay where you question yourself and wonder if you’re writing the worst thing ever written.

AL: We ask each other that question all the time. We think what we’ve written is terrible, but we’re also stubborn and hate to quit things, so we finish most of the screenplays that we start.

LH: I almost think that asking yourself, “Is this the worst thing ever written?” is necessary because it makes you take a hard look at what you’re writing and think critically about it. It’s important to have that drive and to answer that question.

AL: To add to that, movie titles are the worst things to come up with. The worst. All of our works start as “Untitled” and stay that way until the last minute. Movie titles are definitely our hurdle.

How did directing impact the writing process?

AL: I love it. That’s how I hope to mainly work in the future. It’s nice because I know the material frontwards and backwards unlike a director who hasn’t written the script. I can help the actors with character backstories or with any feelings of insecurity on set. That’s the most important thing. You can’t lose your actors so you need to keep them engaged. You need to know the material better than anyone else. Plus I can tinker with the script until my heart’s content. Luke’s also around so in case the scene is not working we can always get in there and rewrite it.

In your opinion, what makes a good story?

AL: Keeping the audience engaged. If you’ve got someone reading your story, then it’s important for scenes to connect: Scene One needs to connect to Scene Two and if Scene Three is an island, you’re going to lose people.

LH: I agree with that. This can be a stock answer but you need characters that you want to follow from page to page. It’s hard to keep reading when you’re groaning every time a character opens his or her mouth.

AL: It’s also important to keep characters three-dimensional, even if they have only three lines in the script. It’s important to ensure that the audience remembers each character in an interesting way so they care when the character is in peril or being chased by a monster.

As a duo, you have a unique perspective since this is your first film. What advice do you have for young writers?

LH: I’ll start with a really boring answer that I wish someone had shared with me when I was in film school. I had a full time job before I started writing full time and I wish I had saved 10 percent of each paycheck. If you have a little cushion, it is easier to follow your passion. Save your money.

AL: My advice is equally stereotypical. Keep writing. Don’t be a perfectionist. Don’t think that the first screenplay you write is going to be absolutely perfect. You need to write ten horrible screenplays. Enjoy how bad they are. With every word, you’re learning and getting feedback from friends. Enjoy that process. Just try to make something good.

Do you ever struggle with writer’s block?

AL: I wouldn’t call it writer’s block. It’s more like not wanting to work that night, but you have to put your foot down and start hitting the keys. It doesn’t matter if you’re hung-over or sick, at the end of the day you’re going to feel better even if you only write a single sentence.

LH: Right. Even if you only get a page or two finished, that’s something. With writer’s block, you just have to get back into that groove and start writing.

What’s next for you guys? Anything else you would like to share about The Diabolical or another upcoming project?

AL: We’re really excited about a ton of different projects right now. I think the next movie is going to be something called Clinical. It’s a really intense thriller that we’re very enthusiastic about. We also have another called Security that we’re working on where some characters are trapped in a self-aware version of hell. Right now we’re just trying to pick the right project.