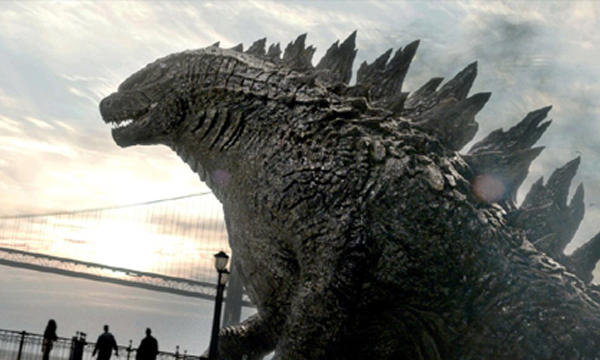 The Fault in our Screenplays: Godzilla’s Missed Opportunities

Aristotle’s Poetics is most commonly known as the place from which we derive three-act structure, but his guidelines for what occurs as a character comes to a new understanding within that structure are also pretty awesome.

Briefly, here is a paraphrasing of Aristotle’s basic recommendations for protagonists:

They should have an “unmerited misfortune” in their past. A terrible circumstance over which they had no control. The resulting psychological damage of this misfortune results in a “tragic flaw,” the unhealthy character trait that has been holding them back in life. Thus, a redemptive three-act structure finds the protagonist unable to ever change the bad thing that happened to them long ago, but, by contrast, fully capable of overcoming the flaw that resulted from it.  The past doesn’t change, but the way we behave now can change. This is the message of all stories that concern themselves with a protagonist’s inner journey. It’s a lesson from which we can all learn, and it is why stories of overcoming obstacles have been so resonant with audiences for thousands of years.

Not all movies concern themselves with this kind of subject matter, but when they attempt to do so and fall short, the mysterious void left by the lack of oomph is apparent, no matter how loudly an animatronic radioactive dragon can be made to bleat.

Yes, every once in a while, a movie arrives that squanders its opportunities for greatness so transparently that it makes it a great teaching tool. The admittedly decently entertaining 2014 Godzilla reboot is, nonetheless, that film.

Let’s take the narrative, if not scene-by-scene, then step-by-step.

Godzilla begins with a gorgeous, heart-rending unmerited misfortune: Joe Brody (Bryan Cranston) must watch his wife die in a nuclear accident in order to save the world, and his young son, from destruction. Dear God, what a thing to have to live with! And since many of us were drawn in by a marketing campaign that seemed to paint Cranston as the movie’s star, our scriptwriter’s blood should be getting us pumped.  Won’t it be amazing to watch Joe, haunted by this memory his entire life, take the length of the narrative to come to some closure? By exposing the conditions that created Godzilla and finally letting go of his grief?

Yes, it would be, except Joe is not the protagonist.

For the moment, his son Ford Brody steps into that role. It doesn’t help that Aaron Taylor-Johnson conveys virtually nothing as an actor, but let’s roll with it.

So, now Ford is the main character, and he thinks his dad is crazy.

Great! Now we have another area for character growth and change that can play out over an entire story. Ford can fight alongside his father and realize the man was right, thereby giving him closure on the terrible event that scarred his childhood.

Except Joe dies by the end of the first act. At which point Ford very quickly realizes his old man was right and makes his peace with him. Thereby closing the door on another emotional throughline.

Never fear, we can find other ways to keep a connective thread going in our tale, right? Unfortunately, there isn’t much there with Ford’s wife Elle (Elizabeth Olsen), who is simply sad to see him leave again as he has just returned from a tour in Iraq (where he was a bomb specialist—more on that later). There is no friction in their relationship that can provide any regret to fuel Ford’s mixed emotions at striving to be reunited with her.

Wait! Ford gets trapped on a transport train with a little boy who is separated from his parents! Bingo! Ford and the boy form a bond throughout the story, and Ford, able to snatch the child from death at the hands of clashing prehistoric monsters, sews up the button on his own past, and can finally let go of the tragedy that took his mother away.

Oh, darn. The kid, after being momentarily lost in the confusion of the Godzilla-motivated train crash, is just as abruptly reunited with his parents. Story thread closed. Not much redemption for Ford, there.

And so the story moves along with Ford in a kind of ersatz hero role, helping the military as best he can to restore order as the giant dinosaurs battle it out.

Then, just as we reach the obligatory mano y M.U.T.O scene in which Ford stares down the evil creature, he passes out before he can complete his mission of defusing the bomb! Thus negating the pains the script took to set him up as a specialist in that very area. We can only assume this occurred so that the sequel can have some backstory (since the nuclear explosion did not take place that far offshore….). Fine, but Ford as a character has already been robbed of any emotional throughline, and now he is deprived of a chance to at least act.

At which point, we realize the screenplay could not provide a satisfying redemption for any of its human characters, because they were not the ultimate carriers of the story’s overall intentions.

At last, we understand who the protagonist of this story has been all along: Godzilla, the misunderstood adversary, who, though he is suffering from the unmerited misfortune of having been the unwilling creation of man’s hubris, transcends the tragic flaw of his resulting aggression by saving a city from destruction at the hands of an even greater evil. He can then glide peacefully back into the ocean to be misunderstood another day.

Now that is a character arc.